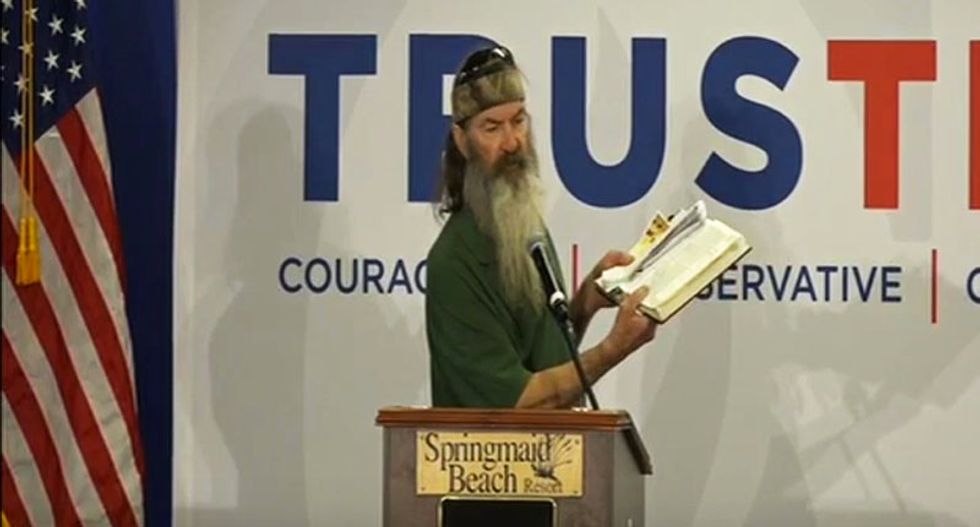 Speaking at a Ted Cruz campaign event in South Carolina on Friday, that star of television reality show "Duck Dynasty" turned what began as a campaign event into something that sounded more like a old-fashioned hellfire and brimstone tent revival -- but without the snake-handling and speaking in tongues.

Pounding on the lectern while holding a Bible aloft as he yelled at the crowd, reality star Phil Robertson promised that America is doomed despite the fact that the Ten Commandments are on display in the "Supreme Court room."

"Give them time. They'll haul them away," he warned before ticking off each commandment and pointing out that he believes they under-gird the American jurisprudence because this is a "Christian nation."

Turning to the candidate he endorsed, Robertson compared Cruz to the late Justice Antonin Scalia saying the Texas senator is an "originalist."

"When he reads the Constitution  he kinda takes old James Madisons's advice," Robertson explained, as he stood before a banner reading "TrusTed."

"The strength of this nation will not be this Constitution, but the laws of God that the Constitution is based on. You get rid of God, you get him out and keep him from being your anchor -- when you start allowing men to determine what is right, what is wrong, what is good, what is evil. You let men do it and they do not vet it with through this book," he thundered, "Our founding fathers warned us over and over again, what you will end up doing is saying, 'Well, now I know it sounds like a violation of commandment number six, which says do not murder, but we're just going to go ahead and tell these ladies -- ladies in America -- they can kill their children."

During the 13-minute speech he barely mentioned the candidate before leaving the crowd with his final words: "Vote godly."