WATCH: Marco Rubio says Donald Trump pissed in his pants during the debate 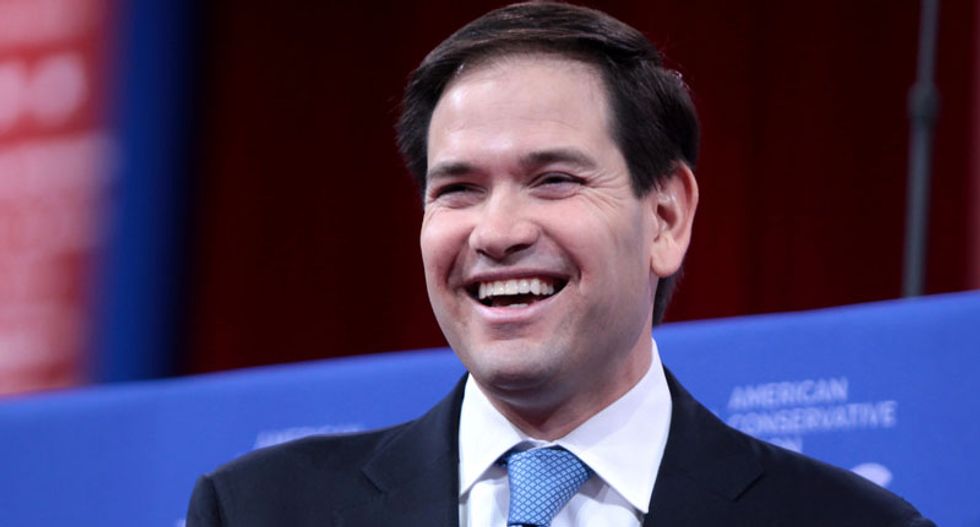 With Trump, 69, increasingly looking to be the party's likely nominee for the Nov. 8 election, Rubio on Thursday night scored his most aggressive debate performance of the months-long election campaign.

Trump's swipes at rival candidates and heated exchanges with others have bolstered his standing in nominating contests and opinion polls. On Thursday night, his rivals struck back.

The U.S. senator from Florida, Rubio, 44, brought up the real estate developer's four past bankruptcies and his use of imported Polish workers to work at a Florida resort, and pointedly suggested the New Yorker would not be where he is today in the real estate business without a family inheritance.

But attacks by Rubio and fellow candidate Ted Cruz, a conservative U.S. senator from Texas, only dented Trump's momentum, according to opinion polls and online betting markets.

PredictWise, a research project that analyzes opinion polls and betting markets, said Trump would comfortably win among Republicans in all but one of 11 states that it measured in the March 1 nominating contests, known as Super Tuesday. Cruz, 45, is likely to win in Texas, his home state, PredictWise said.

PredictIt, based out of Victoria University in Wellington, New Zealand, on Friday gave Trump a 73 percent chance of winning the nomination compared with a peak 75 percent chance two days earlier. Rubio is his closest rival at 27 percent, up only a point from the day before.

With Trump, a brash former reality TV show host, now winning three straight nominating contests in New Hampshire, South Carolina, and Nevada, denial is giving way to a mostly gloomy acceptance among Republicans in Washington that he may have too much momentum to be stopped, especially if he wins big in the key Southern primaries next week.

Rubio, the leading candidate from the Republican establishment, took a swipe at Trump again on Friday.

"Guys, we have a con artist as the front-runner of the Republican Party,” he said at a campaign event in Dallas.

Rubio described various Trump business ventures that he said had failed. "You ever heard of Trump vodka? You have? Well, it isn’t around anymore,” said Rubio, a first-term senator and foreign policy hawk.

Trump has vowed to build a wall on the U.S.- Mexican border, called for a temporary ban on Muslims entering the United States and promised to take a tough stance on trade against China.