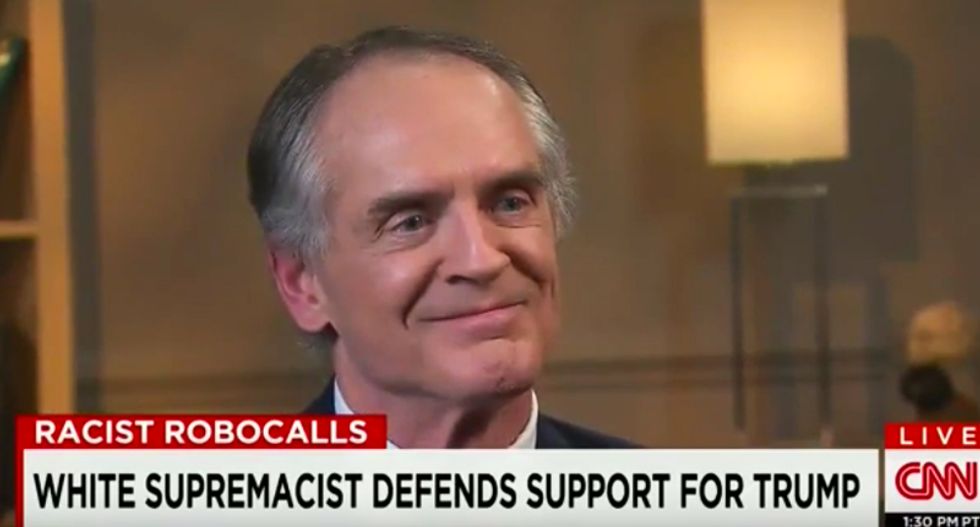 Appearing on CNN, the head of a white nationalist group that that has been behind robocalls supporting billionaire businessman Donald Trump's run for the Republican presidential nomination explained that Trump's immigrant-bashing is very "appealing" to "ordinary white people."

Speaking with CNN’s Drew Griffin, Jared Taylor of white nationalist website American Renaissance began by explaining that "most white people would prefer to live in majority white neighborhoods and send their kids to majority white schools."

"And when Donald Trump talks about sending out all the illegals, building a wall and a moratorium on Islamic immigration -- that's very appealing to a lot of ordinary white people," he said

Taylor saved most of his vitriol for Muslims, asking "Why would we want more" of them since some of them want to "kill us."

“Why would we want more Muslims? Muslims have been a terrible problem for Europe, and here they want to pray five times a day," he explained. "Stop the assembly line, they want foot baths before they go to prayer, they want women-only swimming pool hours, and some of them want to kill us. Why should anyone want more Muslims?”

Trump has  dismissed any connection to American Renaissance, issuing a broad statement saying that his campaign disavows the "support" of all super PACS.

Watch the video below captured by Mediaite: