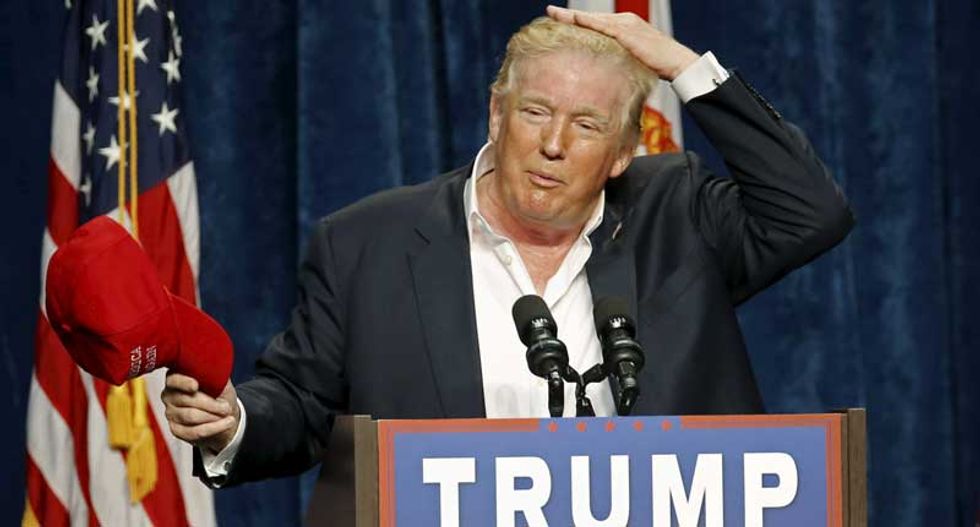 “A fake university,” Rubio said with a smirk. “And you know what they got, they got to take a picture with a cardboard cutout of Donald Trump. That’s what they got for $36,000.”

Three ongoing multimillion-dollar lawsuits against Trump University and its namesake have been going through the courts for years, but as Trump comes closer to the nomination, the scandal is resurfacing both in court and in the GOP primary. The suits focus mainly on the deceptive marketing tactics and false promises of Trump U that left many of the plantiffs tens of thousands of dollars in debt.

In court filings last Friday, lawyers in one of the civil suits named Trump as one of their witnesses, meaning the candidate will be cross-examined and the problem will almost certainly become a major campaign issue. No trial date has been set for the suit, but Yahoo News reports it will be “moving forward” soon.

Rubio isn’t the only one hammering the issue. Texas senator Ted Cruz, third in the polls behind Rubio and Trump, has been bringing it up more as of late, telling an audience in Houston, Texas, “It’s a fraud case. I want you to think that if this man is the nominee, having the Republican nominee on the stand in court being cross-examined about whether he committed fraud: you don’t think the mainstream media won’t go crazy on that?”

The university was, of course, anything but. It existed mainly in the form of obscenely expensive real estate seminars, CDs and DVDs. It had no classes, teachers or buildings. The scam had to eventually change its name to the Trump Entrepreneur Initiative, after New York state education regulators objected to the use of the term "university." Gawker quoted New York State Attorney General Eric Schneiderman:

“No one, no matter how rich or famous they are, has a right to scam hardworking New Yorkers,” Schneiderman said in a statement. “Anyone who does should expect to be held accountable.” The attorney general said that Trump appeared in advertisements making “false promises” that persuaded more than 5,000 people around the country, including 600 New Yorkers, “to spend tens of thousands of dollars they couldn’t afford for lessons they never got.”

As ThinkProgress notes, Rubio doesn’t have much moral high ground on the issue, having written a letter to the U.S. Department of Education in 2014 asking for leniency for price-gouging for-profit Corinthian Colleges. But Trump’s case is certainly a step worse. His so-called university wasn’t just a sleazy marketing racket that sold a fraudulent product to the credulous masses; it was based on a Ponzi-like system of increased payment for rewards that almost never came to be — and all without even a degree to show for it.

Is this finally going to be the issue that chips into Trump’s populist image, and thus his lead? If the average voter knew Trump had made millions off the backs of the vulnerable, would he care? Thus far, Trump has been impervious to slandering veterans, Mexicans, Muslims, Fox News and every single major GOP figure. Perhaps his exploitation of the very entrepreneurial, aspirational class he is supposed to champion and embody will finally be his undoing.