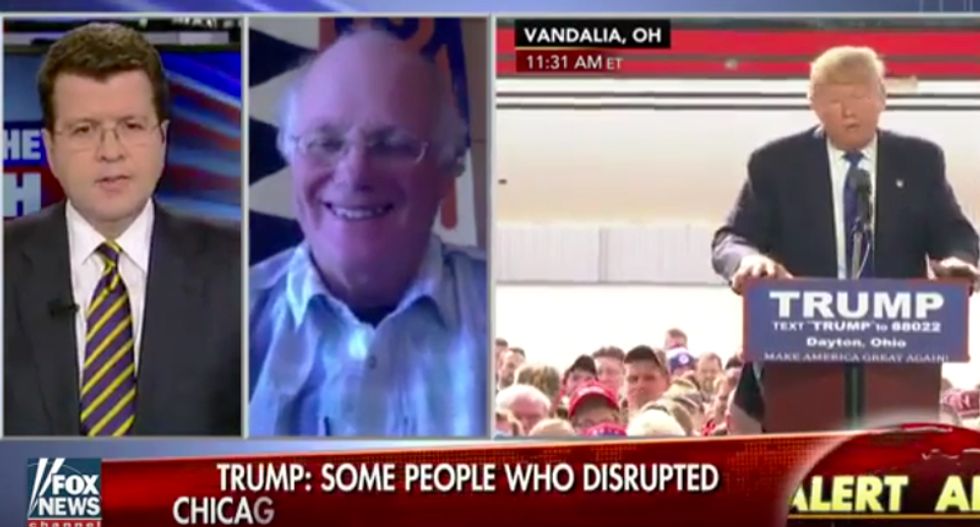 Appearing on Fox News with host Neil Cavuto, Ben & Jerry's founder Ben Cohen burst into laughter when the host tried to blame the protests that have roiled Donald Trump's rallies on the Bernie Sanders campaign.

Claiming that many of the protesters in Chicago were Bernie Sanders supporters, Cavuto asked, "What do you make of it that there were many Sanders protesters there?" before quickly adding, "That's what Donald Trump was saying."

"I got no idea who was there," Cohen said while shrugging and smiling. "But I can tell you that Donald Trump brings out a lot of strong feelings. And I believe a fairly significant majority of Americans do not agree with Donald Trump and are embarrassed by the way he is conducting himself and---."

"Well that's you opinion and you're entitled to it," Cavuto said cutting Cohen off.

Cavuto then equated the protesters at Trump rallies -- who have been assaulted before being hustled out by security -- with Black Lives Matter activists who interrupted speeches by Sanders.

With Cavuto insisting that protesters were being egged on by left wing groups, Cohen said, "You can't force somebody to come to some protest."

"These were not paid professionals, you know, going out there," Cohen laughed. "These are regular old people who are disgusted by what Trump is saying."