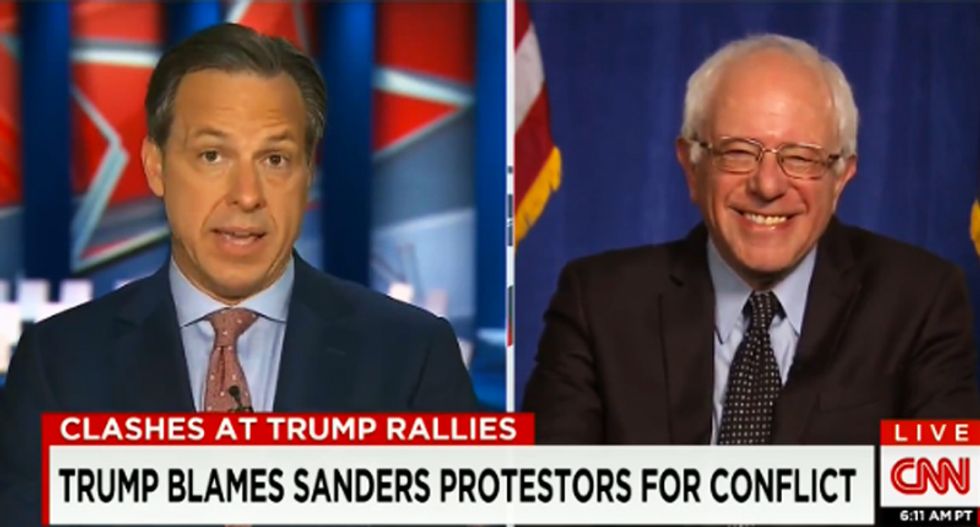 Democratic presidential candidate Bernie Sanders slapped back at rival Donald Trump on Sunday morning, calling the GOP front-runner "a man who cannot stop lying about anything."

Appearing on the CNN’s State of the Union with Jake Tapper, the discussion immediately turned to Trump blaming Sanders' supporters for disrupting his rallies and the New York billionaire calling the Vermont senator "our communist friend."

After initially laughing at Trump's accusations, Sanders proceeded to unload on the blustery businessman.

"For a start, we should take Mr. Trump's words with a grain of salt," Sanders began. "Because I think almost everybody knows, this man cannot stop lying about anything. To call me a communist is a lie. To talk about our organization, our campaign, disrupting his meeting is a lie,"

Sanders went on to state unequivocally that his campaign has nothing to do with the protests.

Sanders then enlisted comments made by Trump's GOP rivals to criticize him over the violence at his rallies.

"Even his Republican colleagues make this point," Sanders continued. "His language, his intonations, when you talk about carrying people out in stretchers, you see at his rallies people sucker-punched, folks kick people when they're down. This is a man who keeps implying violence, and then you end up getting what you see."

"I think that he, in fact, has got to tell his supporters that in the United States of America we don't go beating up people, that people have a right to peacefully protest, and I hope that becomes the tone of his campaign."