Bill Maher: Repubs won't care about climate change until Rubio is swept back to Cuba 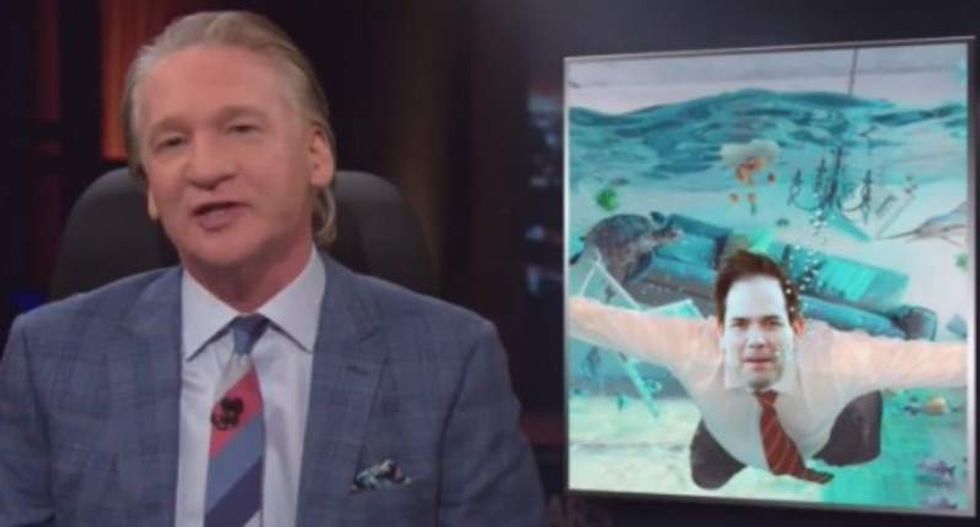 For Republicans to take climate change seriously, Bill Maher said on Friday's Real Time, they would have to be personally affected by it.

"Let Rush Limbaugh be attacked by a swarm of dying bees and the Koch brothers be swallowed up by a fracking-induced earthquake," he said. "And to slap the global warming denial out of Marco Rubio -- whose own state of Florida is one of the most likely places to be inundated by rising oceans -- his own home must get flooded and Marco must be swept out to sea and washed up all the way back to Cuba, where we will find out that Marco Rubio is really Elian Gonzalez."

The GOP's lack of empathy on that issue, Maher argued, runs throughout the party. As conservative as former Vice President Dick Cheney is, for example, he supports marriage equality because his own daughter is gay and "he needs to stay on her good side in case he needs a kidney."

"It explains why John McCain supports every form of war ever invented and some he just fantasizes about in the shower but torture? No. Because he was tortured -- by Sarah Palin," Maher said. "It explains why Ronald Reagan suddenly cared about AIDS only after it struck his friend Rock Hudson. And why Nancy Reagan got religion on stem cell research after Ronnie got Alzheimer's. And it explains why Newt Gingrich gave up hunting after he married an owl."

Which only makes Rubio and the other Republican presidential candidates look like hypocrites on the issue of immigration, Maher said.

"You can't spend the first half of a debate b*tching about how immigrants are ruining the country and the second half on the uplifting stories of your immigrant parents," he argued.