Bill O'Reilly rejects viewer complaints about Trump debate interview: I 'keep it all real and fair' 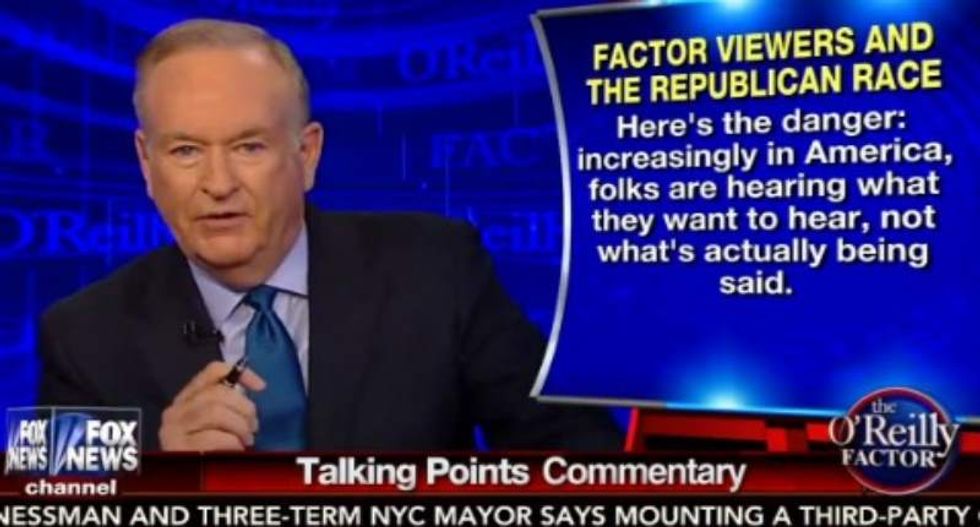 Fox News host Bill O'Reilly said on Monday that his viewers were lobbing conflicting accusations against him regarding his interview with GOP front-runner Donald Trump last week.

"Power can be a dangerous thing," O'Reilly said. "Americans should think long and hard before bestowing it on anyone. It is my job to keep it all real and fair. I believe I am doing my job."

The Factor host posted emails from viewers accusing both himself and his network of instigating a "hatchet job" against the Republican front-runner following the GOP candidate debate in Detroit. He also posted messages accusing him of taking it easy on Trump.

"It pains me to say it, but your fawning interview with Trump after the debate was cringe-worthy," one viewer wrote.

"I get opposite assessments every time I interview any politician," he responded, adding, "Here's the danger: increasingly in America, folks are hearing what they want to hear, not what's actually being said. We live in a time when you can create your own world by using high-tech gizmos."

O'Reilly did not mention criticism from viewers who wondered whether he was drunk during the broadcast, or former ABC News anchor Ted Koppel's statement that O'Reilly's on-air style had made interviewing Trump "irrelevant."

He did, however, highlight 9-year-old Max Suzich's complaint regarding the Republican candidates' language during the event.

"If I talked the way those men at the debate did, my mom would ground me," Suzich wrote.

"Politics is a rough business, Max, but I agree -- maybe some of them should be grounded," O'Reilly responded.

Watch O'Reilly's commentary, as aired on Monday, below.