Calif. deputies say they pummeled unarmed suspect with batons 'to gain his compliance' 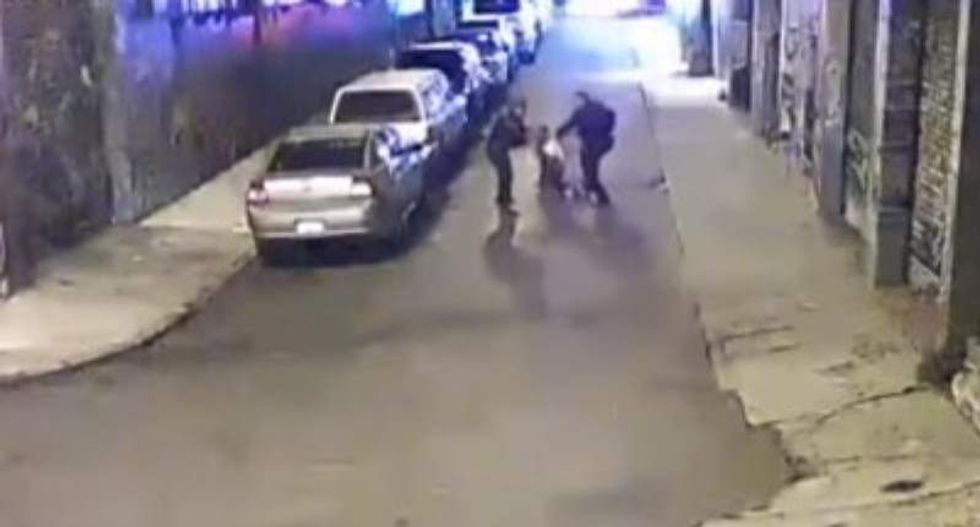 Two sheriff's deputies in Alameda County, California have come under criticism for their treatment of an unarmed car theft suspect caught on surveillance video, the San Francisco Chronicle reported.

The footage shows Luis Santamaria and Paul Wieber catch up to 29-year-old Stanislov Petrov on foot after Petrov allegedly stole a car, then crashed into a patrol vehicle early on Nov. 12, 2015. Petrov is seen running, then stopping as the deputies reach him, and is quickly tackled to the ground.

The deputies then begin battering him with their fists, then with their batons. Petrov was hit 31 times during the encounter, and was injured to the point where his attorney, Michael Haddad, said he will "never have full use of his hands again."

"Fearing that Petrov was going to assault Deputy Wieber, I removed my collapsible baton," Santamaria wrote in his report, which was only released following a public records request by the Center for Human Rights and Privacy. "I struck Petrov several times on his upper left arm to gain his compliance."

However, footage released on Thursday does not show Petrov actively resisting; instead, he is seen at various points trying to move away from the beating, or kneeling with his hands over his head. In each instance, however, the deputies continue hitting him as backup arrives. At least one deputy can also be seen kicking Petrov as he lies prone on the ground.

The surveillance footage is the only record of the incident because none of the 11 deputies present for Petrov's arrest had their body cameras turned on.

"The deputies' description of their encounter with Mr. Petrov does not match the surveillance video of the brutal beating released by my office," San Francisco Public Defender Jeff Adachi said in a statement to the Contra Costa Times.

Adachi also said the deputies' actions regarding their body cameras were disturbing.

"I do not believe that is a coincidence, but an attempt to cover up their misconduct," he said. "I urge the San Francisco District Attorney to file criminal charges against these officers."

A spokesperson for the sheriff's department, Sgt. Ray Kelly, said it was already reviewing its procedure regarding body cameras before the encounter with Petrov, and has since changed it to require officers to have their cameras on during interactions with the public.

Watch the incident, as posted online by Photography Is Not A Crime, below.