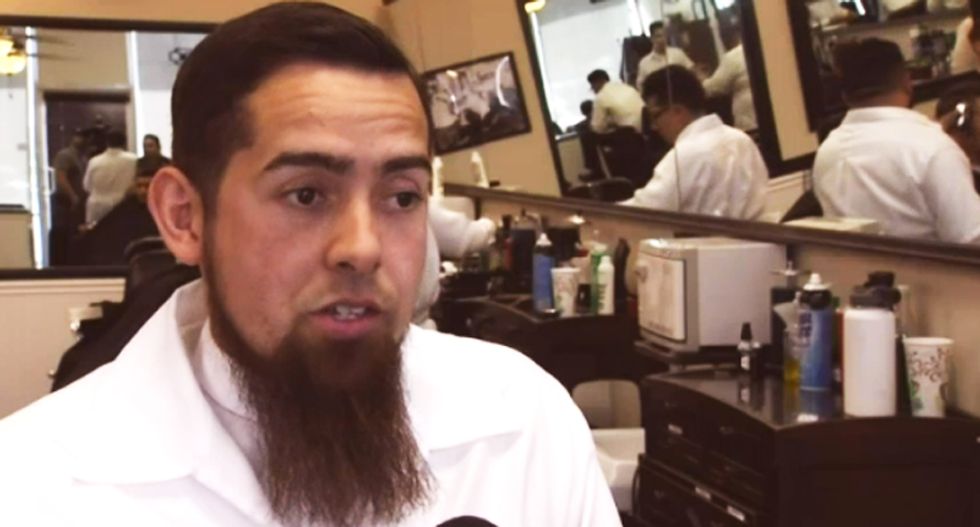 The owner of a California barber shop is facing scrutiny after turning away a transgender veteran on religious grounds while citing the Bible, reports the Advocate.

Kendall Oliver, who served in the Afghanistan, made an online appointment at The Barbershop in the Los Angeles suburb of Rancho Cucamonga but when he showed up to get his hair cut he was refused service by shop owner Richard Hernandez who said they only cut men's hair.

Oliver explained that he identifies as male, but was told, 'It doesn't matter ma'am, we still won't cut a woman's hair."

"I don't think that's how someone should be discriminated against, whether they identify as male or female or transgender," Oliver explained. "A person is a person."

According to shop owner Hernandez, he has nothing against the LGBT community, but he still refuses to cut women's hair.

“I have religious convictions that prevent me from cutting women’s hair,”  Hernandez told CBS-LA. "It's a shame for a man to have long hair, but if a woman has long hair, it's her glory and it speaks to being given to her as her covering, and I don't want to be one who is taking away from her glory."

According to Hernandez, he is a member of the Church of God and that his faith precludes him from cutting the hair of a woman, "even if they identify themselves as a man."

Despite the fact that it is illegal in California to discriminate based on gender, gender identity of gender expression, Hernandez feels the law is on his side.

“I value the Constitution we have in this country and I hope it upholds for me as well as others,” he explained.

Watch the video below via CBS-LA:

On Friday, People Magazine reported that Amy Duggar, the cousin of infamous former reality TV star turned convicted sex predator Josh Duggar, is publicly slamming her family for their efforts to secure leniency for him.

"This week, Josh's wife, Anna Duggar, and mother, Michelle Duggar, penned letters to a judge in support of the former 19 Kids and Counting star, 34," reported Dory Jackson. "Both letters requested Josh be returned home to his family 'in a timely manner' and urged the judge to consider his 'tender heart' and 'kindness to others' when determining his sentence."