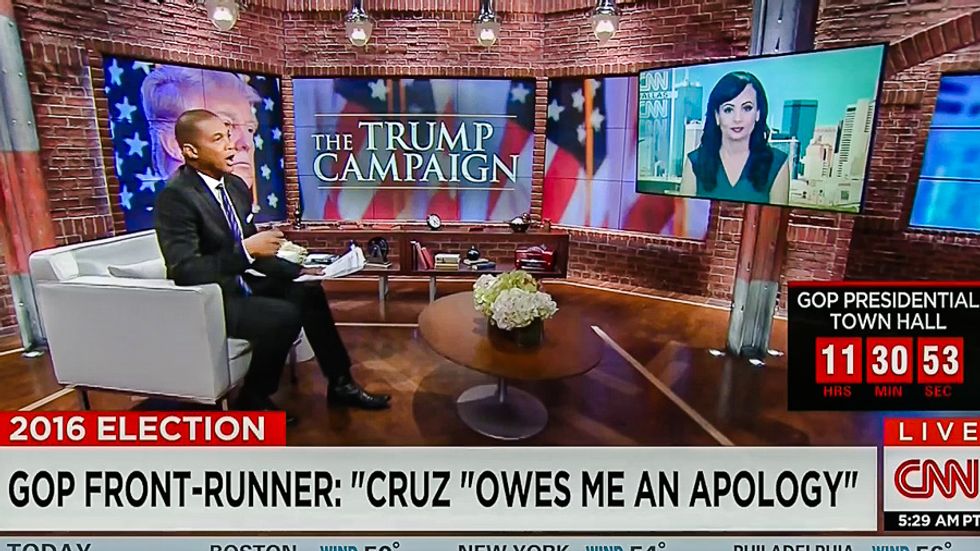 Donald Trump campaign spokesperson Katrina Pierson argued on Tuesday that Melania Trump was the only woman who had been attacked during the 2016 campaign -- even though Trump has gone after Ted Cruz's wife, Fox News host Megyn Kelly, GOP hopeful Carly Fiorina and Democratic candidate Hillary Clinton.

Following a week of sparring between the candidates about their wives, Pierson complained to CNN host Don Lemon over the network's "narrative" that Trump had attacked Cruz's wife.

Lemon reminded Pierson that Trump had promoted a tweet comparing an unflattering photo of Heidi Cruz to a glamorous photo of Melania Trump.

"You don't think that is an attack on a woman by using an unflattering picture?" Lemon asked. "Don't say that's supporting his wife because you don't need Heidi Cruz in that picture to support his wife."

"I can ask you the same question about Heidi Cruz," Lemon pressed. "Is it okay to malign Heidi Cruz, who is a beautiful woman, to attack her and put up a horrible picture?"

Lemon suggested that Pierson was "being very disingenuous about this."

"Is it an excuse beyond second or third grade to say that, 'Well he did it first, well they did it first'?" Lemon wondered. "Is that really an excuse?"

"Trump did not start this, but he will respond," Pierson said. "And to expect a man not to defend his wife in this case, I think is pretty insane. And the fact that he continues to support his wife and defend her in light of the fact that the media is making someone else the victim -- no, he shouldn't apologize until Ted Cruz does."

"I think it's a very good spin that you've put on it," Lemon concluded. "But not necessarily the truth."