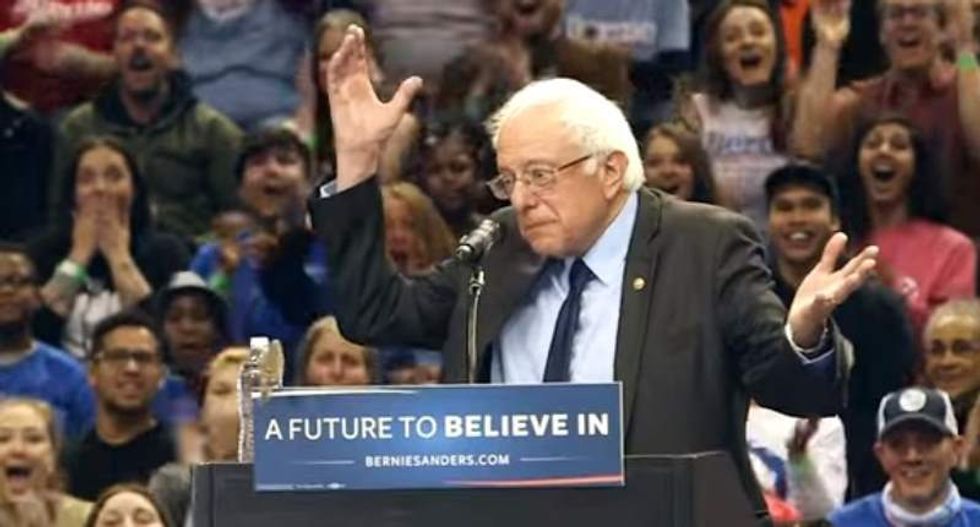 Sen. Bernie Sanders (I-VT) reacts after a bird flies up to his podium during a rally in Portland on March 25, 2016. (The Oregonian)

By Lauren Dake, The Guardian

In the city where TV show Portlandia popularized the phrase ‘put a bird on it’, one flew right up to the Democratic presidential candidate’s podium

A tiny bird interrupted presidential candidate Bernie Sanders’ rally in Portland, Oregon, on Friday afternoon, to the thunderous applause of the crowd.

Welcome to Portland, Senator Sanders, where the sketch comedy show Portlandia popularized the refrain “put a bird on it” as a way to parody the city’s hipster aesthetic.

The bird, breed unknown, alighted on the stage before flying up to the Democratic presidential hopeful’s podium. Sanders stood smiling and laughing at the little feller for a few seconds as the crowd cheered – whether it was for the bird or their candidate was not clear.

At one point Sanders shrugged his shoulders at Mr Bird as if to say, “Waddya know – you’re a hit.”

The bird, seemingly nonplussed by all the attention, did not stay long though, and after he flitted off, Sanders said: “I think there may be some symbolism here. I know it doesn’t look like it, but that bird is really a dove asking us world peace.”

The thousands who gathered to see Sanders speak in Portland on Friday followed similar large crowds that have turned out for Sanders’ rallies throughout the Pacific Northwest this week.

The senator is on a mission to capture delegates from his rival, Democratic frontrunner Hillary Clinton. This Saturday, Washington state will hold its caucuses, with 101 delegates at stake. Oregon’s primary is in May.

Sanders hit familiar themes during the Portland rally; he spoke of making college and universities tuition-free by taxing Wall Street speculation, and he mentioned taking on the fossil-fuel industry and raising the national minimum wage to $15.

“The truth is, if you work 40 hours a week, you should not be living in poverty,” he said.

He spoke of the Iraq war and noted Clinton’s vote in favor of the war.

Retired millworker Gary Johnston attended two Sanders rallies this week. He noted the Clinton campaign’s criticism of Sanders, calling him a single-issue candidate. But Johnston, 71, said the presidential hopeful’s commitment to his message is what the country needs right now.

“He’s what you might call anti flip-flop,” Johnston said of the presidential candidate.

Sanders closed the rally urging people to vote: “It is my hope and my belief both Washington and Oregon are prepared to help lead this country into a political revolution.”

The city’s famous Voodoo Doughnut shop had a large doughnut made in Sanders’ likeliness, presumably for him to enjoy after the rally.

Watch Sanders' encounter with the bird, as posted by The Oregonian on Friday, below.