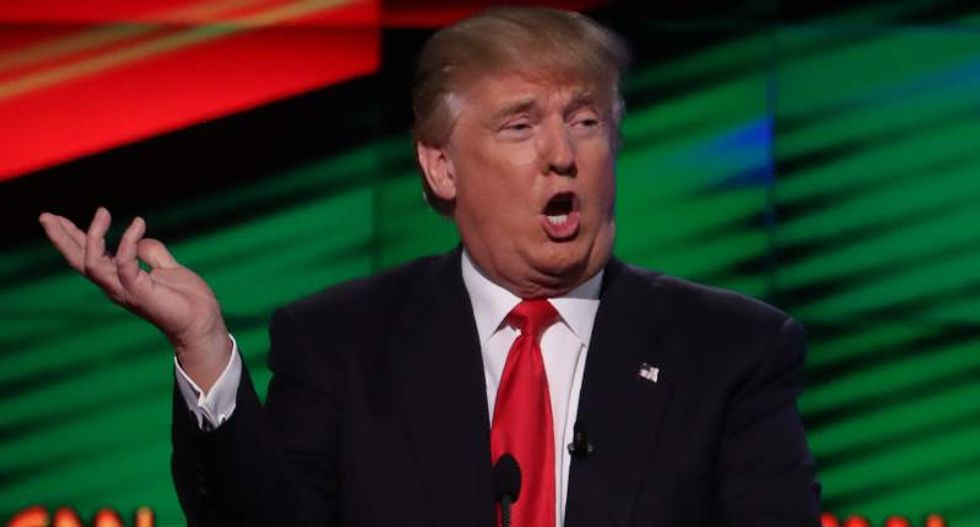 Republican presidential candidate Donald Trump speaks during the Republican candidates debate sponsored by CNN at the University of Miami in Miami, Florida, on March 10, 2016. (Reuters/Carlo Allegri)

A scheduled rally for Donald Trump's presidential campaign in Chicago on Friday was postponed.

A spokesperson for the GOP presidential front-runner cited safety concerns for the "tens of thousands gathered in and around" the University of Illinois-Chicago Pavillion.

The event drew thousands not only to the arena, but protests outside and inside the venue. A live stream from the scene captured Trump supporters blaming reporters for the cancellation; one woman could be heard yelling, "You should all be ashamed of yourselves."

Update, 9:19 p.m. EST: The activist group Voto Latino released a statement calling on demonstrators to also participate at the polls.

"The frustration felt tonight in Chicago has been felt by communities across the country. And while we should all work together and take a stand against hateful rhetoric, we must do that by rising and organizing," said the group's president, Maria Teresa Kumar. "We urge those protesting to channel this discontent to engage their communities, to encourage everyone to participate, register our families and friends to vote and together take a stand against hate."

Update, 9:50 p.m. EST: According to the Associated Press, Chicago police released a statement saying that they did not advise Trump to cancel the event, and that the department did not tell him there was a security threat at the arena.

Police spokesperson Anthony Guglielmi said the department felt it had enough officers at the scene to maintain order at the rally.

The progressive activist group MoveOn released a separate statement saying that Trump and Republican candidates supporting "hate-filled rhetoric should be on notice after tonight's events."

"To all of those who took to the streets of Chicago, we say thank you for standing up and saying enough is enough," said Ilya Sherman, the group's director of political action. "To Donald Trump, and the GOP, we say, welcome to the general election."

The live stream from the event can be seen here.

KXAS-TV is also airing a livestream, which can be seen here.