Donald Trump stage invader Tommy DiMassimo: 'I have to bully the bully' 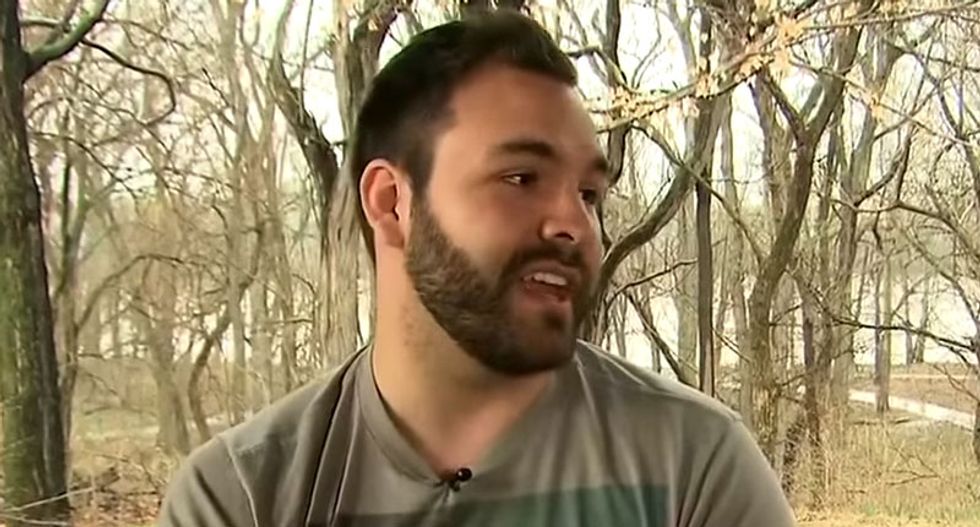 The man who rushed the stage at a Donald Trump rally in Ohio on Saturday has sought to explain his actions, telling the Guardian: “I have to bully the bully.”

Related: Donald Trump deflects blame from all sides after weekend of chaos

The man who briefly invaded Trump’s stage at Dayton airport was Tommy DiMassimo, a 22-year-old Wright State University senior with a history of protesting in support of liberal causes. The Republican presidential frontrunner turned from his lectern in surprise as secret service agents rushed to surround him. Others wrestled DiMassimo to the ground.

After the incident, which came a day after a postponed Chicago rally descended into violent chaos and shortly before police used pepper spray at an event in Kansas City, Trump claimed on Twitter that the protester had “ties to Isis”. Inevitably, his tweet – and subsequent refusal to disavow it – prompted a mini-media storm.

DiMassimo dismissed any link to the Islamic State and says he intended no harm, only to show that people are willing to stand up to Trump.

“I was going to take over the podium, make some remarks about Donald Trump and his followers and then get whisked away,” DiMassimo told the Guardian. “He holds power because he’s a bully. To delegitimize his power, I have to bully the bully.”

DiMassimo faces misdemeanor charges of disorderly conduct and inducing panic, and is now out on bail pending a further court appearance. He said he was not armed, dismissing social media chatter about a knife injury to a secret service agent.

Trump’s claim of an Isis link, DiMassimo said, was ludicrous.

“I participated in a demonstration last April at my college, and it was an anti-American flag demonstration in which I stood on a flag,” he said. “We released a video on YouTube called ‘ Not My Flag .’ Someone literally just took that video, removed all the audio and inserted some Isis fighting song in the background.”

The hoax video was taken down on Saturday. It was quickly reposted elsewhere . DiMassimo said he had received threats from Trump supporters.

“There are consequences that I hope to avoid but I’m prepared to accept,” he said. “If someone wants to kill me for having an idea, and the idea is ‘Donald Trump is full of shit’, then I feel bad for them.”

He adds: “I don’t think he cares to hurt me or not. I don’t think it matters to him. But he knows what it means to his base if he accuses an ‘Isis supporter’. Those are political points for him, because then he’s ‘fighting Isis’ on our soil.

DiMassimo said other recordings were made last year, in which he discussed the Islamic State, the militant group which controls territory in Iraq and Syria.

“I talk about Isis all the time because I deplore them,” he said. “They represent a conservative, religiously fundamental ideology that is more in tune with Trump and his supporters than with me. I’m a liberal. I in no way am politically on their spectrum at all. He’s closer to them than I am.”

DiMassimo has been protesting since the seventh grade, he said: “I was a white kid in a predominantly black middle school [in Atlanta]. My father was a history teacher who gave me Alex Haley’s Malcolm X biography. That’s how I came to understand race issues.”

Last year, he drew national attention while protesting at a rally held in support of the Confederate flag at Stone Mountain in Georgia. In the aftermath of the South Carolina church shooting, in which nine African American worshippers were killed by a white gunman, images of the protest went viral – including one in which a demonstrator with his hand on the butt of a pistol confronted DiMassimo at the top of the mountain.

The Black Lives Matter movement was represented among protesters at the postponed Trump rally in Chicago on Friday. As MSNBC host Rachel Maddow pointed out forcefully , recent Trump events have taken place in cities where African American men have been killed by police in cases that rose to national attention.

DiMassimo said he did not claim formal membership of any activist group, but “with Donald Trump, the issue is so vast, I feel like every American regardless of race – a phrase I rarely use – has a right to say, ‘No, you will not be my president.’

“He’s making white Americans either look insane and violent and ready to bomb the world … or just sort of privileged and neutral … and that doesn’t save you either. The only way to secure a safe future for myself as a white American is to stand up to white supremacists like Donald Trump.”

In a perfect world, DiMassimo said, “we would all sit down, and have a totally objective, rational, cerebral exchange where we just hash through the things that matter. In no way, shape or form is that going to happen with Donald Trump and his following. It’s just not going to happen.

“It’s insane. I don’t feel like I live in a sensible country any more that just has structural issues within its government. I really feel like I’m in some kind of Star Wars spin-off and Donald Trump is some kind of cheap, bad villain.”