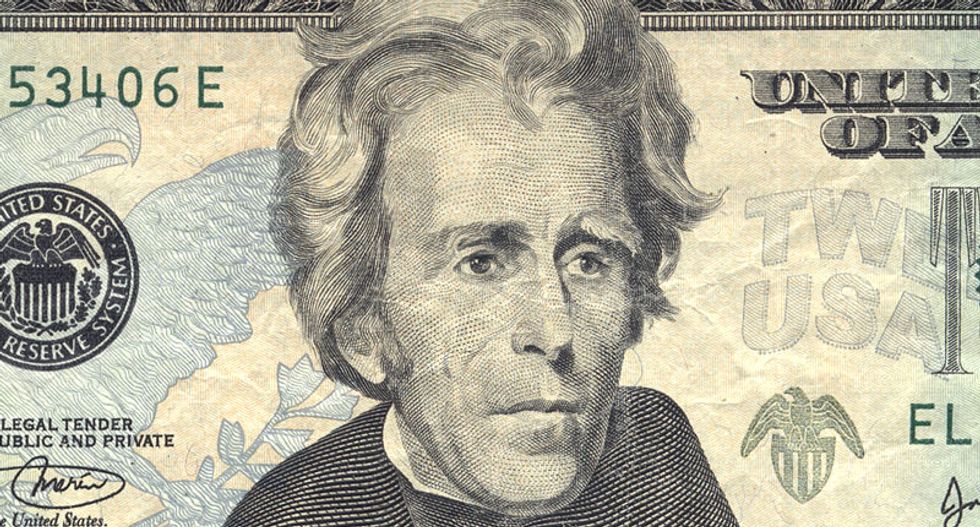 To the horror of the mainstream Republican Party, Donald Trump is the frontrunner for its nomination in the 2016 presidential contest. To listen to the panicked, baffled tone of the coverage, you might think that nothing like this had ever happened before. But that’s not quite the case.

Some more historically minded observers have noticed that Trump’s supposedly unprecedented march to the nomination bears more than a passing resemblance to the career of Andrew Jackson, the US’s seventh president (from 1829-37) and the controversial face of the $20 bill.

They’re on to something. Here are five reasons why:

#1: Look at the competition

Before he won the White House in 1829, Jackson had already run for president in 1824, at a time when US parties were changing. Until then, the system had consisted of two parties: the Federalists, mainly northeastern merchants and creditors who solidly supported the federal administration, and Democratic-Republicans, land-owning and farming southerners who claimed commitment to the common man.

In 1824, five Democratic-Republicans competed for the presidency against no Federalist candidate. Jackson received the most popular and electoral votes, but a majority of neither. Following Amendment XII, the House of Representatives decided the outcome, and John Quincy Adams became president.

Adams resembles Trump’s leading competitor, Hillary Clinton. The son of a former president, while she is a former first lady, Adams and Clinton are also both Ivy League-educated, both have served as US senator and secretary of state, and both represent the established political system of their time.

Jackson was born in the Carolinas. He was a self-taught lawyer who had become a national hero in the War of 1812, and was the first person from Tennessee elected to the House of Representatives. These are not qualities Donald Trump shares. But he does share one important attribute with Jackson: he represents an idea, rather than an ideology.

The House of Representatives' choice of Adams in 1824, which Jackson’s supporters dubbed the “corrupt bargain”, came to represent the elite’s subversion of the will of the people. Jackson rose to the presidency in 1828 by deriding those same elites, just as Trump rails against Washington today.

Historian Walter R Mead tells us that Jackson represented a “set of beliefs and emotions”. At the heart of his worldview was the notion that the federal government held ultimate power and authority, and should do everything possible to protect and promote community well-being. Trump, although running for the Republican nomination, also advocates a strong central government, emphasising its role in physical and economic security – and casting himself as the protector of the ordinary man.

Additionally, Jacksonians believed the US should not seek out wars, but if called into a war, must achieve “unconditional surrender and total victory”. When Trump states that he would “bomb the shit out of ISIS”, he plays upon the same insecurity, nationalism and patriotism Andrew Jackson tapped into.

#3: Appeal to the common man

Trump and Jackson both appeal to the instincts of voters outside the political establishment. Despite being rich and powerful himself, Andrew Jackson railed against the rich and powerful, just as Trump criticises Wall Street bankers despite being a member of the Forbes 400. As with Jackson, the contradiction does not affect his appeal.

Trump supporters, most prevalent in America’s heartland, believe the trend of political correctness has gone too far and that pressure from coastal intellectuals is subverting their own thoughts. Trump reinforces this by denigrating political correctness and praising his own supporters, who are so loyal, he maintains, that he could “stand in the middle of Fifth Avenue and shoot somebody and wouldn’t lose voters”.

They are reminiscent of Jackson’s voting base: inland voters who appreciated his “tell it like it is” personality and disdain for social niceties. Jackson was quoted as saying that he wished he had shot his chief political rival and hanged his vice president, and still retained overwhelming popular support.

#4: Offence to the establishment

Comments such as these offend the political establishment. Jackson alarmed Thomas Jefferson, who called him unfit, disrespectful, filled with rage, and dangerous. Subsequently, Jackson condemned political leaders as “demagogues”, and filled his cabinet with business-people who had no public service experience.

Donald Trump has a similar relationship with current Republican leadership – they find him dangerous, and “unelectable”. Polls report the general opinion that Trump would be an embarrassment as president – yet he still has a steadfast and growing pool of supporters.

Just like Jackson, Trump appeals principally to whites. The progress and security he champions are the progress and security of white people. He has declined to disavow the Ku Klux Klan, claimed Mexican immigrants bring drugs, crime, and rape into the US, and called his fans “passionate” when he hears they beat a homeless Hispanic man. He told a room of Jewish Republicans they understand him because he’s a negotiator like they are, re-tweeted white supremacists’ compliments – and all the while, maintains he’s “the least racist person you have ever met”.

Trump’s defence is understandable, because his is a special kind of racism. He doesn’t exactly hate African-Americans, latinos, or other non-whites; like Jackson, he simply doesn’t respect their rights. Minorities can live their lives as long as they don’t threaten the security of the white majority.

There may be no president in history that represents this notion better than Jackson, who signed the Indian Removal Act and announced with “pleasure” the “benevolent policy of the government” to resettle “Indians” far from white settlements.

These tribes were not threats in themselves, but were seen as a threat to white prosperity and security. Jackson thus ordered a forced removal of tribes to regions west of the Mississippi River, during which an estimated 4000 Cherokee and 3500 Creeks died. These events are collectively known as the Trail of Tears.

Some regard Jackson to be the father of the Democratic Party, which emerged during the political turmoil of his presidency. His treatment in 1824 galvanised his supporters, and propelled him to election in 1828 and re-election in 1832. When his vice-president, Martin Van Buren, was elected to succeed him, it was clear the Democrats and their common man appeal had staying power.

Whether Donald Trump will usher in a new era of American political development remains to be seen. There has been talk of changing nominating rules or negotiating the convention if Trump wins the most primary votes, something he remains on track to achieve. Trump could be denied a nomination he would have won according to the rules under which he entered the race. If it comes to that, Republicans should recall the events of 1824-1828 and ask themselves what they have to look forward to in 2020.