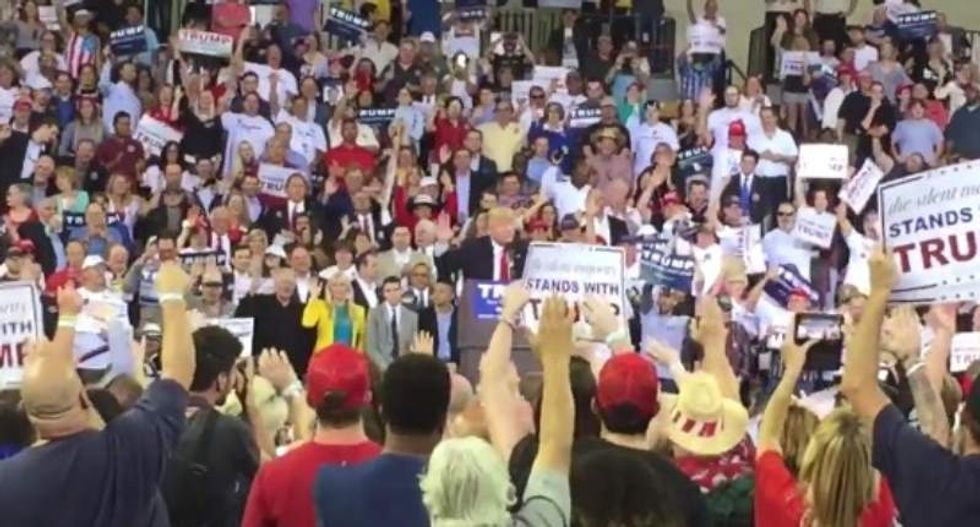 A Holocaust survivor and longtime watchdog of right-wing extremist groups said Donald Trump is playing a dangerous game by leading followers in a Nazi-style pledge.

Abraham Foxman, the former director of the Anti-Defamation League, harshly criticized the Republican presidential candidate for asking supporters to raise their right hands in salute and promise to vote for him in the Florida primary election, reported the Times of Israel.

“As a Jew who survived the Holocaust, to see an audience of thousands of people raising their hands in what looks like the ‘Heil Hitler’ salute is about as offensive, obnoxious and disgusting as anything I thought I would ever witness in the United States of America,” said Foxman, who was born in Poland in 1940 and was saved from the Nazis by his Catholic nanny.

He told the newspaper that the gesture's symbolism was obvious and troubling.

“It is a fascist gesture,” Foxman said. “He is smart enough — he always tells us how smart he is — to know the images that this evokes. Instead of asking his audience to pledge allegiance to the United States of America, which in itself would be a little bizarre, he’s asking them to swear allegiance to him.”

The Nazi Party adopted the stiff-armed salute to signal obedience to leader Adolph Hitler, and it's still used today by right-wing extremists.

“We’ve seen this sort of thing at rallies of neo-Nazis. We’ve seen it at rallies of white supremacists. But to see it at a rally for a legitimate candidate for the presidency of the United States is outrageous,” Foxman said.

Trump also warned supporters who took the pledge that "bad things" would happen to them if they broke their sworn pledge to vote for him -- and Foxman was particularly disturbed by that.

“This is so over the top for a man who really doesn’t come out of the underground," Foxman said. "He is a man of the world. Even though he proclaims he doesn’t know who David Duke was, or the other white supremacists, we know very well that he knows. So he’s playing to an image.”

Trump continues to lead the GOP presidential field despite -- or possibly because of -- a steady stream of outrageous and controversial remarks, and Foxman warned that this might have dangerously emboldened the real estate tycoon and reality TV star.

"I think he was intoxicated with all the things that he’s already got away with, and it led him to this,” Foxman said. “This is the summit of his own intoxication with what he perceives as his leadership quality.”

Trump's underlying message of violence is “increasingly appealing" to his supporters, Foxman said, and threatens to “break all the taboos of civil behavior."

“When he said, ‘I can walk down the street on Fifth Avenue and kill somebody and my supporters will not desert me,’ he knows exactly what buttons he’s pushing," Foxman said. "Or when that guy interrupted his speech. People in that situation may think internally, ‘Oh, I want to punch him in the mouth.’ But you don’t say it, you don’t say it, because it’s not civilized. But he said it and it was applauded."

Foxman, who led the ADL from 1987 until his retirement last year, said Saturday's rally was an unprecedented moment in American political history.

“You can find some authoritarian, semi-fascist tinges in Southern politics during the segregationist era,” he said. “But there’s never been anything like this, and nothing on this scale."