Inside the pages of the oldest comic in the world 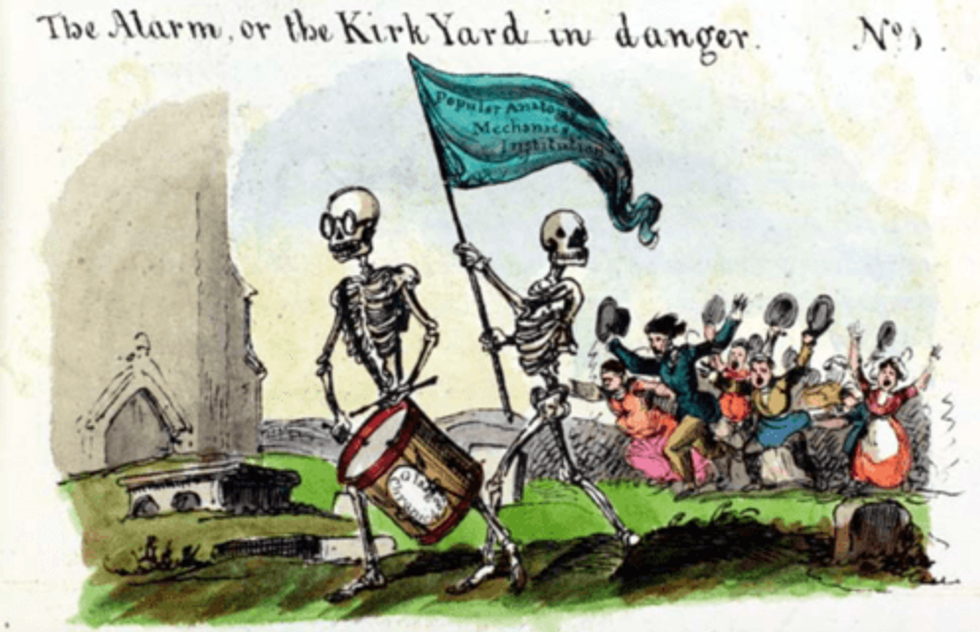 Here’s a good pub quiz question: what was the world’s first comic?

If you’ve no idea, don’t feel too foolish. It wasn’t even recognised by experts until a few years ago and is still debatable today. But long before Viz, The Beano, Eagle and even Punch, I can answer with reasonable confidence that the accolade goes to the Glasgow Looking Glass of 1825.

The fortnightly publication, which ran over 19 issues for a year starting in June 1825, offered a satirical view of politics and all aspects of life in the city – before broadening to become the Northern Looking Glass from issue six. The cover of the first issue includes a panoramic cartoon that pokes fun at the world powers of the day, including images of John Bull (personifying England) alongside the likes of the King of Prussia and Charles X of France. Next to this is a cartoon entitled “Fashions for June”, which mocks the excessive styles that people were wearing.

The comic was the brainchild of the English satirical cartoonist William Heath, who had reached Glasgow after fleeing from London to escape debts. Often published under the nom de plume Paul Pry, Heath teamed up with lithographic printer Thomas Hopkirk and his print manager John Watson to produce the publication after meeting Hopkirk in one of the city’s drinking dens.

The Looking Glass contained the world’s first comic strip, namely the History of a Coat, whose adventures from owner to owner ran over three episodes. There were many examples of speech bubbles, such as the heated one below between “Billy the Bully and Ranting Dan”.

Billy the Bully and Ranting Dan.

Well before the environmental movement as we know it was a cartoon entitled: “The Consumption of Smoke”, which gives a futuristic before-and-after imagining of city life without factory smoke. Also eye-catching is the hard-hitting cartoon in the lead image that accompanied an essay on the problem of grave robbing; and the one below that depicts English banks crumbling around a fat John Bull next to thrifty Scotsmen – ironic after the banking crisis in our era.

The Looking Glass was a soaring success, sharply increasing the number of outlets in the first few issues both across the Scottish central belt as well as to Liverpool and London. Its undoing seems to have been its celebrity, with its biting satire making enemies for Heath, who fled back to London at the height of its popularity. He was said to have run up drinking debts. He started a London version of the title but it folded after a few months.

Despite being a trailblazer, the Looking Glass’s claim to be the world’s first comic was overlooked by virtually all historians of the graphic novel until the end of the 20th century. The main previous contender was the Histoire de M. Jabot, which was launched in 1835 by Geneva schoolmaster Rodolphe Töpffer. Jabot tells the story of its central character’s search for love. The tone is burlesque and caricatural, with humour often provoked by the discordance between the pseudo-lofty tone of the text and the slapstick nature of the accompanying images.

Although only intended for Töpffer’s pupils and close friends, the cartoons were popular enough to engender numerous pirate versions and spin-offs. This included North America’s first comic, The Adventures of Mr. Obadiah Oldbuck of 1842 – a year after Punch arrived in the UK.

When I said at the beginning that the Looking Glass’s status as the first comic was debatable, it means ignoring previous examples of narrative heroes like Rowlandson or Hogarth; the speech bubbles used by Isaac Cruikshank and Biblia pauparum; and before-and-afters like the manuscript of Petrarch’s Visions. Depending on how you define “comic”, any of these might be able to stake a claim.

But judging from our 21st-century viewpoint, where we see a comic as something to fold up and take home – something featuring picture stories and available to a mass market – it is hard to argue against the Looking Glass. Jabot is perhaps the world’s first modern graphic novel, though it was not available to the masses of course.

Whatever your point of view, we’re running a four-month exhibition in Glasgow that contains examples of everything I have mentioned – as well as the first copy of Punch and various other artefacts dating as far back as Ancient Egypt. Thanks to a loan from the Kunzle Collection of Los Angeles, we’ll also be able to show the first editions of Oldbuck and Jabot and the original Jabot manuscript side by side for the first time ever.

Töpffer felt that his comics were not worthy of serious attention, let alone academic analysis or gallery displays. This was the way that most people viewed comics until the end of the 20th century. Thankfully the world has now seen the light. Publications like these give us a unique view of society in the early 19th century, and are invaluable in helping us understand how the modern comic came about. Long after the laughing has stopped, they continue to be incredibly important.