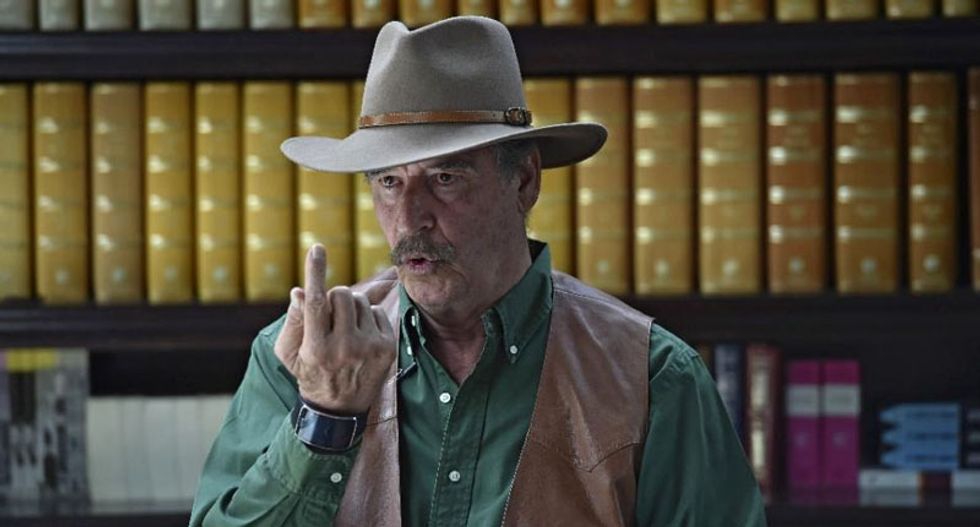 With an F-bomb against Donald Trump that made global headlines, Mexico's former president Vicente Fox expressed the anger felt by his compatriots against the equally potty-mouthed White House hopeful.

While Fox has had choice words for the Republican front-runner, the two men actually share some things in common.

They are both grandsons of immigrants. They are both successful businessmen -- one a former Coca-Cola executive in Mexico, the other a New York real estate mogul. And they both tapped discontent among voters to challenge the political establishment in their countries.

He then looked at the AFP camera and pleaded, in English: "Wake up, America, from this nightmare!"

But it was an F-word heard around the world that got attention last month, when Fox, furious about Trump's vow to make Mexico foot the bill for a huge border barrier, told the US channel Fusion that he would not pay for Trump's "fucking wall."

Trump, who has not been shy about using expletives during the campaign, expressed shock on Twitter and demanded an apology from Fox, who was president from 2000 to 2006.

President Enrique Pena Nieto chimed in this week, telling the newspaper Excelsior that Trump's "strident tone" was reminiscent of the rhetoric that led to the rise of Hitler and Mussolini.

But it was the 73-year-old former president's expletive that resonated in Mexico, where people have designed T-shirts with insults against Trump or created pinatas of his likeness.

"Don't make me talk about Trump," Fox quipped to AFP journalists as he showed up at the interview wearing a cowboy hat in his Fox Center think tank, which shares space at his country estate where he also raises cattle.

But he takes a possible Trump presidency seriously.

"We have to act now, not wait until he is sitting in the president's chair," said Fox, who ended 71 years of uninterrupted rule by Pena Nieto's Institutional Revolutionary Party in 2000.

Fox is the descendant of an Irish family that migrated to the United States. His grandfather, who was born in the US state of Ohio, ended up seeking his fortune in Mexico.

Trump's grandfather, meanwhile, immigrated to the United States from Germany.

This is why Fox has a hard time understanding why Trump, 69, has taken a harsh stance on immigration -- calling Mexican migrants rapists and drug traffickers -- when he has migrant roots.

"A discriminator who thinks that the white race is the supreme race makes me think of Hitler. ... He initially made proposals in a democratic environment, but once he was in power he turned into a dictator, like Hugo Chavez," Fox said, referring to the late socialist Venezuelan leader.

The former Mexican leader, who himself drew controversy in 2002 when he said that Mexicans in the United States did the "jobs that not even the blacks want to do," got really riled up when discussing Trump's plan to deport millions of undocumented migrants.

"That damn guy, let's see if we don't start with (deporting) him first," he said.

Fox is also disappointed with Trump's top Republican rivals, senators Ted Cruz and Marco Rubio, who are both sons of Cuban migrants but also have called for mass deportations.

"God save us from them because the Republicans weren't like that before. ... Ted Cruz and Marco Rubio reject their own roots," he said.

"They can put up a big wall, they can abuse us. We are small here but we are spicy, like chili peppers. We, Mexicans, don't let anyone offend us," Fox said.

While Trump is favored to win the Republican nomination, Fox has his own prediction: "This character will die politically for being a liar, for being a false prophet."