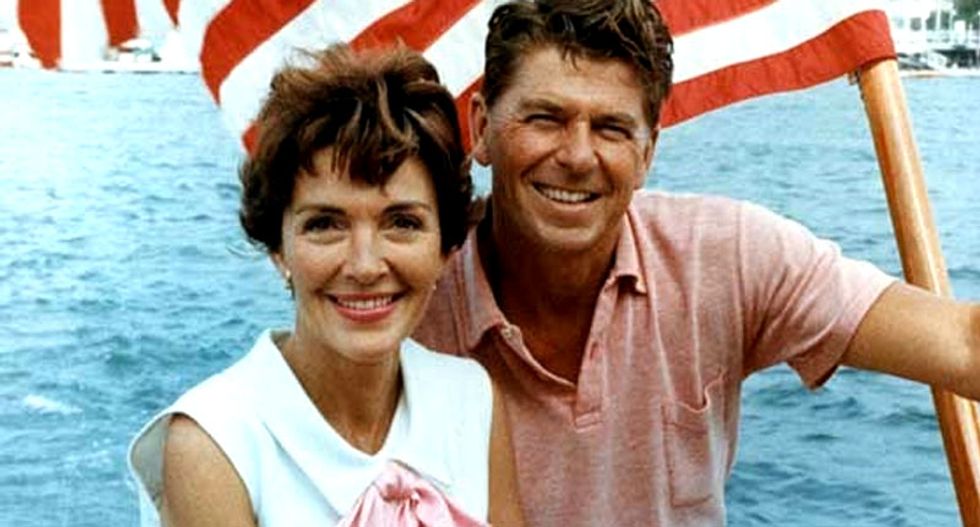 Ronald Reagan and Nancy Reagan aboard a boat in California, 1964 (Wikimedia Commons)

Funeral services for the former Hollywood actress and first lady capped two days during which thousands of mourners filed past her flower-bedecked casket at the Ronald Reagan Presidential Library in Simi Valley, north of Los Angeles.

She is to be buried beside her husband in a private grave side service on Friday evening, following a 90-minute televised ceremony. Dignitaries expected to attend the service include former first lady and now Democratic front-runner in the 2016 presidential race Hillary Clinton, and celebrities Frank Sinatra's daughter, Tina, and Oscar-winning actress Anjelica Huston.

The service brought together Republicans and Democrats alike to pay final respects for a woman especially admired by political conservatives at a time when deep partisan rancor has reverberated through Washington and the 2016 presidential campaign.

Organizers said 950 guests in all were expected for the invitation-only memorial, held inside a large white tent on the south lawn of the library, and they began arriving by shuttle bus at 8 a.m. PST (1600 GMT) under sunny skies and light clouds.

Always fiercely protective of her husband, Nancy Reagan was regarded as one of the most influential presidential spouses in U.S. history during his Republican administration from 1981 to 1989.

She died on Sunday of congestive heart failure at age 94. Ronald Reagan died in 2004 after a long struggle with Alzheimer's disease, the progressive brain disorder that destroys memory. He was 93.

"They truly loved each other," Edwin Meese, the longtime Reagan aide who served as attorney general in his Cabinet, told reporters. "Her life really was devoted to encouraging and supporting him, and that carried on even after he went into total seclusion and even when he was no longer capable of really sometimes even responding to that love."

Biographer Craig Shirley recalled that Nancy Reagan also played a direct role at times in the political affairs of her husband, such as having a hand in the firing of campaign manager John Sears in 1980 and the dismissal of chief of staff Donald Regan in 1987.

The funeral was scheduled to begin at 11 a.m. PST with music performed by a choir from the nearby Santa Susana High School and a U.S. Marine Corps band.

Leading the roster of VIP mourners slated to attend is Michelle Obama, joined by close relatives of all of President Barack Obama's nine immediate predecessors, including former President George W. Bush and his wife, Laura.

The list of those expected to attend the service include Jimmy Carter's wife, Rosalynn, Caroline Kennedy, daughter of the late President John Kennedy, children of Lyndon Johnson, Richard Nixon and Gerald Ford.

Others expected include television news veterans Katie Couric, Sam Donaldson and Diane Sawyer, as well as such showbiz figures as Anjelica Huston, Wayne Newton, Gary Sinise and Mr. T, who was a supporter of Nancy Reagan's anti-drug campaign.