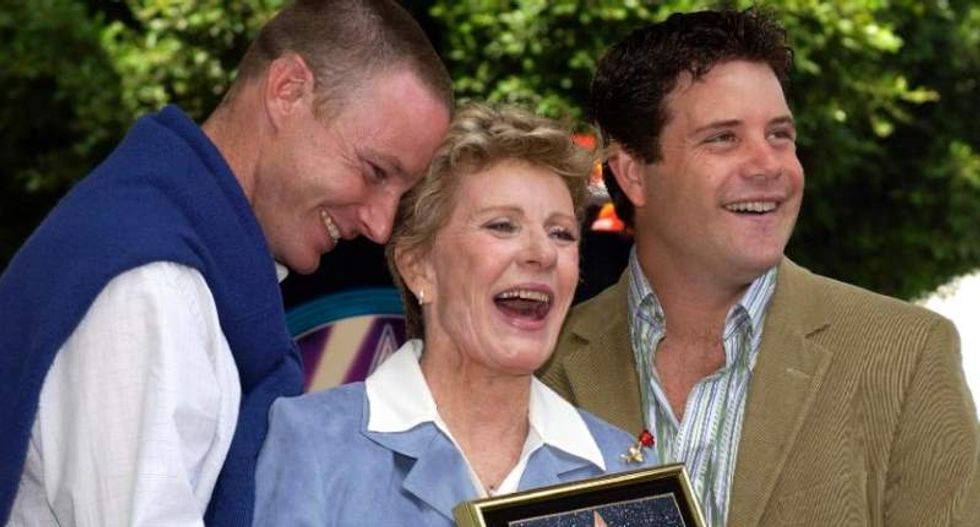 Actress Patty Duke (C) and sons MacKenzie (L) and Sean Astin attend the ceremony honoring her with a star on the Hollywood Walk of Fame on Aug. 17, 2004. (AFP/Vince Bucci)

Actress and singer Patty Duke, who won an Oscar at age 16 for her portrayal of deaf-blind political activist Helen Keller in "The Miracle Worker," died Tuesday. She was 69.

Duke, whose real name was Anna Pearce, had developed sepsis from a ruptured intestine, her manager Mitchell Stubbs said in a statement.

"This morning, our beloved wife, mother, grandmother, matriarch and the exquisite artist, humanitarian, and champion for mental health Anna Patty Duke Pearce closed her eyes, quieted her pain and ascended to a beautiful place," said her son, the actor and director Sean Astin.

Astin, who played hobbit Samwise Gamgee in Peter Jackson's "The Lord of the Rings" trilogy, said the family were celebrating the "infinite love and compassion she shared through her work and throughout her life."

Duke, who lived in New York, shot to fame with a best supporting actress Academy Award for her role as Keller in Arthur Penn's 1962 biopic "The Miracle Worker."

She built on her success by playing "identical cousins" in her own sitcom, "The Patty Duke Show," which ran for more than 100 episodes in the mid-1960s.

She went on to take film roles, including in Mark Robson's 1967 drama "Valley of the Dolls," embarked on a successful singing career and served as president of the Screen Actors Guild from 1985 to 1988.

She won three Emmy Awards, including for the miniseries "Captains and Kings" and television movie "My Sweet Charlie," which both aired in the 1970s.

In her 1987 autobiography, she revealed that she had been diagnosed with bipolar disorder, then known as manic depression, five years earlier, and she went on to become a vocal advocate for people with mental health issues.

Duke apologized to fans earlier in March for having kept a low profile recently.

"I have been absent, but not far, believe me. I love and miss you all. Hopefully back more soon and often," tweeted the star, who celebrated 30 years of marriage to her fourth husband, drill sergeant Mike Pearce, two weeks ago.

"First on Broadway and then on the silver screen, Patty Duke's characterization of the extraordinary development of the blind-deaf child brought global attention to the plight of people living with those challenges."

Astin said Duke had talked about setting up a "Patty Duke Mental Health Initiative" as she struggled with illness.

Her death triggered an outpouring of tributes from Hollywood, led by the Academy of Motion Picture Arts and Sciences which posted a picture of Duke as a grinning teen, proudly brandishing her Oscar.

West Wing star Marlee Matlin, who won a best actress Oscar for "Children of a Lesser God," described Duke as "brave, outspoken and humanitarian" while "Star Trek" and "TJ Hooker" actor William Shatner said she was "a wonderful friend."

"She was so cool she had a disco dance named after her in my hood in 70s NYC," said legendary New York musician and producer Nile Rodgers.

Flowers were being readied to be placed on Duke's Walk of Fame star on Hollywood Boulevard.