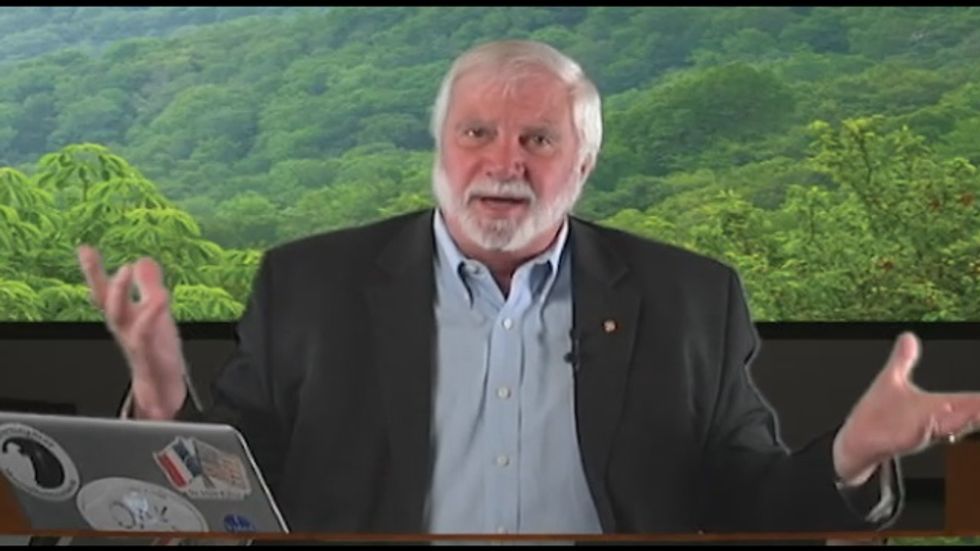 A right-wing pastor who prayed for the military takeover of President Barack Obama's administration said "mature" Christians should vote for Donald Trump -- even if they think he's the antichrist.

Rick Joyner drew strong praise from Sarah Palin for promoting what she describes as the "golden wrecking ball" theory of Trump support among conservative Christians who suspect the Republican frontrunner may be the biblically foretold harbinger of apocalypse.

"Most seem to think that Trump is either a messenger from the Messiah or from the antichrist, and few are in-between," Joyner said. "Some Christians are shocked that other Christians would vote for Trump, yet polls indicate that more than half of evangelical Christians are voting for him. Why?"

Joyner said many Christians were backing Trump because they realize they've been conned for decades by Republicans who claim to share their beliefs but are unwilling or unable to pass their rigidly conservative agenda through the U.S. Congress.

He said those Christians "think that they have heard from God about Trump," and Joyner said "the extreme opposition to Trump from all of the bad guys proves he’s God’s choice."

They see Trump's outrageous behavior as a sign that he "will resist political pressure and do what is right for the country, instead of for special interests" -- a category presumably excludes evangelical Christians.

Joyner admits that many evangelical Christians have grave concerns about Trump's character, morality, sincerity and understanding of the issues they care about most -- such as abortion and constitutional legal theories -- as well the possibility that the real estate tycoon and reality TV star could be Beelzebub, Lord of the Flies.

"Although I can appreciate why any Christian would have trouble supporting Trump, it is encouraging that so many sincere and mature Christians would support him in spite of the negatives," Joyner said. "How many of us would have chosen the ones Jesus picked to be His leaders? Why didn’t He go to the religious conservatives to find the future leaders of His church? Like it or not, the ones He chose were more like Trump than those we tend to esteem."

"Even the Apostle John, who is now known as the great messenger of love, was so reactionary that he wanted to call down fire from heaven to consume those who disagreed with them," Joyner said. "On the night before Jesus was crucified, the disciples argued over who was the greatest. Sounds like Trump to me."

Joyner has previously compared Trump to Jesus -- who he said was an intimidating "tough character" whose own apostles were terrified to question.

"Even if you don’t like many of the things Trump says, the sense that he will fight back, and fight hard, is more appealing to Republicans now than the empty rhetoric and promises of those who claim to be conservatives but did not act like it," Joyner said. "The establishment made Trump inevitable. The more the establishment tries to stop him, the more inevitable he will be."

That's why he proposed a Trump-Cruz ticket, with other GOP presidential candidates rounding out the cabinet to vanquish foes both foreign and domestic.

"Many Christians voted for Jimmy Carter because of his boldness about his faith, but how did that work out?" Joyner said. "I’m not saying that Trump is another Reagan, but almost all of the things now said about Trump were said about Reagan. Like Trump, Reagan seemed to be a nominal Christian when elected, but it turned out pretty good."

"Even so, I admit that Trump is still a challenge," he continued. "I can see sound biblical reasons for supporting him and for not supporting him. I think this is a good thing. It forces many to examine their convictions about many important things, which can only strengthen us if we refuse to let it divide us."