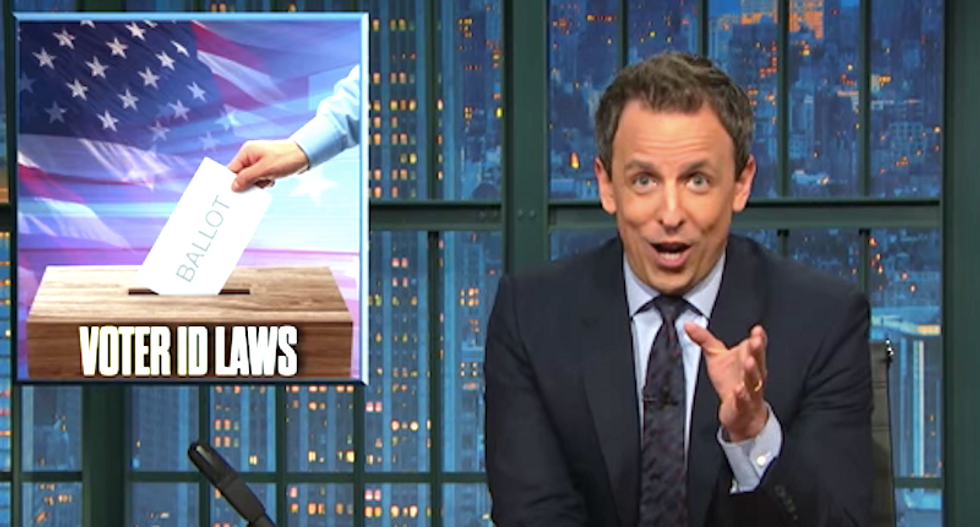 Voting levels in the U.S. are already among the lowest in the industrialized world, with just 53.6 percent -- compared to turnout well above 80 percent in Belgium, Turkey and Sweden.

"And in Sweden, you have to put the voting booth together yourself," Meyers joked, flashing a mock ad for an Ikea voting booth.

Since the 2010 election, lawmakers in 21 states have passed laws making it harder to vote, and 15 of those states will have them in place for the first time ahead of this year's election.

A new voter ID law in North Carolina is expected to block as many as 218,000 registered voters from casting ballots in November.

"That's a huge deal," Meyers said. "In 2008, Barack Obama won North Carolina by just over 14,000 votes -- (so) 218,000 votes could literally be the difference between President Hillary Clinton and Glorious Beloved Leader Donald Trump. All praise to him and his magnificent hands."

He pointed out a 94-year-old North Carolina woman who made 10 trips to the DMV and spent more than 20 hours trying to obtain one of the required forms of ID.

"If you want to know what 10 trips to the DMV does to a person, just look at the people who work there," Meyers said. "And 94-year-olds are not committing voter fraud. Old people don't pull scams -- they get scammed. Ninety-four is a terrible age to start a long con. 'First, I'll get a Democrat elected, and then -- oh, I died.'"

Meyers said even the lawmakers passing these measures realize there is no real evidence of voter impersonation fraud -- which the laws are intended to prevent.

"Don't prescribe a solution to a problem that you aren't even sure exists," Meyers said. "That's like saying, 'We're not sure you're going to be on The Bachelor, but you should start taking Valtrex anyway.' Or shaving your cat just in case it has fleas."

A 2014 study found only 31 credible cases of voter impersonation fraud since 2000 out of more than 1 billion ballots case.

"The overreaction to this nonexistent problem has been so insane," Meyers said, that one 86-year-old woman who has been voting since the Eisenhower era could not obtain proper ID despite presenting her expired New Hampshire driver's license, two different birth certificates, a Social Security card, a Medicare card and her apartment lease because the name on her birth certificate did not match the name on her current documents due to her marriage in 1950.

"I guess Reba should have listened to her mother when she said, 'If you marry that Bowser boy, you're going to regret it one day,'" Meyers joked.

Republican lawmakers in Alabama passed a voter ID law making it illegal to vote without a government-issued ID -- and then promptly closed down most of the offices where residents could obtain those documents.

Alabama's secretary of state promised to make up for the closures by sending mobile units to those counties, but he admitted only 29 IDs had been issued last year.

He said the new laws had the potential to disenfranchise millions of voters this year.

"We shouldn't be making it more difficult for people to vote -- especially old people who had to fight for that right in the first place," Meyers said.