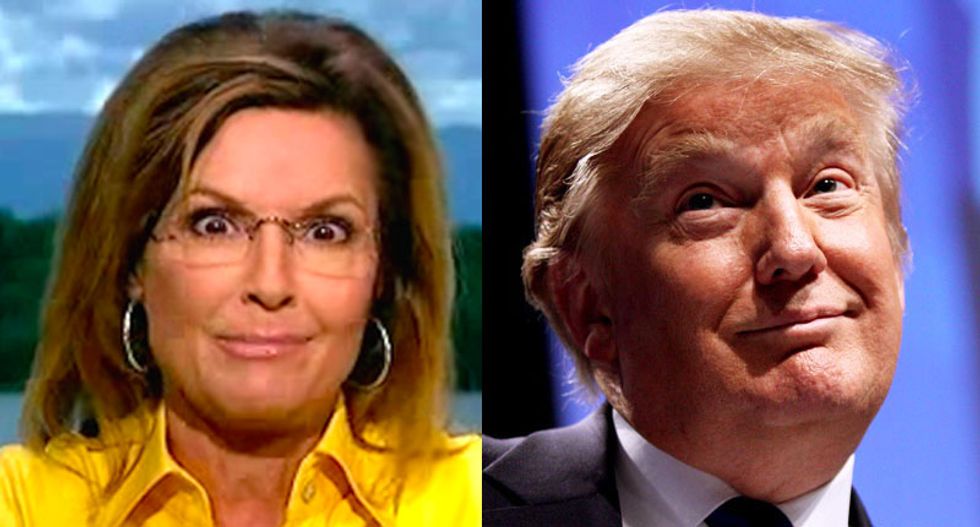 You may be forgiven for believing that Republicans learned a valuable lesson about the changing face of America in 2008 when a smooth-taking black man with a Muslim name was handed the keys to the Very Very White House Where Ronald Reagan Used To Live.

That year the GOP felt compelled to pair a cranky-pants war hero with the fluttering under-thrown Hail Mary pass that was Sarah Palin -- a ticket which promptly plummeted to the ground like a duck in the midst of a mid-flight aneurysm.

Mission accomplished. Also, too, mission failure. (Hint: They lost. It was in all of the papers.)

Palin's absurd elevation to almost "one acute myocardial infarction" away from the nuclear codes turned out to be a garish neon red sign flashing "Welcome wackos! Free buffet!" from the Republican party -- and boy did they ever turn out.

It's not that the base was ever the model of probity -- they've always been nuts -- but before Palin they at least had the decency to keep it to themselves or, at the very worst, sharing it with their comrades at their New World Order Black Helicopter Negro Threat Thursday meet-ups at the local Waffle House.

Now in the post-Palin era, the lunatic base is bellowing and screaming at the GOP from inside the house, and they haven't shut the hell up with their constant baying at the moon and demands for redder and bloodier meat from their hosts.

For a brief moment in time they were muted -- but not without much gibbering and poo-smearing on the walls -- when the party went old school and offered up a traditional GOP presidential entree of two bland white guys in 2102. (Hint: They lost too. It was also in all of the papers.)

Meanwhile the Palin style -- strung-together patriotic platitudes, grievance airing, paranoia, populist hoohah, media-bashing, faux nostalgia and dog-whistle bigotry -- lay there for the taking until an opportunistic Donald Trump scooped it up where Palin left it.

What Palin proved during the ill-fated run in 2008 is that a wildly flamboyant presence and contentless proclamations can suck up all the oxygen in the room because the media will eat it up with a shovel.

Palin was -- and still is -- strictly Wasilla-ville; yokel-yodeling an endless stream of words that frantically burst from her mouth like ants fleeing a flaming anthill.

Trump, on the other hand has been working the big leagues in New York for decades by belching out declaratory statements as short and grotesque as his sausage-like fingers.

Like Palin, Trump held out the promise of short term returns for the GOP with his potshots at Obama and Clinton, and by giving voice to the racist misogynistic nativist base while sucking up free airtime from the easily dazzled and ratings-conscious media. But the assumption was that his clown act would play itself into boorishness or that he would bail when he was no longer amused. Then the adults could take the wheel and dial the crazy down with a legacy candidate like Jeb Bush or sweaty climber like Marco Rubio.

But then something weird happened and Trump grew bigger and bigger and now he is steamrollering his way to the convention and beyond which could bring about a GOP down-ticket apocalypse that, no doubt, has RNC head Reince Priebus checking the want ads for any openings at a car wash as the head buffer.

Republican elders should have remembered that Sarah Palin's 2008  star turn resulted in her becoming the party's crazy ex-girlfriend who won't stop texting or banging on the door at 4AM because she's out of vodka. They should have seen the same qualities in fellow narcissist Donald Trump. But they didn't and that was then and this is now, and they have discovered to their dismay that "Clown Trump" is actually "John Wayne Gacy Trump," and that he has come to kill the everyone at the party.