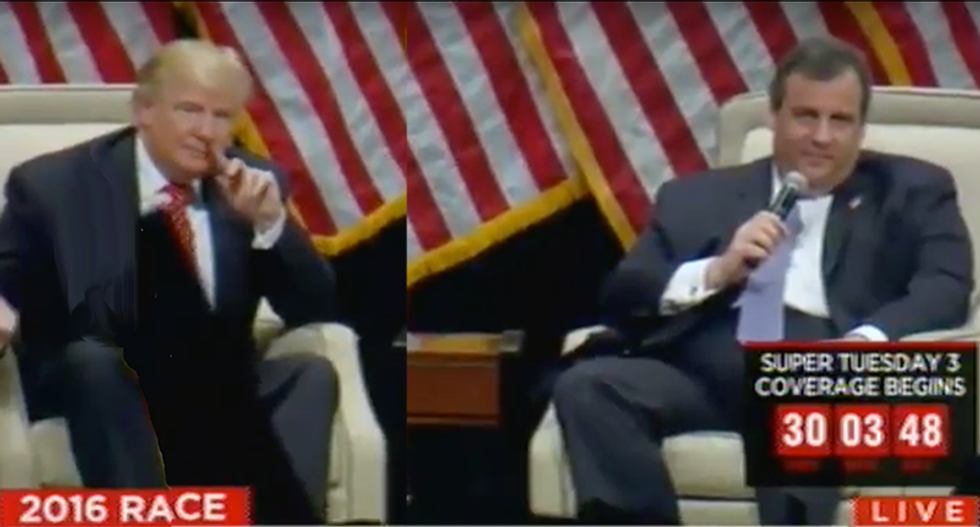 A protest broke out during a Donald Trump rally at Lenoir Rhyne University in North Carolina Monday. The format was a Q&A with New Jersey Governor Chris Christie who has been awkwardly campaigning with Trump. A small group of people held up signs asking people to turn their backs on hate. While the protesters were escorted from the building without incident, Trump took the opportunity to address the violence at his rallies.

"We had one a few weeks ago in Alabama, 35,000 people. No disruption. No nothing. But the press is now calling it, saying, 'Oh but there's such violence.' There's no violence. You know how many people have been hurt at our rallies? I think like basically none. Other than, I guess, somebody got hit once or something, but there's no violence. And you know in Chicago, we canceled because I didn't want to see, I mean, this huge group of people formed, like 3,000. We're going to have 25,000 people in Chicago, rather, and they've given me a lot of credit, Chris, because rather than having the rally and having people fighting, because we feel great, the people that are supporters of Donald Trump want to see America be great again."

Trump claimed that the media doesn't report when disruptions occur or protests break out for his competitors, specifically citing Senator Marco Rubio. "They don’t report them when they happen to someone else."

While Trump was making the claim that no violence occurred at his rallies and that no one has been hurt, CNN showed a side-by-side chart listing five incidents of violence and injury.

“It’s a movement, it’s a love fest,” Trump said of his rallies. “There’s anger where you look at the United States, and it can’t win anymore.”

Watch the full video of Trump's assessment on the violence at his rallies below:

The second major professional golf tournament of the year, the PGA Championship, takes place this week at Southern Hills Country Club in Tulsa, OK. It wasn't supposed to be that way.

Former President Donald Trump's Bedminster, NJ golf club originally was slated to be the venue - that is until the sport's governing organization decided it didn't want to be associated with someone who incited a riot at the U.S. Capitol in an effort to illegitimately retain the presidency.