Warren crushes Trump: Asking him for help is like 'if your house is on fire calling an arsonist' 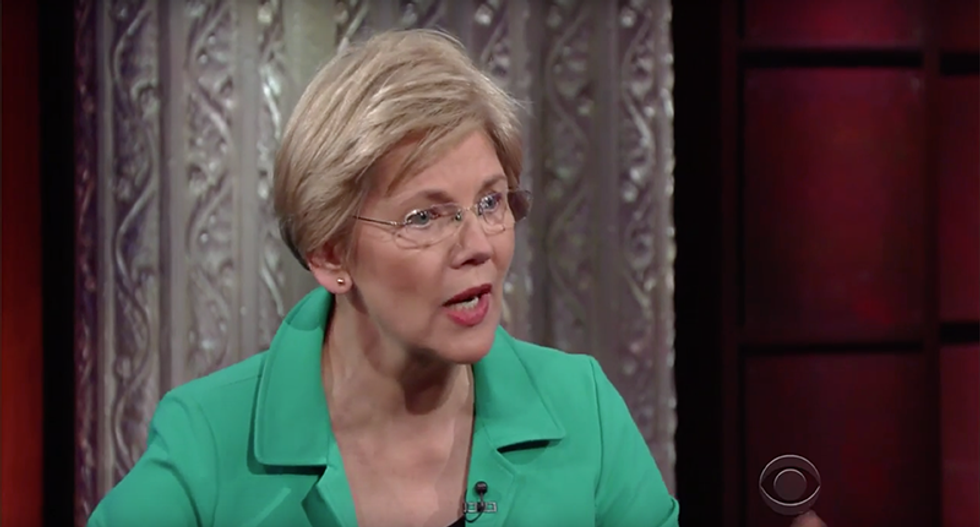 Senator Elizabeth Warren has called for Democrats to unite together to attack Donald Trump as the primary elections begin to wind down. She didn't relent in Wednesday's interview with "Late Show" host Stephen Colbert, but Stephen tried to find some common ground.

“Both of you feel the guys on Wall Street are getting away with stuff they shouldn't,” he said. “Isn't there some unity there between you and Donald Trump?”

“Let's be real clear,” Warren began. “Donald Trump is looking out for exactly one guy, and that guy's name is Donald Trump,” and the audience cheered. "Look, he smells that there is change in the air and what he wants to do is make sure that change works really, really well for Donald Trump."

Colbert repeated Trump's claims that he wanted to win for America so much we'd get tired of winning, but Warren wasn't having it. "This is the deal, you gotta kinda look a little closer at Donald Trump. Because this is his main claim to how it is that he says he's qualified to be president of the United States. He says, in business he wins, wins, wins. Well, the truth is: He inherited a fortune from his father... he kept it going by cheating and defrauding people, and then he treks detractors through chapter 11."

Attempting to clarify as a pre-emptive strike against litigation, Colbert said that Trump has never broken the law. Warren insisted that Trump has never been caught breaking the law. "Look, that really is the heart of it, that Donald Trump knows that there's change and the question is: 'So what's gonna happen from that?' We have an economy that's in real trouble. But when the economy is in this kind of trouble calling on Donald Trump for help is like, if your house is on fire, calling an arsonist to come help out."

Finally, Colbert brought up Warren's flame war on Twitter with Trump asking if it wasn't the same as what Trump does: Name calling. "Come on! This isn't name calling. This is taking the credential he claims he's running on and that is his business success and saying, 'No, buster, we're not buying that.' He is not a business success. He is a business loser." She then quoted some of the analysts who have said that if Trump had just taken his inheritance from his father and put it into index funds he would have been about as rich as he is today.