WATCH: Trump supporter stuns Cruz ally on CNN by naming her as one of Ted Cruz's alleged mistresses 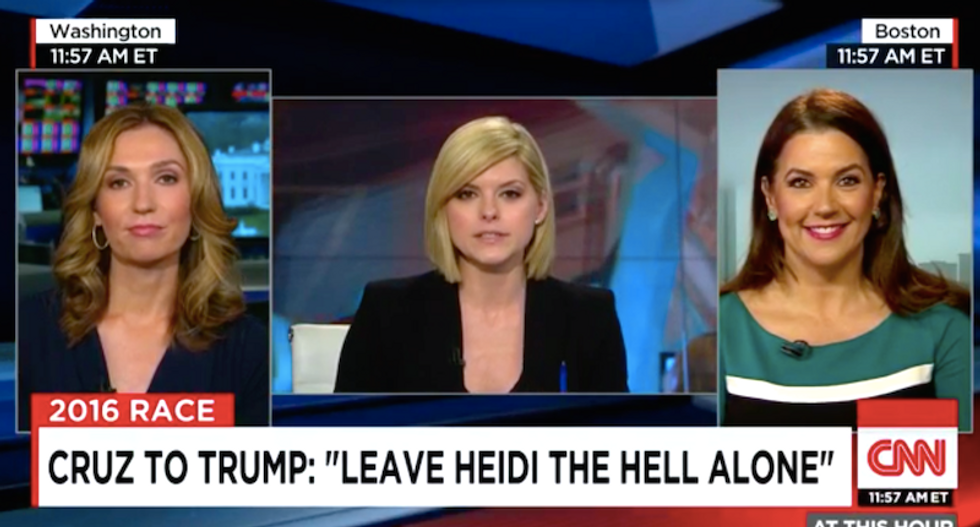 A conservative columnist who supports Donald Trump dropped a bombshell during an appearance on CNN.

Kate Bolduan, co-anchor of "At This Hour," hosted a discussion between Amanda Carpenter, the former communications director for Sen. Ted Cruz, and Adriana Cohen, a Boston Herald columnist and Trump supporter.

Bolduan asked Cohen if she thought the two Republican presidential candidates should drop their increasingly personal and ugly feud over one another's wives -- when the conservative columnist redirected the conversation toward rumors of Cruz's infidelity.

"Absolutely, I think we should move on," Cohen said, "and where we should move to is the National Enquirer story that has reported that Ted Cruz has allegedly had affairs with at least five mistresses -- including, you've been named, Amanda."

Carpenter's raised her eyebrows in shock, as Bolduan interrupted.

"I'm sorry, I don't think that's moving on at all, Adriana," she said, as Carpenter uttered a single sarcastic laugh.

Cohen said the Texas senator should issue a statement either denying the rumors or admitting they were true, and she again pointed out that Carpenter has been identified in the unconfirmed reports.

"You were named, Amanda," Cohen said. "Will you denounce this story or will you confront it?"

Carpenter again laughed derisively, and said, "this is tabloid trash," as Bolduan again interrupted to say CNN had no confirmation of the reports.

"What's out there is tabloid trash," Carpenter said. "If someone wants to comment on it, they can talk to my lawyer. It is categorically false, and you should be ashamed of spreading this kind of smut. Donald Trump supporters should be held to account for it. I will not be intimidated."

Cohen broke in at that point, saying she is not spreading smut.

Bolduan said she had spent all morning refereeing arguments between Cruz and Trump supporters over the rumors, which she said had not been confirmed by credible reporting.

"Let's talk about Wisconsin and how important Wisconsin is to the future of these candidates," Bolduan said, laughing.

Are Donald Trump supporters ready for him to move on from feud with Ted Cruz? Heated panel moderated by @KateBolduan https://t.co/QNZLYpDi85