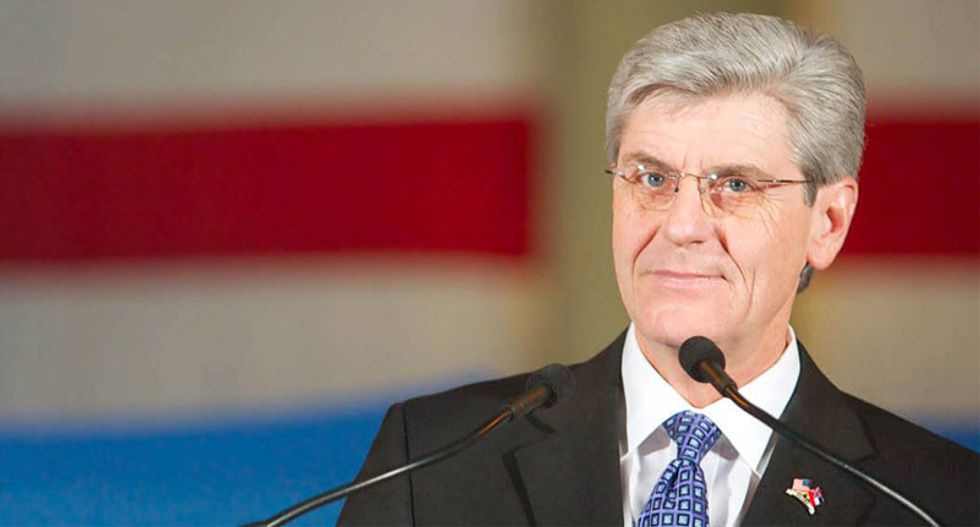 Mississippi Gov. Phil Bryant (R) has signed into the law the bill passed last week by the state legislature, to legalize discrimination by both public employees and private businesses against gay couples, transgender people, and even those who have premarital sex. (Though as the bill's sponsor said, it's really just meant to be against the LGBT community.)

And on social media, the state has instantly become a widespread focus of ridicule. So here's a collection of some of it.

Many of these tweets are from well known writers, some are celebrities — and others are just regular people out there who had something witty to say. (Though just to be on the safe side, we have avoided outright usage of vulgarity.) They are presented in roughly the order that this author first spotted them.

Mississippi ranks last in education & median household income but governor is more concerned about the gays. Hey, yall are #1 in bigotry now
— The Gay Burn Book (@The Gay Burn Book) 1459877795.0

How sad. Poor Mississippi, drifting backwards in time, floating away from us and humanity. https://t.co/YqGmRhLjQO
— Neil Gaiman (@Neil Gaiman) 1459881120.0

Way to live down to the stereotype, @PhilBryantMS. I shouldn’t have to be embarrassed to tell people where I live. https://t.co/Rf3IWxFmeU
— Gary Parrish (@Gary Parrish) 1459874754.0

Young Democrats are right: There is no reason to date or befriend Trump voters

You have to give it to Axios: They know how to throw out some tasty bait. Their latest is irresistible for conservatives, who love any story that frames them as victims, and gives them the chance to blame the left for "incivility." Never mind obvious counter-examples such as the storming of the Capitol, gun-waving Christmas cards, and the entire person of Donald Trump.

Federal officials unveiled charges on Wednesday against an alleged MAGA rioter who bragged in social media posts about storming the Capitol while carrying around a can of Coors Light.

According to a newly unsealed indictment, Texas resident Thomas Paul Conover walked into the Capitol building after it was breached on January 6th and proceeded to walk around taking photos of himself while holding an empty beer can.

Republican governors were so irate about the situation they perceived to be unfolding on the U.S.-Mexico border that they deployed their own National Guard troops.

What unfolded was such a disaster that even GOP officials in Congress admit that it was shocking and "reprehensible."