10 horrifying tales about half-human, half-animal monsters that lurk in our nightmares 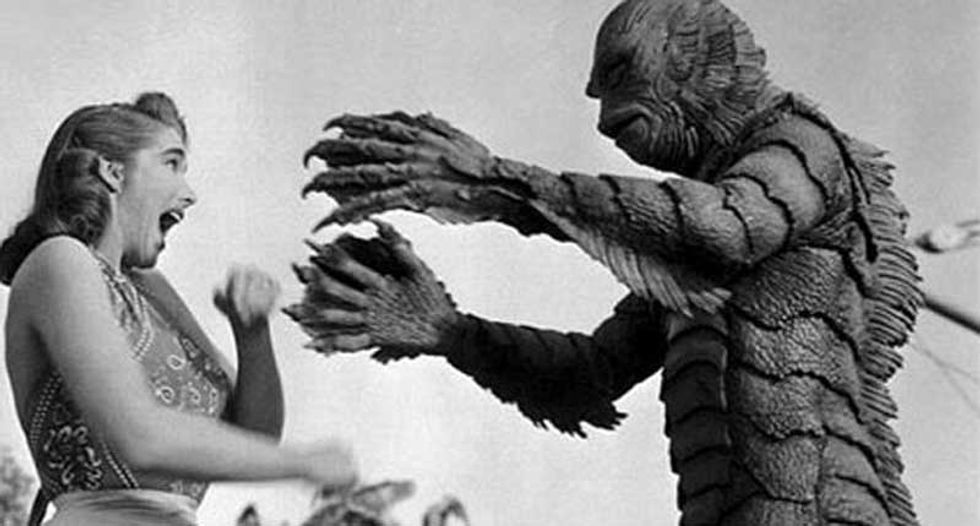 Screenshot from Universal Pictures' "Creature from the Black Lagoon" (Universal)

The Pope Lick Trestle monster struck again over the weekend, when a 26-year-old woman was killed by a train while searching for the mythical half-man, half-goat beast.

But the Pope Lick Monster is only one of many cryptid-hominid monsters that roam our nightmares, combining elements of humans with combinations of animals or mythological beasts. Each of these creatures — just a subset of the stories of bogeymen, witches, and monsters who stalk the woods, swamps, waters, and cities — are still reported in various local newspapers and blogs. Raw Story presents you with 10 of these creatures, but please be warned: Hunting these creatures may be dangerous … or fatal.

YOWIE Visitors to Queensland should be careful driving at night: The 200-pound, five foot-tall ogre with the “monkey’s bottom,” and night vision, has been seen on the roadside by drivers. In 2009, Yowie hunter Dean Harrison says that the beast beat him black and blue and would have killed him if friends hadn’t intervened. The ape-like hominid has long black hair, and stories of an ape-man who hid in the bush were first told to white settlers by the aboriginal people. Yowie sightings are still common.

MOMO The blood-curdling screams of two young boys cut the air of the Missouri woods in 1972. Their sister saw a seven-foot tall monster clutching a dead dog under its arm, blood all over Momo’s fur and a stench that has not been forgotten. In the following days, dogs disappeared. People sitting in their backyards encountered the long-haired behemoth with red eyes and the smell of death about him.

SPRING-HEELED JACK In the Lavender Hill region  of London, Mary Stevens was accosted late one night by a man-like creature with claws that were “cold and clammy as those of a corpse.” In later encounters, the creature jumped on the backs of carriages, frightening the horses and causing drivers to crash. The monster’s high-pitched laughter and the “red-balled eyes of fire” were reported as far north as Liverpool. In 2012, Spring-Heeled Jack terrified a 4-year old boy and his family on Valentine’s Day as the dark figure darted across a crosswalk while they rode in a taxi.

WENDIGO Fans of the X-Files remember the monster of the forest that led to a series of shootings in Montana. First recounted in Algonquian and Ojibwe tales, the creature stalks its human victims and devours their flesh. It can be recognized by its skeleton-like appearance, a man with eyes buried in deep sockets, its flesh tattered and torn, and reeking from the open sores upon its body. Sighted as recently as 2013, visitors to the northern American woods should be wary of this ancient zombie.

FOUKE MONSTER The The Fouke Monster attacked a family, punching in a screen to get to a woman and then throwing her husband down to the ground and scratching him. The seven-foot Bigfoot-like creature has been seen running quickly, swinging its arms like a monkey. It stinks worse than a skunk, according to those who have caught wind of it.  Thirty years later, the original reporter on the story says that it was evident that the man who ended up in the emergency room during that first attack was scared: The encounter with the monster had left him in shock.

THETIS LAKE MONSTER A monster that is part Tegu lizard, part human haunts the waters of British Columbia’s Thetis Lake. The Royal Canadian Mounted Police searched for it after teenagers were attacked, and who, according to the Mounties “seem sincere, and until we determine otherwise we have no alternative but to continue our investigation.” In 2012, the lizard man was seen by a fisherman, and was also seen eating cat food on the backporch of a house. Witnesses have reported the hominid as having webbed hands and having a “monster face … scaly [with] a point sticking out of its head.” It is also said to have gigantic ears. If your fishing line pulls up something big in Thetis Lake, be careful: It may not be a big trout.

AM FEAR LIATH MHOR Each year, thousands of hikers from around the world clamber through the Cairngorms, the peaks close to the Queen's summer residence, Balmoral Castle. Since the late 1800s hikers have reported terrifying encounters with Am Fear Liath Mhor, the Big Greyman that stalks the slopes of Ben Macdui, the UK’s second-highest peak. Described by as being huge, grey, with long talons and big feet, those who have survived remembered panic and dread when hearing the specter's footsteps behind them in the mist, reporting that they felt compelled to jump off to their deaths by the feelings he evoked. Some have even reported that the man itself comprises mist, which make the next walk in the fog terrifying to contemplate.

JERSEY DEVIL The National Hockey Team, the New Jersey Devils, are named for the monster that has haunted the Pine Barrens of New Jersey for nearly three centuries. While its  origins are disputed, everyone agrees that the devil began as a human child born to a human mother in the 1700s. Differing versions describe it either as the progeny of Satan impregnating a woman, or else, as a human child who was born with startling birth defects. The devil has a horse's hooves, a forked tail and wings. In 2015 a Jersey man documented his encounter with the monster, proving that there are more things to be feared in the Pine Barrens than lost mobsters.

HONEY ISLAND SWAMP MONSTER In Louisiana, in the 1960s, two hunters reported seeing a tall, ape-like gray-haired monster with a terrible smell devouring a wild boar in the swamps of Honey Island. Previous Native American stories called the creature Letiche and the Cajuns refer to it as Loup-Carou. One story claims the monster’s origins as the result of a train derailment in which monkeys escaped and mated with alligators. It was last sighted in 1973, by a man in a canoe who bumped into in the water.