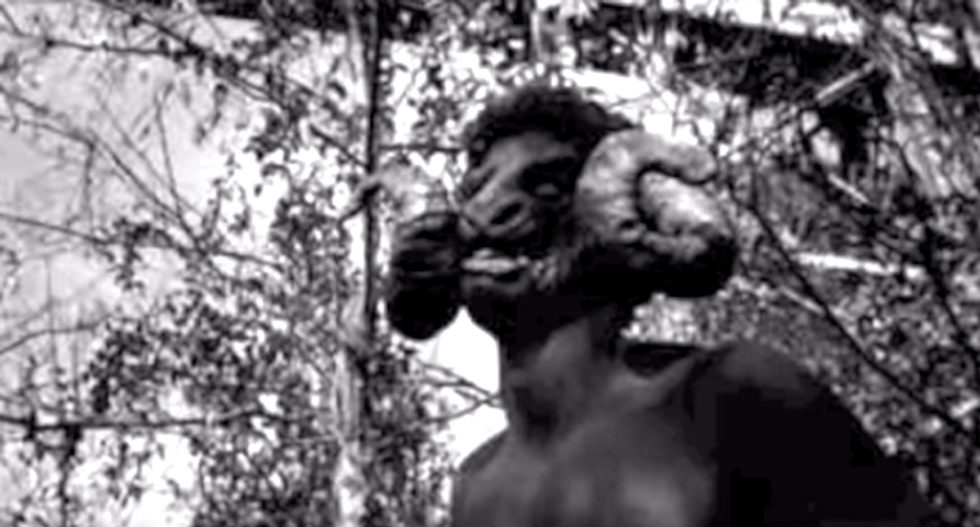 An Ohio woman was struck and killed by a train while looking for a mythical creature that, according to legend, tricks people into climbing onto a railroad trestle.

Roquel Bain died of multiple blunt-force trauma injures about 7:30 p.m. Saturday when she was struck and then knocked from the trestle in Kentucky, reported WHAS-TV.

The Dayton woman and her boyfriend had been visiting Louisville to take a ghost tour of the disused Waverly Hills Sanitorium, but the couple first decided to investigate the "Pope Lick Monster" urban legend.

"It's been around for years, even my nieces and nephews used to go and come out here," said Denise Harris, who lives nearby. "The Goatman, when they climb up on the trestles and they cross it -- he's supposed to come out when they cross it."

The couple walked onto the Pope Lick Trestle -- where the half-man, half-goat creature has allegedly been spotted -- but were surprised by a train.

"I see a train pass every 30 minutes or so," said another neighbor, Michelle Burns. "It's shocking, people hear about so many deaths and they still take the risk."

Bain and her boyfriend realized they would not be able to cross the trestle in time, so they decided to hang off the sides until the train passed.

The 26-year-old Bain was not able to move quickly enough to avoid the train -- which struck her and hurled her 80 to 100 feet to the ground below.

She was pronounced dead at the scene.

A security guard at Waverly Hills Sanatorium said Bain had purchased two tickets for a tour of the disused hospital, which was built to house victims of a tuberculosis outbreak in the early 1900s and now hosts ghost tours of its supposedly haunted campus.

Bain, who worked as a surgical assistant, and her boyfriend had been set to tour the sanatorium from 10 p.m. to midnight with about 45 other ghost hunters.

The train engineer said he was traveling about 32 mph when he spotted the couple on the tracks, sounded the horn and tried to brake.

Investigators will review the train's video footage, which captured the fatal incident.

Several other people have been killed on the trestle in recent years, including a homeless man who fell asleep on the tracks, but the deputy coroner said this is the first confirmed victim who died searching for the Goatman.

A variety of tales and legends explain the mythical creature and its origins.

Some say the monster is the offspring of a local farmer who had unnatural relations with his livestock, while others say the Goatman was a satanic farmer whose animal sacrifices gave him the power to live forever but doomed him to walk the trestle as a hideous beast.

Another legend claims the Goatman was part of a traveling circus in the 1800s -- until lightning struck a train and killed everyone aboard, except for the freakish creature.

Watch this documentary about the Pope Lick Trestle monster: