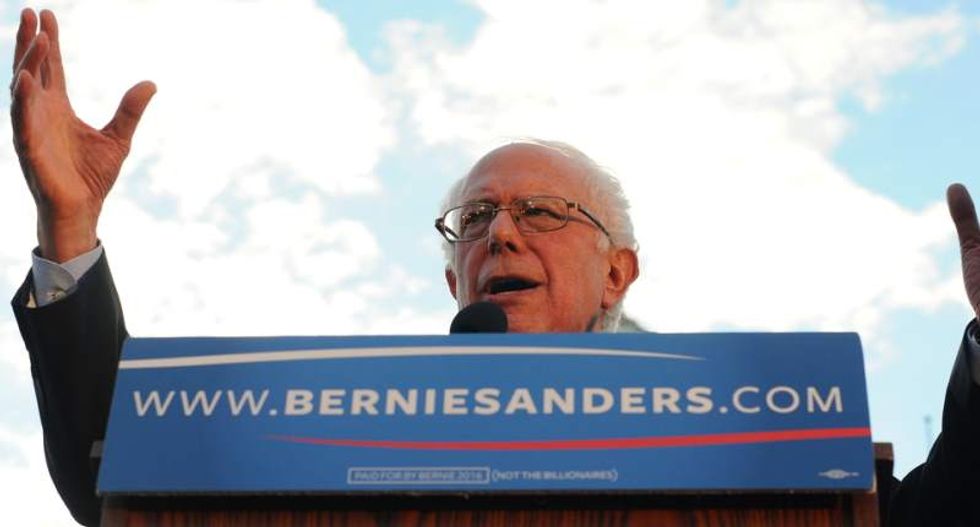 It is the best of times and the worst of times for Vermont Senator Bernie Sanders.

Sanders has run an impressive campaign since announcing last April that he would forgo his independent status and run for the 2016 Democratic presidential nomination. The idea, when people first suggested that he run, was that he would pressure former New York senator and Secretary of State Hillary Clinton to move to the left -- despite there being little evidence that what is said on the campaign trail actually comes to pass after winning the election.

No matter. Game on.

At this point -- in remembrance of the sad campaign of former GOP nominee Marco Rubio -- we need to  dispense with the notion that Sanders now has anything better than a slim chance of winning enough delegates to pull off an upset despite winning six of the last seven primaries.

The numbers just aren’t there.

What little chance Sanders still has depends upon his campaign persuading superdelegates to jump on his bandwagon. But that bandwagon hit a couple of potholes over the last 36 hours because Bernie and his campaign manager both said some very dumb things -- and Sanders did a face-plant in an interview with the New York Daily News -- all of which should give superdelegates, many of whom  also happen to be Democratic officeholders, pause.

Tuesday night, Sanders campaign manager Jeff Weaver warned the Clinton campaign to not, "destroy the Democratic Party to satisfy the secretary's ambitions to become president of the United States."

This, of course, is laughable aimed as it is at a candidate who has garnered more than 2.4 million more votes than her rival, but also coming from a campaign that has given zero, nada, nothing, bupkis, zilch to down-ticket Democratic candidates for their own campaigns while Clinton has kicked in close to $30 million. In fact Sanders -- who pulled in a cool $44 million in March - admitted that he chose to run as a Democrat for the money.

“To run as an independent, you need — you could be a billionaire," Sanders explained "If you're a billionaire, you can do that. I'm not a billionaire. So the structure of American politics today is such that I thought the right ethic was to run within the Democratic Party.”

It wouldn't be surprising if those superdelegate Democratic officeholders who are getting stiffed by Bernie already look at him as some random guy who bummed a ride in their car for the drive from Vermont to Orlando to see Phish -- but adamantly refuses to come up with "ass, gas or grass."

Ask your parents about that one, kids.

Strike two came Wednesday night when Sanders went off half-cocked because of a misleading headline in the Washington Post reading: "Clinton questions whether Sanders is qualified to be president."

If only someone in the Sanders campaign had actually taken a second to read the transcript -- where Clinton not only said no such thing, but went out of her way to avoid saying it -- before revving Bernie up before a speech in Philadelphia (video below).

Then he probably would not have said the following:

These may be reasons to not vote for Clinton, but they are hardly evidence of a lack of qualifications. In fact, with the exception of the Iraq vote in the case of Obama, what he accused Clinton of could also be applied to Obama, Joe Biden and John Kerry.

So, basically, the only person "qualified" to be the Democratic nominee for president -- is the guy who's not a Democrat.

Of course, what brought this whole fit of Bernie pique on was the interview he did with the NYDN that was a dumpster fire of unpreparedness by a candidate who already has difficulty moving off stump speech bullet points.

You can read some choice bits here, and I don't mean to be unkind, but it had echoes of Sarah Palin's disastrous  "All of them, Katie" interview.

I like Bernie Sanders -- some of his followers not so much, although I could also say the same for some of Hillary's minions *coughLannnyDaviscough* -- but what started out as a refreshing challenge has turned into just another political campaign by just another politician who seems to be under undue influence by campaign consultants who want to keep those fat paychecks rolling in for a few weeks more.

And that's a shame, because the Sanders people-powered campaign might actually be a model for future campaigns for lesser political offices. That is how you create a "revolution"  -- not with Twitter hashtags and definitely not with only showing up to vote during presidential elections.

Maybe people will remember this guy instead:

"If you look at politics as a baseball game or a football game, then I’m supposed to be telling the people that my opponents are the worst people in the world and I’m great. That’s crap; I don’t believe that for a second."

He added, "I don’t need to spend my life attacking Hillary Clinton or anybody else. I want to talk about my ideas on the issues.”

Yeah. Those were the days.

Whatever happened to that guy?