Bernie Sanders dismisses Clinton lead: 'A lot of that came from the South' 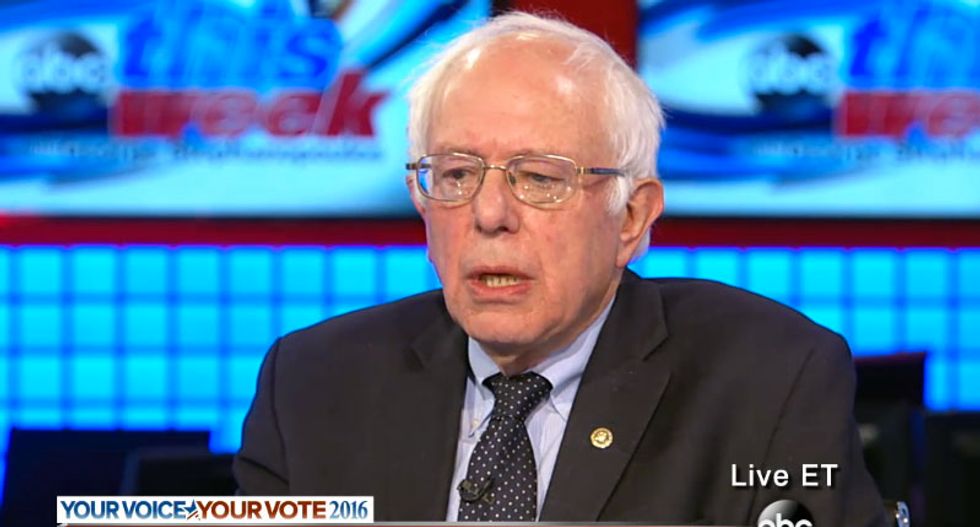 Appearing on ABC's This Week, Vermont Sen. Bernie Sanders -- who has run off an impressive string of primary victories -- dismissed actual vote totals that show former Secretary of State Hillary Clinton with a commanding lead, saying those votes "came from the South."

Host George Stephanopoulos noted Clinton's lead in delegates and asked the senator if he would take his fight for the nomination to the floor of the convention.

"Well, here's what I think," Sanders replied. "I think at the end of the day, what Democrats all over this country want to make sure is that somebody like a Donald Trump or a Ted Cruz does not end up in the White House. And I think what more and more Democrats are seeing is that Bernie Sanders is the stronger candidate."

"Well, she is getting more votes. A lot of that came from the South," Sanders parried. "But if you look at the polling out there, we do a lot better against Trump and the other Republicans in almost every instance -- not every one -- than she does. And the reason is that we both get a lot of Democrats, but I get a lot more independents than she does."

Sanders comments fall in line with statements made by his own campaign that Clinton is doing well in states that might not fall into the Democratic column in the November election despite inroads made by President Obama in 2012.

Sanders also addressed the controversy from earlier in the week when he claimed Clinton is not "qualified" to be president, blaming his response on her campaign questioning his competency.

"Well, she didn't quite say that. But her surrogates implied that," he responded. "And all that I meant by that is that if you vote for the war in Iraq, which turned out to be the worst foreign policy blunder in the modern history of America, if you take, through your super PAC, tens and tens of millions of dollars from Wall Street and other special interests, if you support almost every disastrous trade agreement in this last 30 years..."

"Well, President Obama supported that," the host interrupted. "Is he not qualified?"