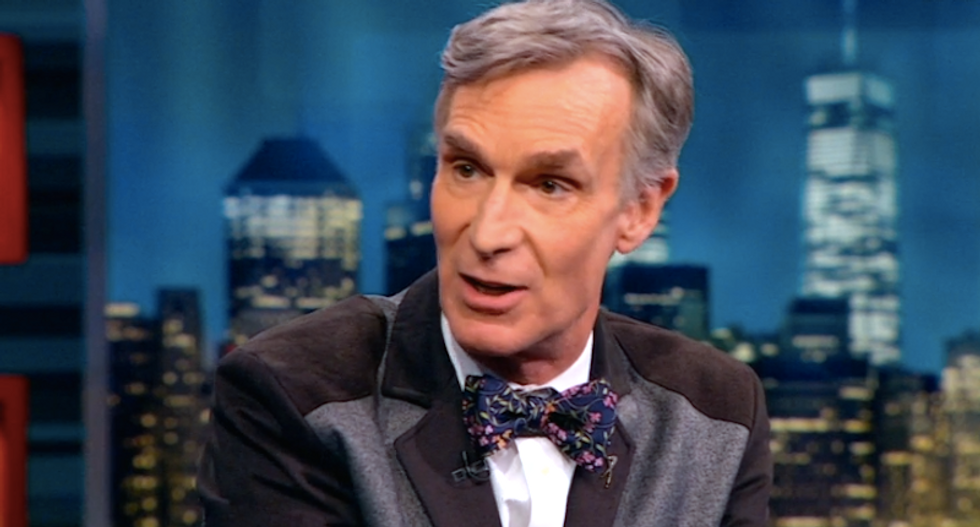 Bill Nye said voters and the media have been so fascinated by the Republican presidential primary circus that the candidates haven't gotten around to addressing important issues.

The "Science Guy" appeared Tuesday night on "The Nightly Show," where host Larry Wilmore pointed out that GOP candidates Donald Trump and Ted Cruz have not been asked a single debate question about climate change.

"Who knows what will happen at the convention, who's going to be vice president?" Nye said. "Might be a woman on the ticket, and so on. But all of them so far have been adamant deniers."

Nye said climate deniers are starting to soft-pedal their refusal to believe humans are altering the earth's atmosphere by rebranding themselves as "doubters," as if they simply have some questions about the scientific consensus.

"These guys are in denial, they're adamant," he said. "They don't see the connection between carbon dioxide, methane, the world getting warmer -- they ignore all the data."

Nye said conservative candidates are funded by the fossil fuel industry, and he said few voters list climate change among their chief concerns -- and he blamed oil industry-funded deniers.

"As Upton Sinclair said, 'It's very hard to convince a man of something when his salary depends on his not understanding it,'" Nye said.

Wilmore asked if their denial was sincere, or simply political -- which he said would be "pure bullshit."

"It should be a global issue that we should all be concerned about, I mean, nominally, scientifically," Nye said. "I like to say that climate change was discovered, it wasn't made up. People looked at the data and they noticed -- if you go to Glacier National Park, it's sort of muddy hillside national park."

He disagreed that climate deniers were stupid, saying that catastrophic environmental damage was just far enough into the future that people simply couldn't comprehend its importance.

Nye said those changes could come as soon as 2030, and he mentioned two pregnant friends who were terrified by the Zika virus.

"We need big ideas, we need big wind turbines, we need big solar panels," he said. "We could do this, and the example I always give everybody is World War II -- people solved an enormous problem in five years. They didn't run in circles screaming."

But that was an immediate threat, Wilmore pointed out.

"They didn't think there was a threat of Japan invading in 50 years," Wilmore said. "They bombed Pearl Harbor yesterday."

Nye agreed, saying his own parents had told him that no one believed Japan would attack the U.S. until it happened.

Wilmore asked how climate change could be divorced from politics, saying it hadn't always been a political issue.

"Hey, out there," Nye said, addressing the audience. "If you're out there, some hard-hitting investigative reporters. We recognize you because you wear knit ties, and they're loose. I want you to ask the candidates about climate change, directly -- what are you going to do about climate change? What we need are big ideas to pull together and do these extraordinary things. Hoover Dam, Grand Coulee Dam, person on the moon -- we can do big things."

"So along this line, everybody, if you're out there, don't be surprised if after the conservatives, the Republicans, pick somebody, this person goes, 'Well, I've been thinking about it, and climate change is a big issue,'" Nye said. "Because I don't think they can quite get enough 'they' -- I don't think the party can quite get enough votes without millennials. Climate denial is almost entirely generational -- only now and then do you meet a young person (who denies climate change)."