Chris Cuomo flays Trump for 'woman card' attack: 'How do you call someone out for being a woman?' 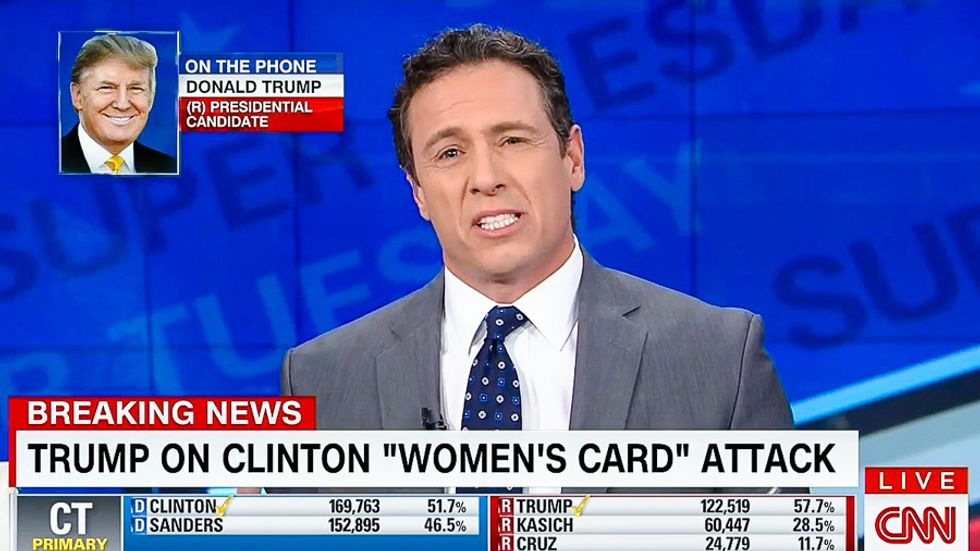 CNN host Chris Cuomo on Wednesday asked presumptive Republican presidential nominee Donald Trump how he expected to win with a strategy of reducing Hillary Clinton to "just a woman."

After Trump won big in five states on Tuesday, he argued in his victory speech that Clinton was playing "the woman card" and that she would only get 5 percent of the vote if she were a man.

"Do you think that's a winning formula for saying 'the woman card' is all that Hillary Clinton has?" Cuomo asked Trump on Wednesday.

"Yes," Trump insisted. "She is a woman, she is playing the woman card left and right. She didn't play it last time [in 2008] with Obama but she is playing it much harder this time. And she will be called on it."

"How do you call someone on being a woman?" Cuomo wondered.

"You just tell them they're playing the woman's card," the front-runner stated.

"But what does that mean?" Cuomo pressed.

"If she didn't, she would do very poorly," Trump opined. "I know it because I think if she were a man and she was the way she is, she would get virtually no votes."

"It sounds dismissive of her gender," the CNN host observed.