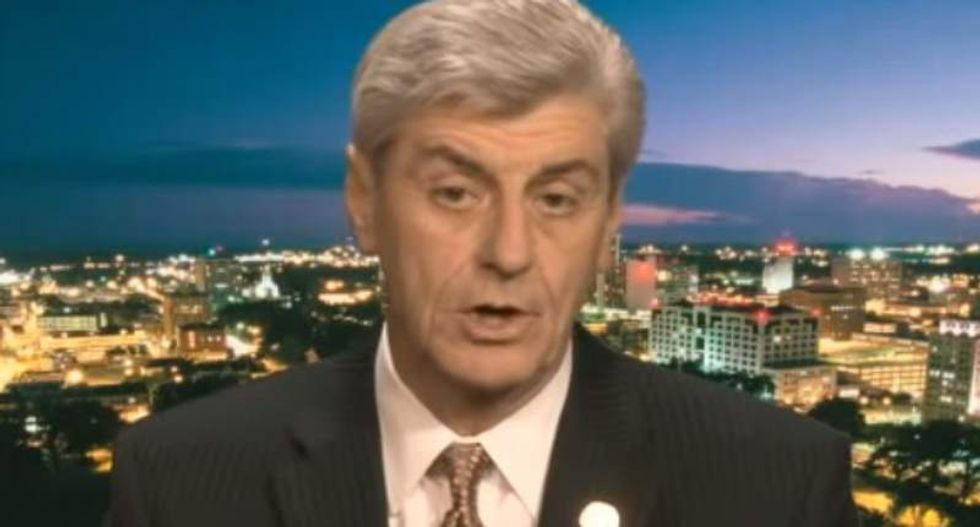 The city of Jackson is quickly emerging as a hotbed of opposition against the state's new law, signed Tuesday by Republican Gov. Phil Bryant, legalizing anti-LGBT discrimination by both public employees and private businesses.

At a meeting Tuesday night, The Clarion-Ledger reports, Jackson City Council passed a resolution condemning the law for sanctioning "overt acts of discrimination," and declaring in response: "the City of Jackson does not sanction or tolerate discrimination against its citizens or visitors and seeks to preserve and protect the rights of all individuals regardless of religion or identity."

Jackson Mayor Tony Yarber also posted a statement, directly tying the fight against the new law to the city and state's past struggles over civil rights.

“As a predominantly black city in Mississippi, the Jackson community has endured racism, discrimination and injustice over the years," Yarber said. "We are Mississippi’s capital city, and as part of our declaration of being the ‘Bold New City,’ we will not discriminate against any individual because of race, religious beliefs or sexual orientation, nor do we support legislation that allows for such discrimination.”

And in addition The Clarion-Ledger itself, as the state's largest newspaper, is slamming the new law in an official editorial.

"It's also, unfortunately, a stereotype Mississippi has earned — yet again."

The editorial lambasts Bryant for the effect the new law will have on the state's already damaged public image, and concludes: "With a final stroke of that pen, Mississippi welcomed its latest Jim Crow law and displayed a sign for the world to see: Welcome to Mississippi. No gays allowed.

"Mississippi and its citizens deserve better than this unconscionable law."

Todd Stauffer, publisher of the alternative-weekly Jackson Free Press, has penned a column calling upon state residents to stand up for progress against intolerance.

"First, let's be brutally clear about what the 'Protecting Freedom of Conscience from Government Discrimination Act' does," Stauffer writes: "It codifies protections for citizens (let's call them 'first-class citizens') who desire to discriminate against certain other citizens (call them 'second-class citizens') because the first-class citizens hold a 'belief or conviction' that the second-class citizen (a) is lawfully married to the wrong person, (b) is lawfully having sex with the wrong person or (c) doesn't identify appropriately with their 'immutable biological sex' they were noted to have "at the time of birth."

Stauffer concludes with a call for a response, in the spirit of the state's "If You're Buying, We're Selling" slogan for economic development — "to make it clear to people who have marriages or loving relationships that are defined outside the scope of this legislation that they can find services and businesses where they feel safe and accepted."

"The last thing that we can accept in Mississippi is the loss of more young, creative minds who represent a bright future for a beautiful state with a troubled past," Stauffer declares. "It's time to roll up our sleeves and work hard to let the world know that there's more to the Hospitality State than its inhospitable elected officials. If you're buying, we're selling."