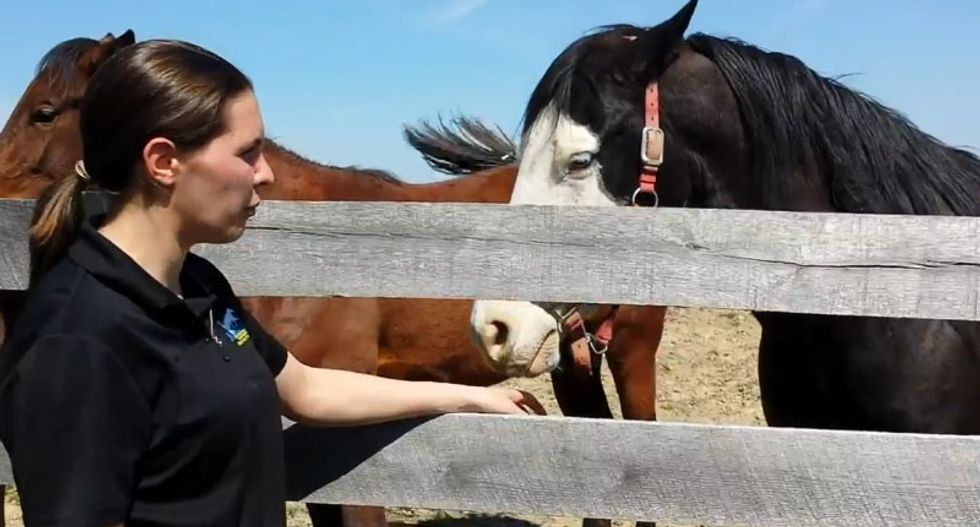 In New York's Southern Tier, local newspapers are investigating the connection between a local racetrack owner's sick foals and the fracking fluids present on his farmland. The Ithaca Journal featured a report by Tom Wilber in which he investigated the ongoing issue with foals being born without the ability to swallow -- seventeen of them so far -- on the breeding farm of Jeff Gural, owner of the Tioga Downs, Meadowlands Racetrack, and Vernon Downs.

The foals have survived, although all of them have had to be transported to Cornell's School of Veterinary Medicine, located fifty miles north in Ithaca, New York. An earlier study by Cornell professor Robert Oswald and Cornell veterinarian Michelle Bamberger linked the presence of the byproducts of hydraulic fracturing to numerous animal deaths and stillbirths. Their research included twenty-four case studies of multiple farm animals who had either been killed outright by the cocktail of chemicals or later proved unable to successfully reproduce after exposure.

The vets are conducting their own study of what may be causing the epidemic of horse birth defects. The veterinary team cite the presence of a gas well adjacent to Gural's land that was drilled by Chesapeake Appalachia LLC as the "prime suspect" in the Gural farm problems. The Pennsylvania Department of Environmental Protection confirmed that the farm's water is contaminated, although they failed to cite Chesapeake as the cause.

Gural is on record as a supporter of gas shale exploration in the Southern Tier. He still is. "It created jobs in Pennsylvania, and look what it's done for the price of gas," he said in an interview. But he is mad that so far, companies have not had to disclose what comprises fracking fluid because of the so-called "Halliburton Loophole."

"That they don't have to tell you what chemicals they are using is ridiculous," says Gural, although he is quick to blame the lobbying power of the gas and oil industry rather than holding Chesapeake liable.

Scientists at Cornell are conducting a two-year study on Gural's farm to investigate links between the plethora of deformed foals and fracking fluids. Foals with the inability to swallow, a condition called "dysphagia," were born on other properties--but all of their pregnant mothers had drunk water at Gural's farm at some point in their pregnancies.

New York has resisted a lobbying effort by the gas and oil industry to allow fracking along the Southern Tier. Governor Andrew Cuomo declared a moratorium on hydraulic fracturing in the state in December of 2014. Pennsylvania approved fracking with very little investigation of possible health hazards, and this latest case is one of many that have demonstrated that their rush to judgment may be environmentally costly in ways that will offset the economic benefits of the practice.

Watch video, courtesy of the Ithaca Journal, below: