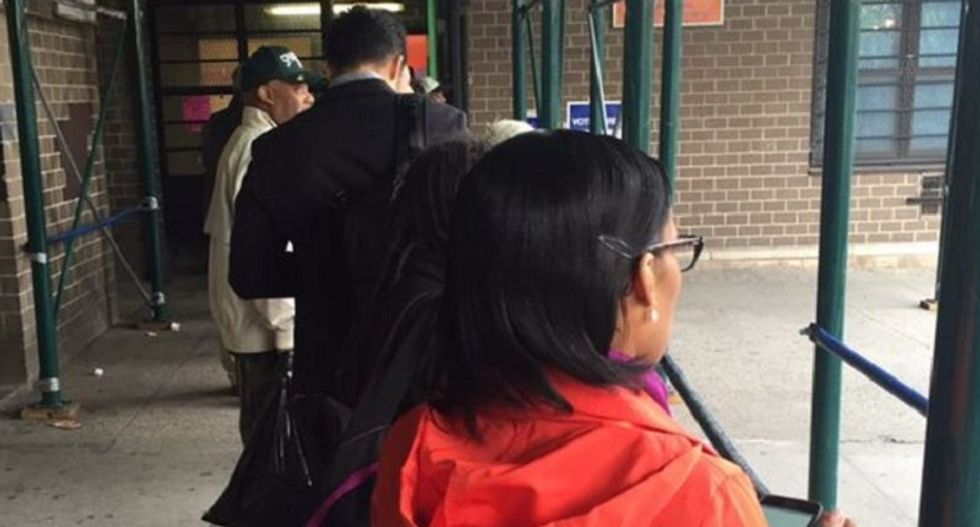 Voter wait to vote in the New York primary (Twitter)

Problems were reported at polling places amid a pivotal primary in New York, DNAInfo reports.

Voters reported not being able to vote in polling places they have used for years. Some polling places were moved but voters seemed to be taken by surprise.

"I was expecting to vote," a 77-year-old woman named Sarah told DNAInfo. "It's sabotage."

Sarah had been voting at P.S. 9 on West 84th Street, which had been a neighborhood polling place for 40 years.

DNAInfo reports the New York Board of Elections moved several polling places on the Upper West Side.

"[The worker] double checked my address and quickly said 'it looks like you'll have to vote via affidavit also, that's been happening a lot today,'" Matthew Spiegelman told the website. "I never had this issue before."

And voters waited at a polling place in Bed-Stuy when it wasn't ready, two hours after it was set to open.

The Gothamist further reports some of the primary ballots are confusing. Writes John del Signore:

Some voters, including myself, are a little confused about the ballot, which in the 12th Congressional District says voters can select seven delegates. But there are only six delegates listed as pledged for Bernie Sanders, while seven are listed as pledged for Hillary Clinton. I asked a poll worker if it was necessary to select seven delegates, or if I could just pick six, and she told me, "Oh, it doesn't matter. Some people don't even fill that part out."

Del Signore reports hundreds of people showed up to vote in Jackson Heights and were told their names were not on voter rolls.

"I'd say 30% are not registered, even though they thought they were," polling site coordinator Jose Ruiz said.

"I then came back and was told them I was a registered Republican, and they instructed me that they had no ballots for my table but I could either come back or just vote affidavit," Katelyn Glass told the Gothamist. "The women in charge literally said, 'You're going to love this. They never delivered the Republican ballots. I'm a Democrat, but even I think this is a complete injustice.'"