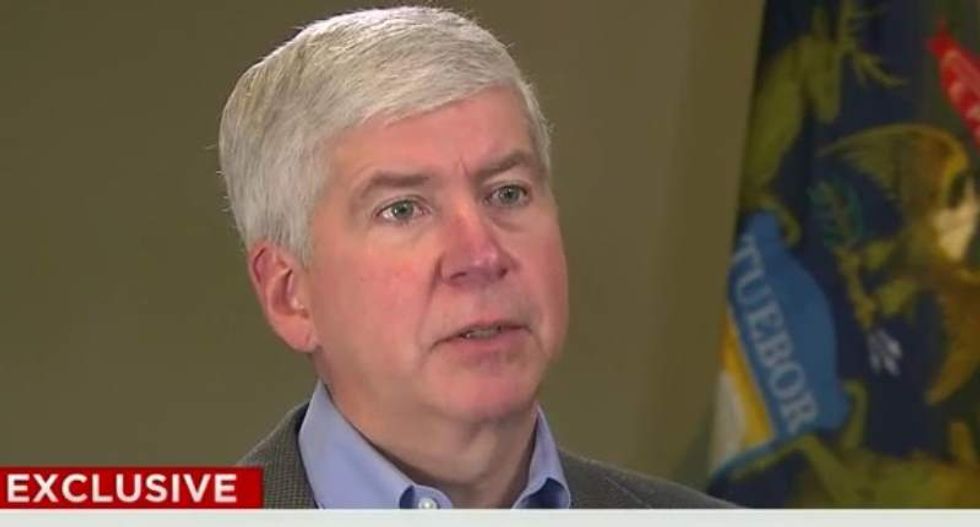 A federal racketeering lawsuit by hundreds of resident in Flint, Michigan , is alleging the city’s two-year water crisis was the result of an“intentional scheme” crafted by state officials and Michigan governor Rick Snyder to balance the city’s budget.

In a press conference announcing the 17-count racketeer influenced and corrupt organizations ( Rico ) complaint on Wednesday, attorneys said the state of Michigan ran Flint’s day-to-day operations through an emergency manager, who prioritized balancing the city’s budget through a cost-cutting measure: switching Flint’s water source in April 2014 from Lake Huron, which serviced the city for more than 50 years, to a local river.

Related: 'It's affected everybody': Flint children on the frontline of the water crisis

The decision, estimated at the time to save the city between $1m and $2m annually, sparked a cascade of problems for the cash-strapped city, when the state department of environmental quality didn’t require the river water to be treated with corrosion control agents, which allowed lead to leach off pipes and flow into households.

The potential class-action suit, which names more than 400 plaintiffs, said Michigan had the option to use “time-tested, well-honed” federal bankruptcy protections for Flint, rather than appoint an emergency manager with a mandate to balance the books. John Clark, an associate with Bern Ripka, said that decision was driven by state officials’ fear of succumbing to municipal bankruptcy.

“Bankruptcy seems like a cop-out, and it seems like government is failing,” Clark told the Guardian. “Balancing the budget seems like the government’s gaining ground, functioning properly.” To balance the budget, he continued, the city used the Flint river until a new water system was operational, while still charging sky-high water rates for Flint residents.

“They were able to create a budget surplus,” Clark said. “Emergency managers, for them, that’s the best case scenario. They look like they’re executing flawlessly in their plan. Governor Snyder avoids the headache of Flint going bankrupt.”

In a Rico statement filed to federal court, the attorneys said state officials, contractors and emergency managers appointed to run Flint had the “the intent and purpose of balancing the Flint City budget through a pattern of racketeering activity.”

“This association … misrepresented the suitability of the toxic Flint River water to Flint’s residents for approximately a two-year period, and billed Flint’s residents at rates that were the highest in the nation for toxic water that was unsuitable for use,” the lawsuit stated.

“By collecting an estimated $50m in revenue during the two year period Flint was connected to the Flint River, Flint’s City budget deficit was reversed and resulted in a $3.3.m surplus as of June 30, 2015.”

Flint reconnected with the city of Detroit’s water system in October, after Snyder admitted the gravity of the situation was far worse than he initially understood. State officials have yet to declare that Flint’s water is safe to drink.

Chet Kern, co-counsel in the case, cited an April 2014 email from Flint’s water quality supervisor, Michael Glasgow, in which he said that officials were pushing for the water treatment plant to be operational far too quickly .

“If water is distributed from this plant in the next couple of weeks, it will be against my direction,” Glasgow wrote to officials with the state environmental agency. The lawsuit alleges that Flint’s emergency manager at the time, Darnell Earley, nonetheless forced the transition to meet an “aggressive deadline,” despite knowing the water treatment plant wasn’t prepared to properly treat Flint’s river.

“Why did they do that?” Kern said. “They did it to balance the budget of the city of Flint.”

The governor’s office didn’t immediately respond to a request for comment.

The case follows a flood of lawsuits that have been filed in recent weeks against key state officials and the private contractors hired to prepare the Flint water treatment plant for full-time operation. The lawsuits could potentially generate billions of dollars of damages.

The attorneys on Wednesday said they didn’t take filing a Rico lawsuit lightly.

He added: “The damages here can go on not only for a year or two, but for generations. The tenor of this entire area has been changed forever as a result of this scheme, and that’s why we worked hard to uncover the scheme.”

The attorneys asserted that the legal doctrine of governmental immunity won’t be an issue in the Rico case, as the numerous state officials have been named as defendants individually – not in their official capacity. The attorneys declined to estimate the possible financial damages associated with the lawsuit, but said repayment for water bills alone to Flint residents could exceed $50m. Appropriate damages determined by the court will be tripled, as stipulated under civil Rico statute, said Kern.

Several investigations by federal, state, and local agencies are ongoing and could potentially lead to criminal charges .