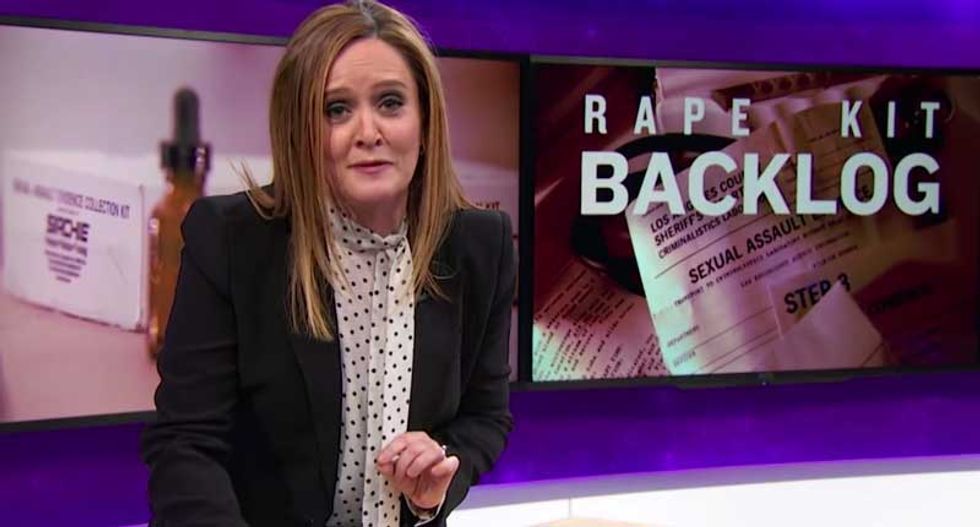 Governor Deal signed Georgia’s “The Pursuing Justice for Rape Victims Act” today, putting into law a requirement that Georgia law enforcement officials collect rape kits within 96 hours of the tests, and which also requires a report detailing the number of kits that have been tested and those that are still in process. Prior to passage, Georgia had an enormous backlog of the kits, which preserve DNA and other evidence of rape.

Samantha Bee brought the then-bill to national prominence when she lambasted the Georgia legislator Renee Unterman for  her intention to kill the House bill before it reached the floor of the Georgia Senate.

Pressure exerted on Unterman and her Georgia colleagues as a consequence of the comedian’s piece was monumental, and, according to the Atlanta Journal-Constitution, was cited in having pushed the legislation through, along with the careful message that rape-victim advocates took to legislators:

“There is no doubt about it in my opinion. The media played a very powerful role in this,” said Gwinnett Sexual Assault Center & Children’s Advocacy CEO and President Ann Burdges.

And while Bee singled out Unterman, the bill’s supporters made a conscious effort to avoid turning the debate into a battle between political parties or personalities. They stayed on message during a press conference and in other public attempts to revive the legislation by listing the problems the legislation would address.

“I think they (legislators) saw the bill for what it was: It was important legislation we needed to pass on behalf of survivors in our state,” said Jennifer Bivins, the president and CEO of the Georgia Network to End Sexual Assault. “I think they listened to us, and I applaud their efforts of not giving up and continuing to push forward through the last hours, literally.”

Jo Miller, a Full Frontal  executive producer and writer, is pleased that the show played its part: “If our show helped in some small way to give this blocked bill a second life, we are absolutely thrilled. But the real credit goes to the legislators and rape-victim activists in Georgia who have been working their butts off to get it passed.”

But those who thought that Unterman would see the short-sightedness of her position--that requiring the testing of rape kit bills was unnecessary because the problem was under control--may be surprised to find out that she has not changed her position. She still insists that there was never a problem requiring a state law to fix it, and she says that Democratic attempts to pressure her backfired:

“What’s ironic is that the Democrats used the issue as a wedge, but in the end I ended up using it as a negotiating tactic,” she said. “I got a lot of leverage. And I didn’t mind using the leverage because the system was working. If it was a do-or-die bill that was critical or sensitive, I wouldn’t have used it. But it was not. The infrastructure was working, and there’s no need for it,” Unterman told the Journal-Constitution.

As for Miller, she and her staff are quietly celebrating the power of the show’s mordant writing: “Usually satire makes no difference and we know that,” she says.

“So on the rare occasions when it does, hey, bonus!

WATCH: Devin Nunes gets slapped down after ranting about ‘faculty lounge Marxists’ at diversity hearing

Rep. Devin Nunes (R-CA) was called out Wednesday during the House Permanent Select Committee on Intelligence hearing on diversity, equity, inclusion, and accessibility within the Intelligence Community.

Nunes accused the Intelligence Community of "infatuation with left-wing dogma" and complained about "seminars given to military service members focusing on the dangers of white supremacy and systemic racism."