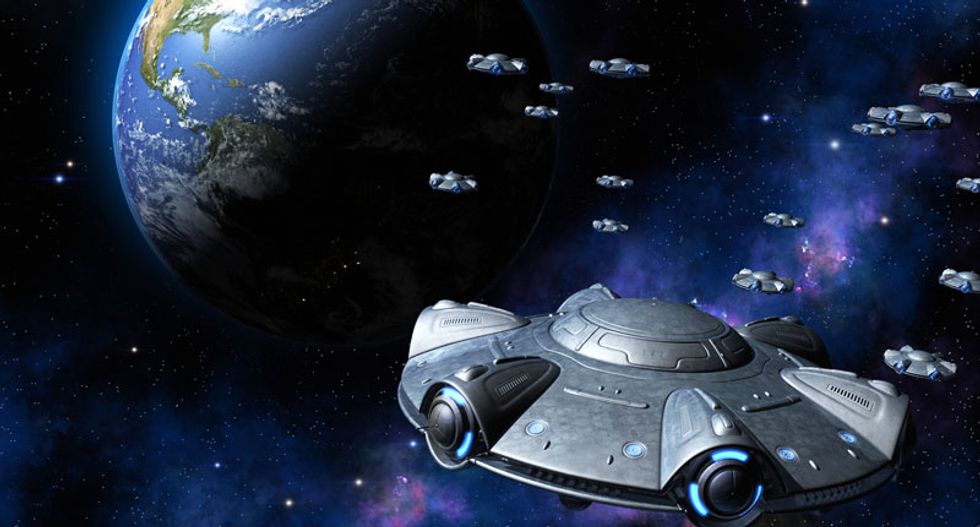 Heeding the warning from theoretical physicist Stephen Hawking that Earth may be unwittingly advertising its presence to intelligent life on other planets, two astrophysicists have proposed using lasers to cloak the planet's existence, reports Phys.org.

According to a paper submitted to the Royal Astronomical Society, Columbia Professor David Kipping and graduate student Alex Teachey explain that a burst of light from lasers would make it look as if Earth didn't exist when it passed it front of the sun.

Scientists have warned that intelligent beings elsewhere may search for planets the same way we do -- spotting them as they pass in front of stars and temporarily block out the light. The two researchers propose using bursts of light from lasers during Earth's transit periods.

The two authors of the new study suggest that transits could be masked by controlled laser emission, with the beam directed at the star where the aliens might live. When the transit takes place, the laser would be switched on to compensate for the loss of light emissions.

"There is an ongoing debate as to whether we should advertise ourselves or hide from advanced civilizations potentially living on planets elsewhere in the Galaxy," Kipping explained. "Our work offers humanity a choice, at least for transit events, and we should think about what we want to do."

The researchers suggest emitting a continuous 30 MW laser for about 10 hours, once a year, would be enough to eliminate the transit signal at the visible light end of the spectrum.

"Alternatively, we could cloak only the atmospheric signatures associated with biological activity, such as oxygen, which is achievable with a peak laser power of just 160 kW per transit. To another civilization, this should make the Earth appear as if life never took hold on our world", said Teachey.

According to Hawking, alien civilizations might be looking for planets like Earth that are rich in resources for colonization.