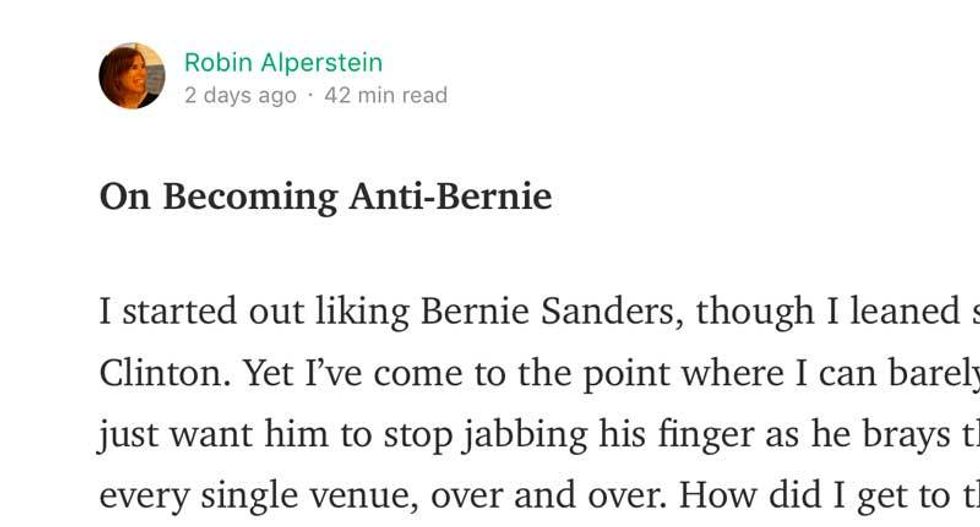 You may have seen this "On Becoming Anti-Bernie" piece, which is going around the internets. It's one of the top three most popular posts on Medium's politics section, has 1.4k likes, and over 600 comments. But who is the author? Robin Alperstein? She's a corporate lawyer who specializes in defending hedge funds but also represents the occasional nanny-abusing, jet-setting, Chilean aristocratic Upper East Side couple.

Lest you think I'm bringing up Alperstein's biography because I can't rebut the substance of her argument, I'll go through a mere sampling of its flaws.

Let's start with one of her bald-faced lies. Alperstein writes that Sanders, "literally pushed his wife away from a lectern ('don’t stand there!') on the air." Actually, Bernie gestured. He never touched her. And there is video. So Alperstein either didn't watch it (is "lazy and unprepared," which are literally the words she uses to describe Sanders) or she's a liar.

Also, as a Clinton supporter, does Alperstein really want to make this election about the relationship between the candidate and his or her spouse. By all means, as a Bernie supporter, I'd be happy to.

But the piece is generally chock full of distortions and myths that persist despite lack of evidence: Sanders hasn't accomplished anything (which is weird because he has and his nickname is the Amendment King); he never compromises (which is even weirder since Alperstein points to examples of compromise in the same piece); has no foreign policy experience (he has more foreign policy experience than Ronald Reagan or Barack Obama did when they ran for first election, was right on Iraq. And Clinton was wrong on Iraq, but to be fair, her being wrong shouldn't be limited to that one incident. She's also been wrong on Libya, Haiti and Honduras, where she legitimized a coup that has rendered the country the "murder capital of the world.")

The piece also uses glaring double standards. It smears Sanders as "lazy," while attacking Sanders for his tone. I guess she's showing instead of telling. So, well played Alperstein. It attacks Sanders on his temperament, which is so important, it has its own "temperament" subsection: "Sanders is crotchety," Alperstein writes. And, when questioned, he apparently becomes, "testy and sarcastic." If temperament is fair game, that's great news for Sanders supporters. Because we can now talk about Hillary's cold yet fake, awkward yet disingenuous demeanor, yes?

Alperstein condescendingly writes that Sanders "doesn’t seem to have an 'inside voice'." Shall we talk about the cadence or volume of Clinton's voice?

Perhaps my favorite critique is that he gets "red-faced." I won't dignify this by responding to it beyond saying talking about a candidate's physical appearance is not a good look.

OK. Now back to Alperstein. Who is she, you ask? Well, she's a partner at Becker Glynn. And, according to the website, she specializes in

She has literally dedicated her professional life to fighting for the corrupt fat cats Sanders is fighting against. It's really hard to believe that there was ever a time she "liked Bernie Sanders," which she claimed she did though she "always leaned Hillary."

But there's more. Alperstein also represented Chilean aristocrats Malu Custer Edwards and Micky Hurley,  who were sued for trafficking and abusing their nanny, whom they brought with them to the United States. The nanny was able to escape thanks to contacting Safe Horizons. Alperstein said, "the claims are completely without merit and will be fully refuted in court." The Department of Labor ordered the couple to pay the nanny $6,302 in back wages.  And this isn't the only example of the socialite couple being accused of untoward behavior. A photographer accused the husband of withholding payment. He also published an email exchange in which the husband wrote, I'm not kidding,

Remember, you are ALWAYS going to be from a different class, you were born where you were born, and even if you were reborn a billion times, you will never have a Baroness for a grandmother like me. This is what I get for working with street trash like you.

He signed off the email by writing, "Goodbye, great-grandson of a seamstress."

Of course everyone deserves a lawyer. There is nothing inherently wrong with Alperstein deciding to put her law degree to work by fighting for the rights of hedge funds and corporations to defraud people. There is nothing unethical about representing over-the-top parodies of rich, classist socialites who abuse their nanny.

But this person may not be the most damning critic of Bernie Sanders. And her endorsement of Clinton is about as surprising as Lloyd Blankfein's. That's all I'm saying.