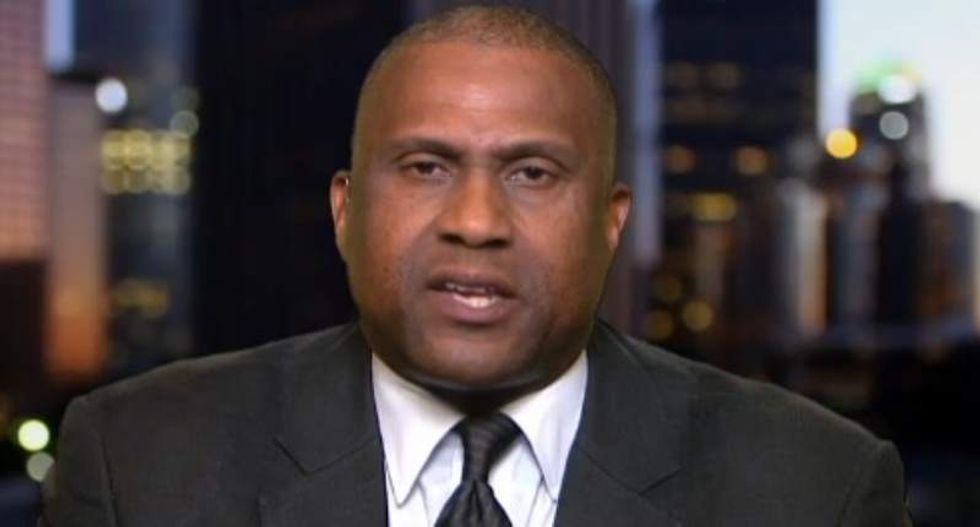 "You almost feel sorry for them when you see that kind of white-supremacist language on display," Smiley told MSNBC host Lawrence O'Donnell. "I just pushed them both higher up on my prayer list, because it's just sickening and sad to see that they do not have the respect -- they do not revel in the humanity and the dignity of all citizens, and particularly African-Americans."

The conversation between O'Reilly and Trump on Fox News on Tuesday, Smiley said, was an example of the Republican Party's "Shakespearian, Orwellian and definitely anti-American" tendency to sabotage itself.

O'Donnell opened the segment by showing footage of the Fox host telling Trump, "Let's talk about the minorities."

"I guess you know by now that any discussion between two old white guys that begins with, 'Now the minorities, let's talk about the minorities' is not going to go well," O'Donnell observed.

The Fox host then told Trump he defended him from Smiley's criticism. When Trump said he would bring jobs to African-American communities if elected president, O'Reilly wondered how he would do so when so many "have tattoos on their foreheads."

Later during the show, O'Reilly rejected the idea of prejudice on his part, saying that he did not know anyone who is racist, and that he had retained the same black assistant for 25 years.

"I stand by what I said earlier: that Donald Trump is a racial arsonist. And even more sadly, Bill O'Reilly is a race-baiter," Smiley said after watching the footage of the Trump-O'Reilly interview. "This is a quintessential example of the mainstream media --certainly Fox News -- coddling one Donald Trump with these kinds of racial remarks."