There be dragons? Creatures you might find on a real journey to the center of the Earth 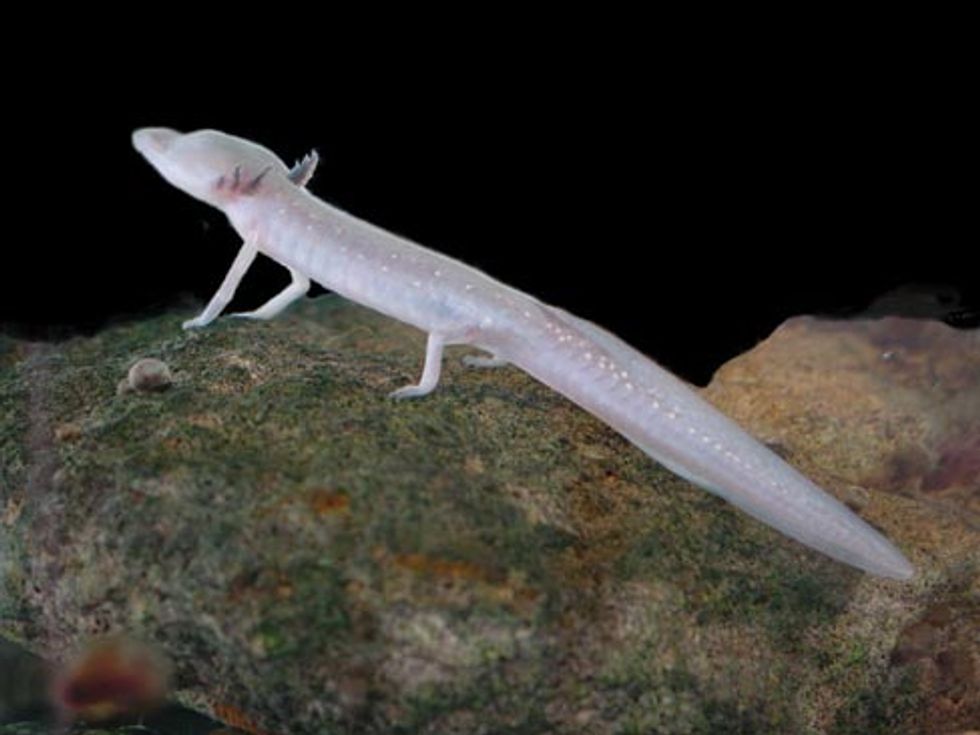 Who knows what wonders may lie beneath our feet. Herds of prehistoric creatures in deep subterranean caverns were described in Jules Verne’s novel Journey to The Centre of The Earth. And when 17th century scientists discovered the first troglobite – a creature that lives permanently in a cave – they initially thought it was the offspring of a dragon.

Science, of course, has a habit of turning the fantastic into the prosaic. But 150 years on from Verne’s work, researchers have actually begun a project to drill through the Earth’s crust for the first time, hoping to penetrate more than 5km beneath the sea bed to reach the mantle below. Needless to say, it is most unlikely to reveal monsters living inside the Earth. But if we do look down in search of life, what do we find?

The best way to find underground creatures is to travel into the depths of a cave. The first things you’re likely to come across are spiders – big ones, such as Meta menardi (the European Cave Spider). Meta is actually a troglophile, a species that can spend its whole life underground but can also live outside caves. Living to at least 30 metres inside caves, it makes webs to catch flies, but mostly preys on woodlice and millipedes on the cave walls. Look up and you may see its teardrop-shaped egg cocoons hanging from the roof.

Cave spiders are often very big. They grow slowly, live for long time, and need to store fat from their infrequent meals. Meta is big, but dwarfed by a spider discovered in a cave in Laos in 2001. Heteropoda maxima, the giant huntsman spider, has a leg span of 30cm and is the world’s largest spider by diameter.

You might also encounter bats. They are trogloxenes, animals that live in caves, but collect food from outside. Some species, such as the whiskered bat, spend the entire winter underground but don’t normally hibernate more than a couple of hundred metres inside.

Beyond the deep threshold of a cave, it is totally dark. No sunlight means there are no plants to produce food and so no herbivores. Instead, cave communities depend on bacteria and fungi that decompose any organic matter that dies or is washed into the cave. This is then consumed by legions of tiny mites, crustaceans and insects – referred to as detritivores – and they in turn are eaten by predators.

These are common in almost all habitats, but in caves become the predominant mechanism for recycling dead material once it is totally dark. The deeper underground you go, the less food resource is available and so fewer species can survive. The exception are the bacteria species that appear completely independent of terrestrial energy sources, thriving on minerals dripping from the cave walls.

Unable to see prey or predators, troglobites are often eyeless and rely on other receptors, including a highly developed sense of touch. They start to appear once there is total darkness and become increasingly adapted the deeper you go. Specialist cave beetles such as Leptodirus hochenwartii have evolved extraordinarily long antennae and elongated legs for this purpose. Being eyeless saves energy, and Leptodirus saves more by growing directly from a larva into an adult beetle, whereas its overground relatives have three larval states.

In some North American caves, you may find Mexican tetras (Astyanax mexicanus or blind cave fish) or the Texas blind salamander (Eurycea rathbuni). Some Astyanax have eyes and others don’t and the two can interbreed, providing valuable evidence that species can vary and evolve hundreds of metres underground. Eurycea is very similar to the dragon-like Proteus, but the species are only distantly related, giving us a good example of how different animals can evolve similar features in parallel.

Astyanax and Eurycea use pressure sensors to detect food and Proteus has the most sensitive sense of smell of any amphibian. It also uses electric fields to locate prey and can survive for ten years without food. After 16 years, Proteus becomes sexually mature in a juvenile form and may live to be over a hundred. Because there is little energy in a deep cave, troglobites often take a long time to mature, so have longer generation times than their surface-living relatives. With limited resources for reproduction, they tend to lay fewer eggs, but often spend more time protecting them.

Go deeper, and at 1,000 metres you can still find life. Most inhabitants at this level are tiny invertebrates such as white springtails and mites. But there are also larger species such as Geophilus hadesi. Found in Croatia at depths of 1,100 metres, this eyeless centipede is aptly named after the Greek god of the Underworld.

The deepest terrestrial animal found in a cave is a wingless, eyeless insect. Plutomurus ortobalaganensis (a springtail) was discovered living at a depth of 1,980 metres in what is also the world’s deepest known cave, Krubera-Voronja in Russia. Pluto was the Roman god of the Underworld and synonymous with Hades.

Many cave systems are isolated from the rest of the world like islands in an ocean and, as a result, are very fragile habitats. The creatures that live in them tend to have become genetically very similar to the rest of their species thanks to inbreeding, putting them at risk of genetic deformities and even extinction if their environment changes even slightly.

When 18th and 19th century navigators explored unknown islands, they often found new species, evolved as a result of millennia of isolation, and the same is true of caves. Each new cave has the potential to harbour unique species, and teach us more about how life can survive in extreme habitats. There is still a lot more to find in the dark.