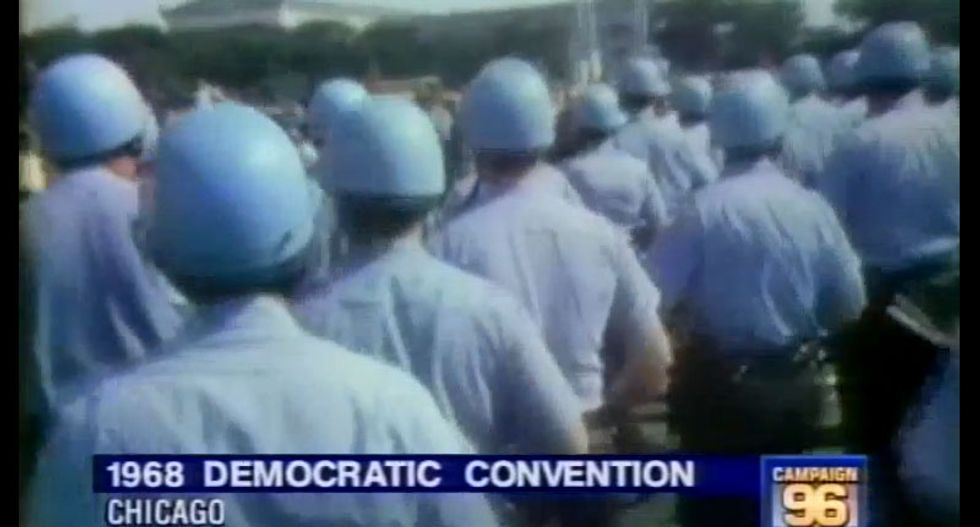 Riot police advance on protesters at the 1968 DNC (Screencapture/CSPAN)

In 1968, I was the first in my family to attend college, but the promise of higher education appeared rather worthless as the nation descended into an orgy of violence that seemed to signal the breakdown of the American democratic experiment. The year witnessed the Tet Offensive in Vietnam, campus unrest, assassination of Martin Luther King Jr., uprisings in the predominantly black inner cities that were finally quelled through military occupation, assassination of Robert Kennedy who was seeking the Democratic Presidential nomination, and what was termed “a police riot” at the Chicago Democratic National Convention where police beat demonstrators as well as by-standers while the whole world was watching.

On the political level, the antiwar candidacy of Eugene McCarthy convinced President Lyndon Johnson to not seek reelection, yet the Democratic nomination went to Johnson’s Vice-President Hubert Humphrey. Alabama Governor George Wallace garnered national support for the Presidency on a third party ticket by playing upon white backlash to the Civil Rights Movement. Richard Nixon was somewhat more subtle; employing the race cards of law and order and the Southern strategy, along with his “secret” plan to end the war in Vietnam, to narrowly defeat Humphrey for the Presidency. Nixon, however, overreached in the Watergate crisis which exposed the threat posed to American democracy by his imperial Presidency. Yet, somehow the system survived.

And today we see Citizen Donald Trump embracing deportation, torture, religious discrimination, and violence to address the nation’s ills. Promising to counter frustrations with political correctness, crime, assertive blacks, illegal immigration, terrorism, the nation’s longest war in Afghanistan, bank bailouts for Wall Street, and stagnant wages, Trump has his largely white supporters raise their right hands in a gesture of allegiance that is eerily similar to the Nazi salute under Adolph Hitler. And it is not reassuring to remember that fascism came to Germany through the ballot box. Nevertheless, parallels between the contemporary political crisis and the violence of 1968 provide hope for the resilience of American democracy as the level of violence in the streets has not yet descended to the depth of the late 1960s, but the racial component of our current political malaise certainly reveals that the election of Barack Obama did not signify a post racial America.

The politics of the late 1960s were fueled by the Vietnam War, while contemporary insecurities are fostered by fears of terrorism and the Islamic State. The Tet Offensive launched by the North Vietnamese and their Viet Cong allies against urban centers in South Vietnam demonstrated that assurances by President Johnson and the American military that the war was going well and there was light at the end of tunnel were patently false. While it may be argued that American forces eventually rallied on the battlefield and won the Tet Offensive, the fighting exemplified that the war was not winding down and fostered a growing antiwar movement. Minnesota Senator Eugene McCarthy took advantage of this discontent and almost toppled Johnson in the New Hampshire Democratic Primary. The McCarthy challenge prompted Johnson to announce that he would not seek reelection, while Robert Kennedy decided to enter the race. McCarthy and Kennedy battled for the antiwar vote in the Democratic primaries, where Kennedy’s energy and emphasis upon combating poverty seemed to resonate with black and Latino/a voters.

Martin Luther King Jr. was also increasingly developing a focus upon issues of economic inequality while criticizing American capitalism and linking the expense of the Vietnam War to the lack of funds available to address poverty on the home front. In April 1968, King was in Memphis, Tennessee, where he was supporting a strike by black sanitation workers seeking better working conditions and wages. His assassination provoked an uprising by frustrated black citizens in many of the nation’s largest cities. The U. S. government responded to this unrest with military force and the occupation of many cities amid heavy fighting. We are clearly not at this level of violence today, but the scars from 1968 remain, accompanied by a growing economic inequality along racial lines. The legacy of the Black Panther Party in terms of monitoring the police resonates with the Black Lives Matter movement that documents and confronts police brutality and violence toward young black men. Protests led by Black Lives Matter activists have led to confrontations on the streets of Baltimore, Chicago, and Ferguson, Missouri where police have resorted to a militarized approach to suppress dissent.

As the cities simmered in 1968 and the war continued in Southeast Asia, the antiwar movement seemed to coalesce around Kennedy when he won the California primary in June. As Kennedy was celebrating his victory, however, he was gunned down by an assassin. McCarthy was unable to attain the Democratic nomination as the party establishment supported Johnson’s Vice-President Humphrey who did not enter the primaries. In response to the coronation of Humphrey, protestors from around the nation descended upon the Chicago Democratic National Convention. Chicago Democratic Mayor Richard Dailey unleashed his police force upon the demonstrators in an orgy of violence which the Walker Commission, formed to investigate the street fighting in Chicago, later found to be “a police riot.” Disgruntled by the convention, McCarthy refused to campaign for Humphrey; instead, McCarthy covered baseball’s World Series for Life magazine. Humphrey’s candidacy gained steam in the final weeks of the campaign, and McCarthy’s active support might have made a difference.

While a repeat of the 1968 Chicago convention does not seem likely, the Republican Party establishment’s plan to deny Trump the nomination through a brokered convention has provoked assertions by the businessman that his supporters would riot and might trigger a third party candidacy by Trump that would splinter the party.

The presidential campaign of 1968 also featured the third party candidacy of Alabama’s George Wallace, who hoped to appeal to white Southerners and a disillusioned white ethnic working class in the North through his opposition to racial integration, court-mandated school desegregation bussing plans, affirmative action programs, and the power of the federal government. He also promised to win the Vietnam War and placed General Curtis Lemay on the ticket as his Vice-Presidential running mate. Similar to Trump’s rhetoric, Wallace promoted violence against demonstrators; he insisted that he would have no problem with running over protestors who might attempt to disrupt his motorcade. This anger may have backfired for Wallace as toward the end of the campaign many of his rallies were increasingly disrupted by violent outbursts. The confrontations seemed to give some Wallace voters pause, and electoral support for his candidacy declined. It remains to be seen what impact increasing altercations between Trump supporters and demonstrators will have on the businessman’s candidacy, but they are guaranteeing that Trump continues to receive the lion’s share of media coverage.

Many Wallace supporters found a home with the Republican nominee Richard Nixon whose policies were somewhat more subtle than the Alabama Governor. Nixon’s Southern strategy and slogans of law and order along with references to the silent majority—a term which Trump has now appropriated—sought to entice whites concerned about images of black crime and affirmative action as threats. Following the Civil Rights Act of 1964 and Voting Rights Act of 1965, the former solidly Democratic states of the South defected to Nixon and the Republican Party, where they remain solidly red states (although Obama made some inroads in the states of Virginia, Florida, and North Carolina). Recognizing increasing resistance to the war in Vietnam, Nixon attempted to hedge his bets by advocating peace with honor and insisting that he had a “secret” plan to end the war. Nixon’s strategy resulted in a narrow electoral victory over Humphrey that ended the political turmoil of 1968. The system had survived, but American politics moved in a more conservative direction after the turmoil of 1968.

The historical context has changed, but many of the divisions that plagued America in the late 1960s are still with us. The war in Southeast Asia finally ended, but questions about the viability of American intervention abroad remain with failed military actions in the Middle East. Concerns about terrorism have replaced insecurities regarding communist subversion, but these fears still have many Americans willing to abandon constitutional liberties in favor of security. The nation remains divided along racial lines, while corporate America receives bailouts from Congress and unlimited political influence through Supreme Court decisions such as Citizens United. These contemporary tensions are exacerbated by a demagogue such as Donald Trump who is far more gifted at manipulating anger than Wallace or Nixon. If we are not careful we may reap a whirlwind more threatening to American democracy than the 1968 winter of discontent.

How we laughed in 2021! Yes, the year was plagued by Covid, fires and floods... but it did throw up some weird and wonderful news to lift the spirits.

Here is our selection: