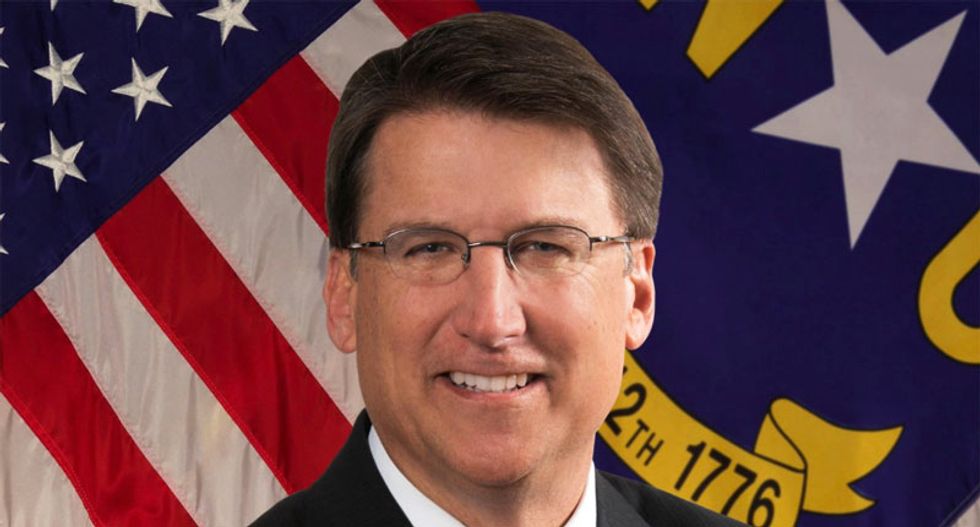 Jobs are now officially being lost in North Carolina as a result of the state's new law wiping out local protections for the LGBT community and regulating public bathrooms usage by transgender people — which was passed quickly by the Republican legislature and governor after the city of Charlotte had enacted an ordinance to allow transgender people to use public bathrooms matching their gender identities.

In a recent radio appearance with Christian-right activist Tony Perkins, the state's Lt. Gov. Dan Forest said that pressure from the business community against the new law was only part of a public posture for LGBT activists, and did not actually reflect the business community's true opinions. "And one in particular said, ‘Well you know, they [LGBT groups] have a really strong lobby,’" Forest said, recounting a conversation he had with one business leader.

But now, actual businesses are taking their projects out of the state.

Lionsgate Films is canceling the pilot for a Hulu show — fittingly called "Crushed" — for which pre-production work had been set to begin in early April and then filming in May, The Charlotte Observer. The cancelation has just become public now — but the studio first informed local employees and contractors of the cancelation on March 24, one day immediately after Gov. Pat McCrory had signed the controversial new law.

The show, about an African-American family with a Napa wine business, will now film instead in Vancouver, Canada. (And while that's in another country, it will at least have sunrises and sunsets coming from the proper directions out on the West Coast.)

The show's local production coordinator Jennifer Irvine also faulted the state's elimination of a tax credit program for TV and movie productions in 2014.

“When we lost our tax incentives a year ago, I lost my work at that point,” said Irvine. “We were just starting to trickle back. And now when (McCrory) signed that bill, he tainted the film industry all over again.”

In addition, PayPal has announced the cancelation of a new global operations center in Charlotte, which the company said would have employed over 400 people in skilled jobs. The company had first announced the plans for the new office two weeks ago.

"In the short time since then, legislation has been abruptly enacted by the State of North Carolina that invalidates protections of the rights of lesbian, gay, bisexual, and transgender citizens and denies these members of our community equal rights under the law," PayPal said in a statement.

"The new law perpetuates discrimination and it violates the values and principles that are at the core of PayPal’s mission and culture. As a result, PayPal will not move forward with our planned expansion into Charlotte."

The company also stated its "regret that we will not have the opportunity to be a part of the Charlotte community and to count as colleagues the skilled and talented people of the region," but also that they "remain committed to working with the LGBT community in North Carolina to overturn this discriminatory legislation, alongside all those who are committed to equality."