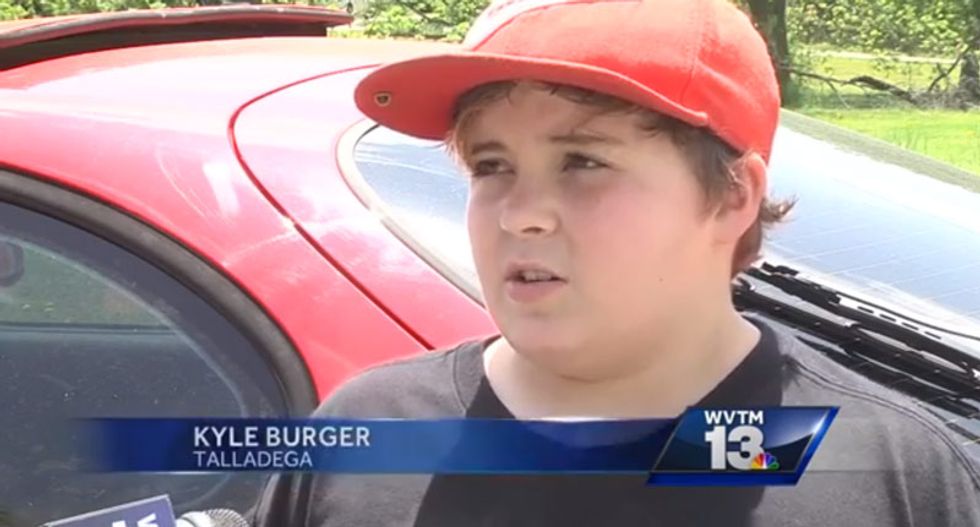 An eleven-year old Talladega boy bragged that the burglar he shot while the boy was home alone "started crying like a little baby."

Chris Gaither narrated the story to WVTM-13 reporter Kyle Burger, who referred to the arrested burglar in his written article, published alongside the on-camera interview, as "a baby that learned his lesson."

On camera, Gaither told the Alabama reporter: "I seen the guy and I warned him four times to get out, and then he ran upstairs. And he came back down with a .38. I told him I was going to shoot him if he didn't get out of the house.

"And I went and grabbed a 9mm," Gaither continues. "And then he went outside and that's when I started shooting. He got over to the fence."

At this point in the interview, Gaither's mom interrrupts him, saying, "Tell him about pointing the gun at you, baby."

"Oh right. He pointed the gun at me when he was coming downstairs," Gaither said. "And then I told him I was gonna kill him and all that. And to get out of my house.

"And I shot one time and then he started running. I shot a bunch of times, and missed him all eleven times."

The boy admitted to being "very scared," when asked by Burger. He said that he didn't know the man personally, but he knew that he was a "meth-head."

"I shot through the hamper he was carrying,” Gaither said. “It was a full metal jacket bullet. It went straight through the back of his leg. He started crying like a little baby."

When asked if the suspect had said anything to him, Gaither replied: "He didn't really say anything. Just F-you when he walked down the stairs."

The 9mm gun belongs to Gaither's step-dad. "I play Zombies for target practice," the boy said, noting that it is step-dad who had been teaching him how to shoot.

"I shot all twelve bullets that was in the whole clip."

Gaither is interrupted by Burger, who says "All right!" and starts laughing.

Burger asked Chris Gaither if there was a lesson that he had learned that he wanted to pass along to the station's viewers. "Be brave and you'll be okay," he replied.

"And trust God," his mother added.

Watch video, uploaded to YouTube by WVTM 13 News, below: