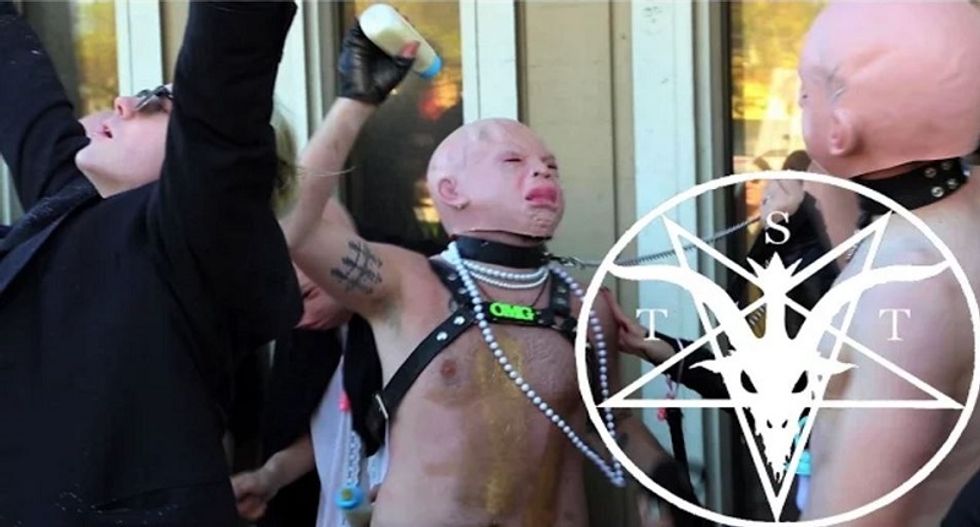 The Detroit chapter of the Satanic Temple (Screenshot/YouTube)

Anti-abortion activists were met head-on in Detroit by the city's chapter of the Satanic Temple, who trolled them by dressing up in baby gear and decrying "fetal idolatry."

According to the Temple's Detroit chapter leader, Jex Blackmore, "the anti-choice movement’s obsession with, and mischaracterization of the fetus obscures medical reality and a woman’s constitutional right to choice."

Blackmore wrote, "The highly politicized anti-choice movement advocates for the abolition of Planned Parenthood, an organization that provides critical preventive and primary reproductive health care services to low-income women. The current cornerstone of their argument stems from a fabricated, fictional story that clinics 'sell baby parts for profit.'"

Video shows the Satanic Temple activists writhing and gyrating in front of shocked-looking anti-abortion protesters, who seemed frozen in place as they stared at the performance.

Blackmore pointed out that a Texas grand jury had cleared Planned Parenthood of any wrongdoing, and instead indicted the producers of heavily-edited and discredited videos that intended to implicate the health care provider in a cooked-up scheme to illegally sell fetal body parts.

"The strategy of elevating tiny human em­br­yos and fetuses to a rever­ence creates a fantasy in which the maternal body is both erased and criminalized," Blackmore wrote. "The Satanic organization believes that all people are entitled to make informed decisions about their health, family and future without coercion."

In addition to the Temple's guerrilla theater tactics, they are challenging the constitutionality of abortion waiting periods mandated by the state of Missouri in court.

Watch video from the Satanic Temple's street theater, as posted to YouTube, here: