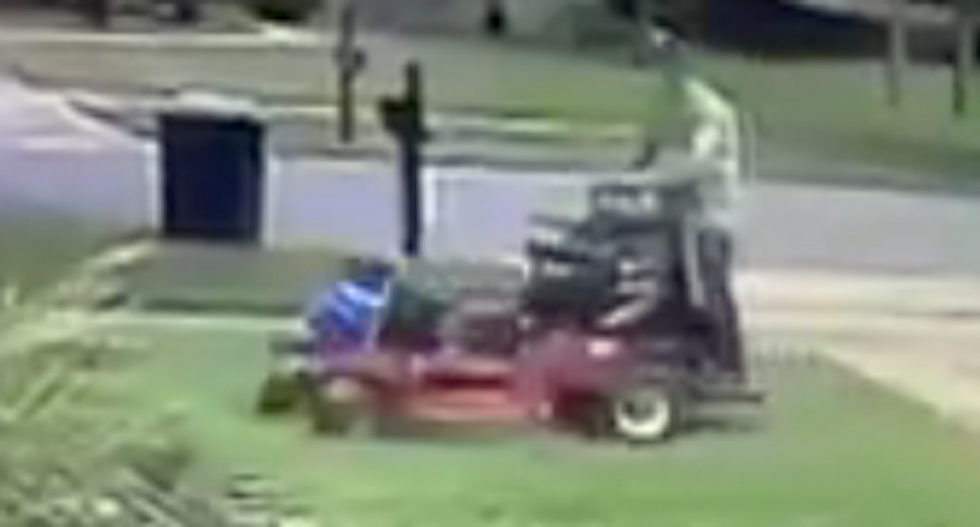 A landscaper has been banned from working in an Orlando neighborhood after he ran over a resident's Donald Trump campaign sign.

The resident of the Citrus Chase subdivision found his Trump sign mangled in the front yard, and he watched surveillance video to spot the culprit, reported WKMG-TV.

The video showed a landscaper plow into the sign with a riding mower and then back up, and he appears to run over the sign at least once more, although some of the action takes place behind a wall.

"Look at what our landscapers did," the resident complained on Facebook, where he posted the video. "I understand people may not like Trump but I have my rights to put this sign in my yard and it was no accident see for yourself!"

The neighborhood's homeowners association replied to the social media post, saying the worker had been removed from the crew and would not be allowed to work in the subdivision again.

The owner of the landscaping company said the 19-year-old worker was inexperienced and did not intend to run over the sign, repeatedly, but removed him anyway.

The resident, Josh Bosch, said his lawn had been mowed about a half hour before the sign was destroyed, so he's pretty sure the act was intentional.

"It's been there since, like, January, and it's never been hit by the landscapers," he said. "They either just mow around it or use their edger, because a lot of them have respect."

The Trump sign appears to be in violation of HOA rules -- which prohibit campaign signs more than 90 days before an election and requires their removal within 10 days of an election.

Republican voters backed Trump in Florida's March 15 primary, nearly a month before Bosch's sign was destroyed on April 19, and the general election won't be held until the Nov. 8.