WATCH: Procter & Gamble is taking this 'darkly brilliant' ad to the Olympics -- it will give you chills 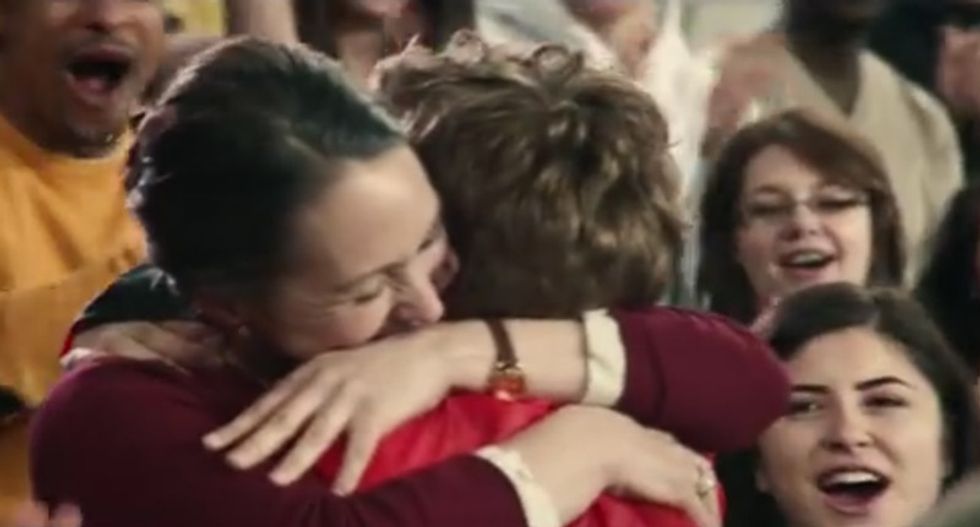 For people who don’t like football, Super Bowl Sunday is the day to run to the kitchen during the plays but sit so glued to the screen watching the ads. The Olympic Games takes Super Bowl ad excitement and multiplies it: sixteen days of airtime provide a lot of opportunities to wow a global audience.

Procter & Gamble posted a two-minute spot—its new ad, “Thank you, Mom,”—and dropped the mic.  Those who find themselves leaking water from their eyes at the sight of baby horses or little kids trying their hardest may want to stock up on hankies before watching this summer’s games.

The P&G ad takes its previous tributes to the sacrifices that makes moms make and adds danger, provoking a series of vignettes in which moms protect their kids from all kinds of threats — including those posed by Mother Nature herself.

The opening image is of a little American girl, pigtails held in place with bright pink elastic hair ties, staring frozen as a tornado rushes down on her. The threat of the swirling tornado is intercut with the image of the woman athlete entering the Olympics gymnastics arena. As the vertigo-inducing whirlwind bears down on her, Mom shepherds the little girl into the tornado cellar, saying, “C’mon. C’mon,”the same words the athlete hears as she begins her routine.

Other kids’ stories appear. First, a Brazilian girl in a car, her mom speaking to her in Portugese, and the startling accident, which may raise viewers’ anxiety levels, before the mother’s assurances. Then, a young Chinese boy and his mother in an elevator during an earthquake. A German boy is terrified as he sits in a jet being rocked by the wind, until his mother assures him that “It’s just a little turbulence.”

But the threats to children are not just from the accidents over which people don’t have control. P&G calls out those who torment kids, too, first by a scene in which the German boy is bullied, and then by watching the Brazilian girl get sexually harrassed out in the street. Each time, the mother is there to not only provide reassurance, but also to step in as the protector who will take on the world to keep her child safe. The Chinese athlete calls his mother in tears from his dormitory, defeated by a bad encounter with a mean coach. What she says to him moves him forward.

P&G capitalizes on the stereotypes of maternal behavior, but cuts around any objection by referencing a postmodern world in which the stresses and pressures that children face are as much the products of toxic culture as they are the vagaries of nature and physics. The emotional resonances provoked by the ad are echoed in the violins and piano of the composition, “Experience,” by Luigi Einaudi.

Adweek has already proclaimed the ad “darkly brilliant,” and declares that other ad producers are going to have to work hard to match P&G. And while ads featuring moms and athletes are old news, according to the magazine, this new ad takes the familiar genre and makes it more umbrous:

“If the vignettes here seem particularly dramatic, that's because P&G has to keep the campaign evolving even after it perfected the form back in 2012 with "Best Job.”