'We all think you're a terrorist': Texas schoolboy says teacher humiliated him with anti-Muslim hate speech 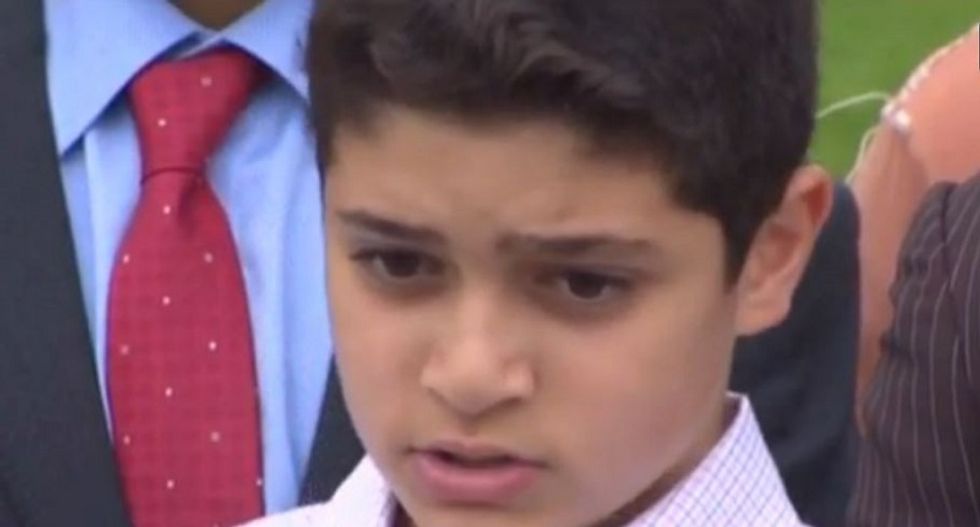 The family of a Muslim child is upset because they say the 12-year-old's teacher called him a terrorist in front of his classmates, KHOU reports.

Waleed Abushaaban, an honor student at a middle school in Fort Bend County, Texas, said the class was watching a movie on Thursday when his teacher directed the hateful words his way.

"We were in the class watching a movie,” Waleed told KHOU, “and I was just laughing at the movie and the teacher said, ‘I wouldn’t be laughing if I was you.’ And I said why? She said, ‘because we all think you're a terrorist.'"

Abushaaban said the class was watching the soccer film, Bend It Like Beckham, after completing testing when the comment was made. He said the teacher's comment prompted the other students to start mocking him.

“They were like, ‘oh I see a bomb!’ and they started all laughing and making jokes," he told the station. "I was upset and I felt like I was put in the corner and like everybody was just looking at me.“

The school district has removed the teacher from the classroom while it conducts an investigation. But Abushaaban's parents and local Muslim leaders want her fired.

“Just because my son is a Muslim doesn't mean he is a terrorist,” Malek Abushaaban told KHOU. “He's an American. He's as American as anybody else. He was born here. That's all he knows, is how to be an American."

According to KHOU, the family plans to keep Waleed at the school, and aside from wanting the English and Language Arts teacher fired, they want students and teachers to undergo religious sensitivity training.

In a statement sent to KHOU about the incident, Fort Bend Independent School District officials say the teacher claims she was trying to make a point about negative stereotypes, but did so poorly.

"While the teacher reports her statements were made in the context of trying to make a point about negative stereotypes, District officials do not believe that the teacher exercised the appropriate sensitivity expected of the District’s educators, and do not believe that the statements were made in a manner that is in keeping with the District’s Core Beliefs and Commitments," the statement reads.

It's not the first time a young Muslim student has been the target of anti-Muslim sentiment in Texas public schools.

Last year, 14-year-old Ahmed Mohamed was arrested when he brought homemade clock to school. Teachers and school police accused the child of making a "hoax bomb." Mohamed was cleared and in the midst of outcry over the incident.

Watch the report, from KHOU, here: