What Mongol history predicts for 'Game of Thrones' 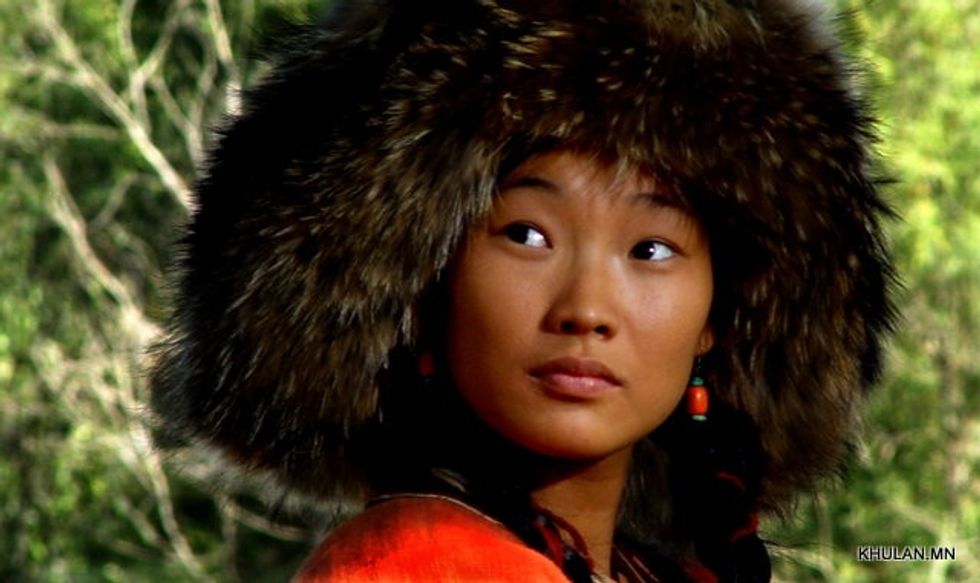 As season six of HBO’s Game of Thrones looms, speculation is rife. Is Jon Snow really dead? What do the clips featuring a blind Arya mean? And what are the implications of the return of the Dothraki? This last question is the one that has got me thinking the most.

The Dothraki are one of Game of Thrones’s more interesting cultures, but we haven’t seen much of them since the first season. But then the dragon Drogon brought Daenerys back to the grasslands of the Dothraki Sea in the last episode of season five, and we last saw her viewing an approaching khalasar – band of male warriors – with apprehension. The Dothraki culture is, as author George RR Martin has stated, inspired by the Mongols, the horse-lords who swept westwards from Central Asia in the 13th century.

The dark-haired, copper-skinned riders, organised in khalasars, each with a khal at their head, are nomads. They live in yurts and eat mostly meat: duck, goat and dog are offered to the pregnant Daenerys. The Dothraki are impressive horsemen; armed with a curved sword (arak) and lightly armoured in leather jerkins they rely on speed, numbers and good-quality horses for lightning raids. The Dothraki Sea is ringed with ruined cities, ravaged by the horse-lords; the Free Cities willingly pay them to stay away. 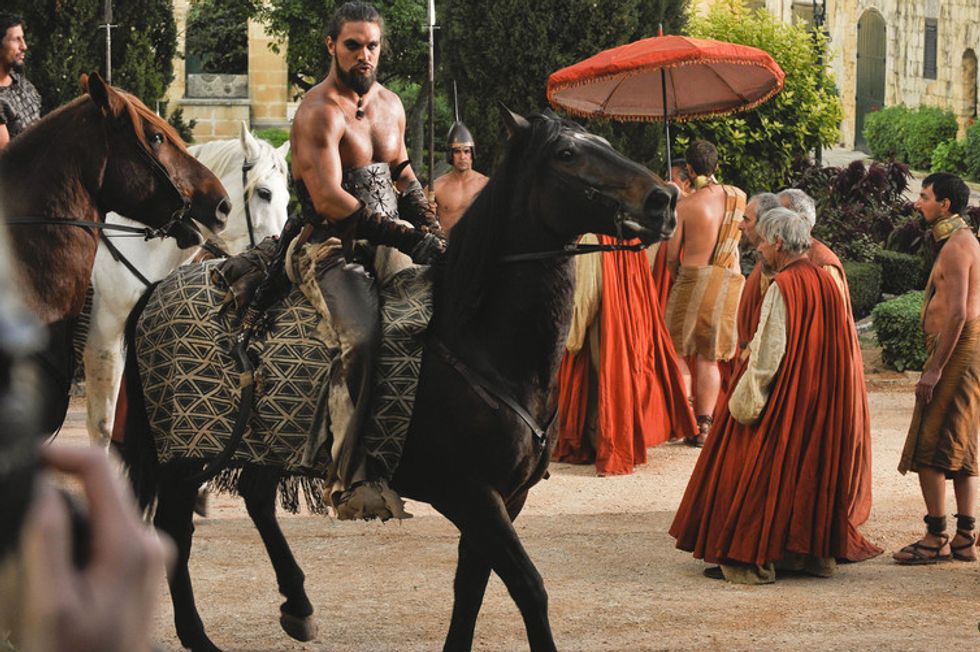 There is a large market in Vaes Dothrak, the city ruled over by the widows of khals, lying on the caravan route across the Dothraki Sea. Merchants from east and west trade there; the Dothraki seek novelties in exchange for their plunder, but they scorn trade, except in the slaves whom they sell on to the cities of Slaver’s Bay or through Volantis.

For all the Dothraki’s apparent barbarism, amply evidenced by their behaviour at Daenerys’s wedding, their language has a wonderfully metaphorical turn. Drogo uses kennings – short metaphorical phrases – to communicate unfamiliar concepts to his followers. He calls the sea “poison water”, ships “wooden horses”, and the Westerosi, “men in iron suits”. In Vaes Dothrak, Daenerys triumphantly forces down raw horse heart, convincing everyone that the child she carries is the prophesied “stallion that mounts the world”. Dothraki endearments: “Blood of my blood,” “my sun and stars”, “moon of my life” have a poetic ring. There’s no impoverishment of imagination among these people, who live so intensely in the natural world. 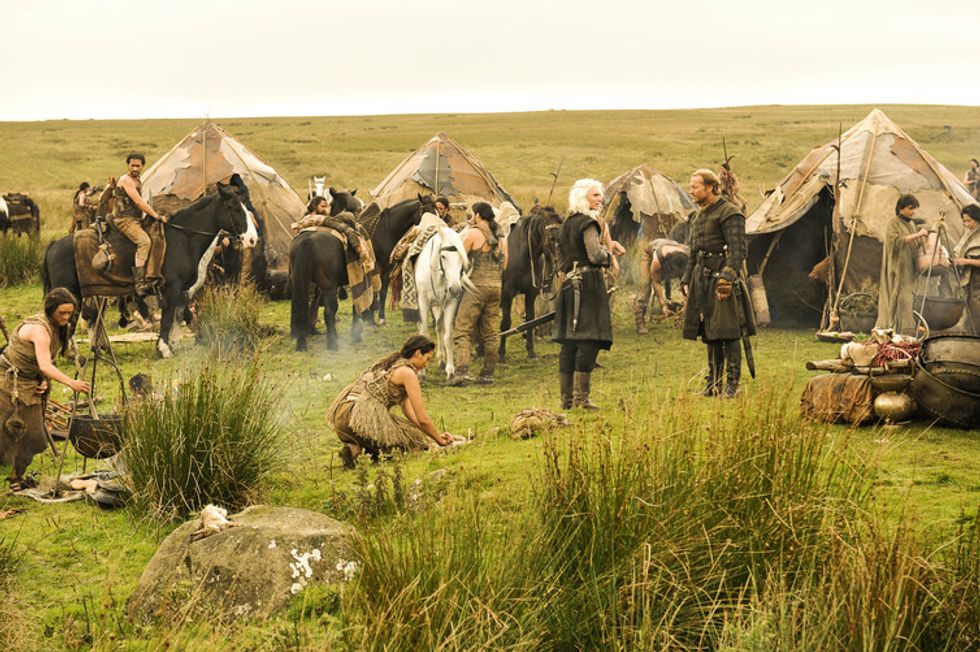 So what of their real-life alternatives – how might Daenerys fare with them? We know a reasonable amount about the Mongols from Western medieval sources and from their own Secret History of the Mongols, composed between 1240 and 1260, which recounts the rise of Genghis Khan. Together, these documents piece together a picture of medieval Mongol life.

One of the first Westerners to visit the Mongol orda (court, but the origin of our word horde) was Johannes de Piano Carpini. He set out from Kiev in 1245, sent by Pope Innocent IV to the new Great Khan, Güyüg. Johannes complains of thunderstorms and dust-storms, of hail so intense that 160 men drowned when it melted, of scorching heat and savage cold. He observes how little the Mongols washed and that they lived in yurts (gers), heated by horse-dung fires. Friendly enough among themselves, Mongols were prone to drunken binges fuelled by fermented mare’s milk (kumiss), and like the Dothraki they held all other nations in contempt.

Another cleric, William Ruysbroeck, journeyed to the Mongol capital Karakorum in 1253, bringing letters from King Louis IX of France to Möngke Khan. Here he found congenial company: other Europeans working there included the nephew of an English bishop, a woman from Lorraine who cooked Ruysbroeck’s Easter dinner and a French silversmith, who made ornaments for the Khan’s women. Ruysbroeck reports lively and ambitious curiosity about his homeland among the men at Möngke’s court, writing:

And they began to question us greatly about the kingdom of France, whether there were many sheep and cattle and horses there, and whether they had not better go there at once and take it all. 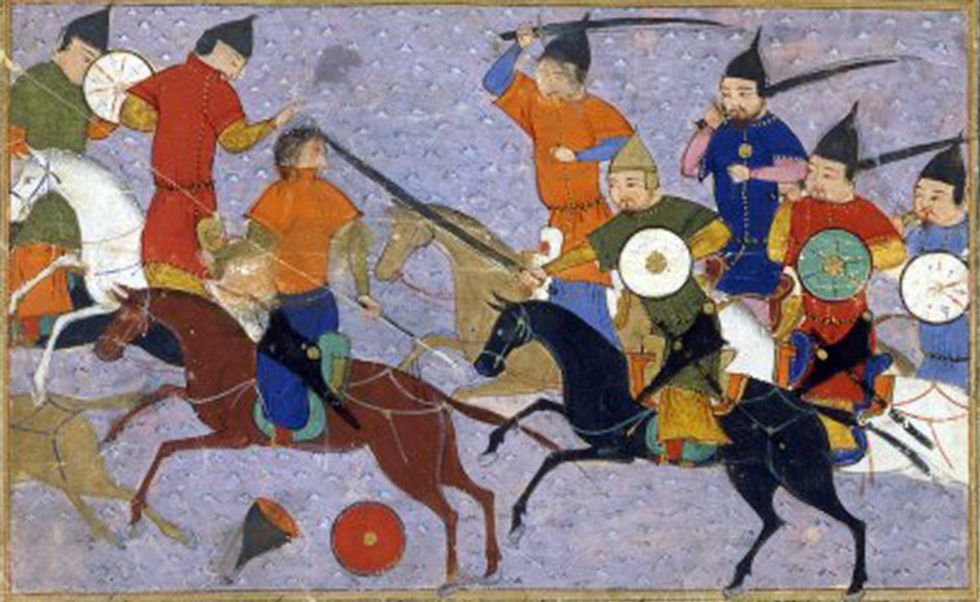 Mongols take on the Chinese.

Like Jorah Mormont, these Western churchmen became knowledgeable about Mongol customs; Ruysbroeck even picked up some of their language. The Secret History, the Mongols’ own chronicle, recounts the dramatic story of Genghis Khan’s life and contains some strikingly beautiful poetry. Genghis’s redoubtable mother is said to wield a great deal of executive authority, giving rise perhaps to the dosh khaleen, the widows who rule in Vaes Dothrak.

Multiple tough-minded wives, loyal blood-brothers and double-crossing allies all feature in the Secret History, along with incidental detail about Mongol customs. Captives would be measured against the linchpins of Mongol wagon-wheels, and those men who were too tall (and therefore reckoned dangerous) would immediately be executed while women, children and short men were enslaved. The inspiration for Daenerys’s heart-eating ordeal might be in the sheep-neck served at betrothal feast; Mongols hoped that the ensuing marriage would be as tough and enduring as that intensely chewy dish.

The Mongols established the largest land-empire the world has ever seen, stretching from the Pacific Ocean to the borders of Hungary and Poland, which might make things look good for Daenerys’s prospects. But unless she, like Ruysbroeck, can enthral them with tales of plunder to the west, I doubt whether the Dothraki will cross the Narrow Sea to help her take control of Westeros.

Yet, as the widow of a notable khal, Dothraki-speaking at that, Daenerys can surely, like Genghis’s mother, wield some authority and mobilise her new khalasar to bolster her position in Meereen. By the time the rescue party appears, Daenerys will be back on top, having earned her captors' respect. At least, that’s my prediction for the new season.